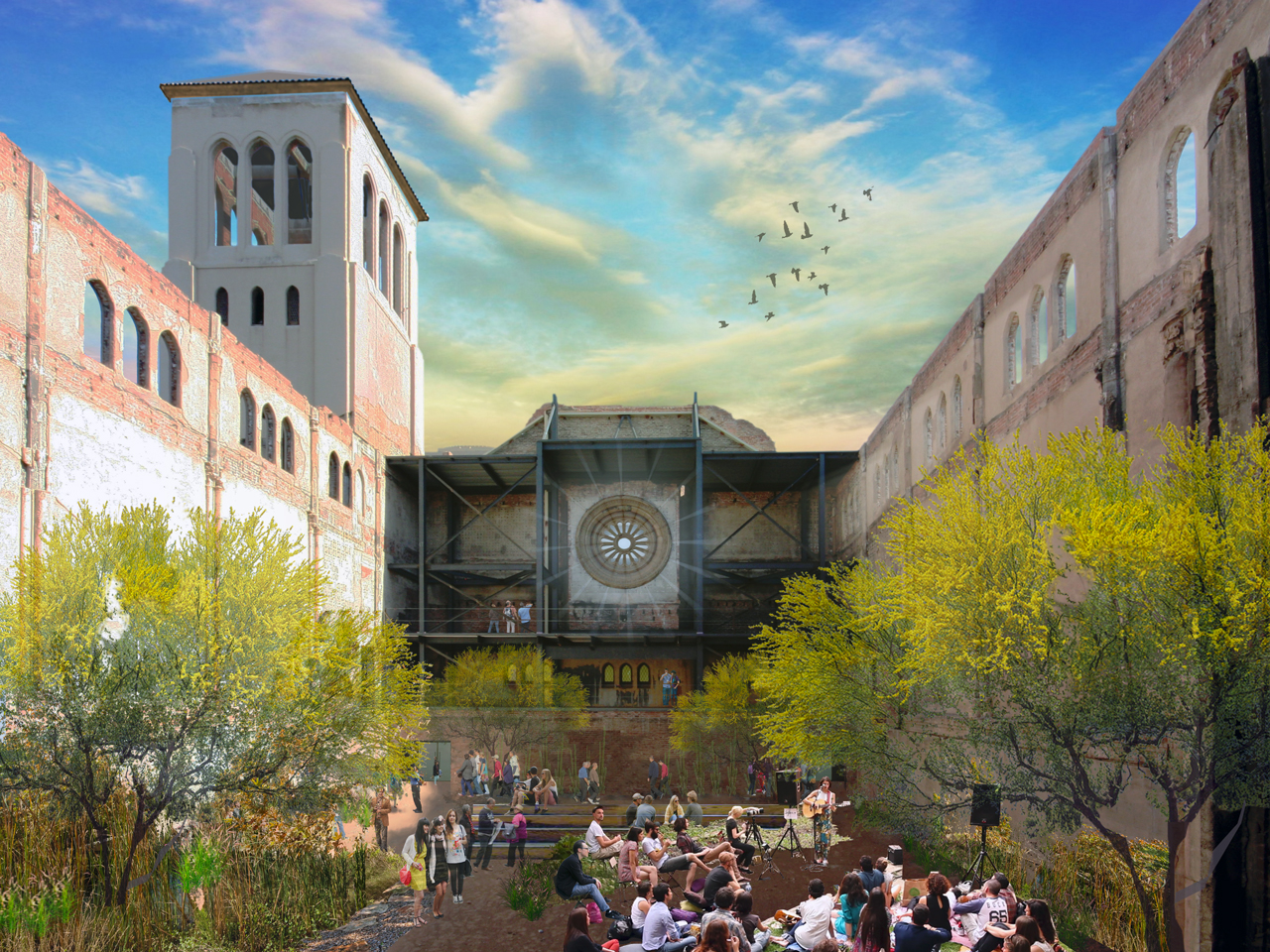 The Monroe Street Abbey contains more than just memories. It has captured the collective imagination of the community.
“It’s amazing that so many people are anxious for this place to get going — and so am I!” said Katherine Patry, a board member with the Housing Opportunity Center, which owns the building.
Getting it to this point in the redevelopment process took 25 years, a lot of funding and a lot of hard work. But the dream of creating a community-centric mixed-use space is finally in sight.
So far, three tenants “are definites,” according to Patry. A restaurant will go in the first-floor east side, a speakeasy-type bar in the basement, and another restaurant on the third-floor bell tower and balcony. Formal tenant announcements should be coming soon, and there are lots of other prospective businesses including a dance studio, coffee bar, co-working space, an art gallery and other eateries.
“What excites me is the fact that these walls could be productively engaged in community activities again,” said Terry Goddard, when asked about the project in 2015. “That we could have performances in this space, that it could be used for the community and for the arts – that has always been the dream.”
A former Phoenix mayor, avid preservationist and longtime political activist, Goddard founded the Housing Opportunity Center, which bought the building and saved it from demolition in 1992.
Two years ago, a series of heavy-duty reinforcements stabilized the long-vacant structure, representing the first major progress in decades. Since then, Patry and Goddard have been working with local real estate professionals to get the 40,000-square-foot space leased up, and there’s been no shortage of interest.

To help realize the dream, the Housing Opportunity Center teamed up with local architecture company Jones Studio and Kitchell construction to transform the abandoned building into a revenue-generating, commercial space.
On “First Friday,” Oct. 6, the public will get a sneak peek into what the designers have dreamed up. Local First Arizona For(u)m is hosting “Imagining the Abbey” — an event highlighting the work of Jones Studio and Kitchell, featuring dance performances, multimedia projections, food and drinks.
“Establishing a sense of place is central to the Local First mission and especially the For(u)m program,” said Connor Descheemaker, a community planning coordinator with Local First Arizona. “This is the kind of the unique thinking, vision, and better way of building cities we need: respecting the past while looking forward into the future.”
Built in 1929 for the Phoenix First Baptist Church, it’s listed on the National Register of Historic Places and known for its Gothic architecture, grand columns and signature rose window. After the church congregation relocated in 1968, the building eventually fell into disrepair.
In 1984, a massive fire destroyed the roof, forming a “courtyard” in the church’s center, which remains part of the final design — along with trees, landscaping, and a grand staircase between the second and third floor balconies. But the crowning design achievement will be an extension over the courtyard on the fourth floor — a sort of “glass box,” according to Patry.
“It’s stunningly beautiful,” she said. “I call it the diamond in the sky.”
The unveiling of the Monroe Street Abbey vision on Oct. 6 is timed in line with the American Institute of Architects (AIA) Arizona Conference. Capitalizing on the attention of the local architecture community, the event celebrates the adaptive reuse of the Monroe Street Abbey, while also paying tribute to the local partnerships that helped make it happen.
Four artist-led installations and performances will happen around the building, including a projection on the bell tower. The interior of the building won’t be open to the public, but State 48 Brewery will be offering samples and tours of its new space in the neighboring Welnick Arcade Marketplace, which is also a major adaptive reuse project.
Located on the corner of Monroe Street and Third Avenue in Downtown Phoenix, “Imagining the Abbey” is a free event and open to the public from 6-9 p.m. Click here to RSVP.