The Story Behind the Nevercrew Bear Mural in Downtown Phoenix (VIDEO) 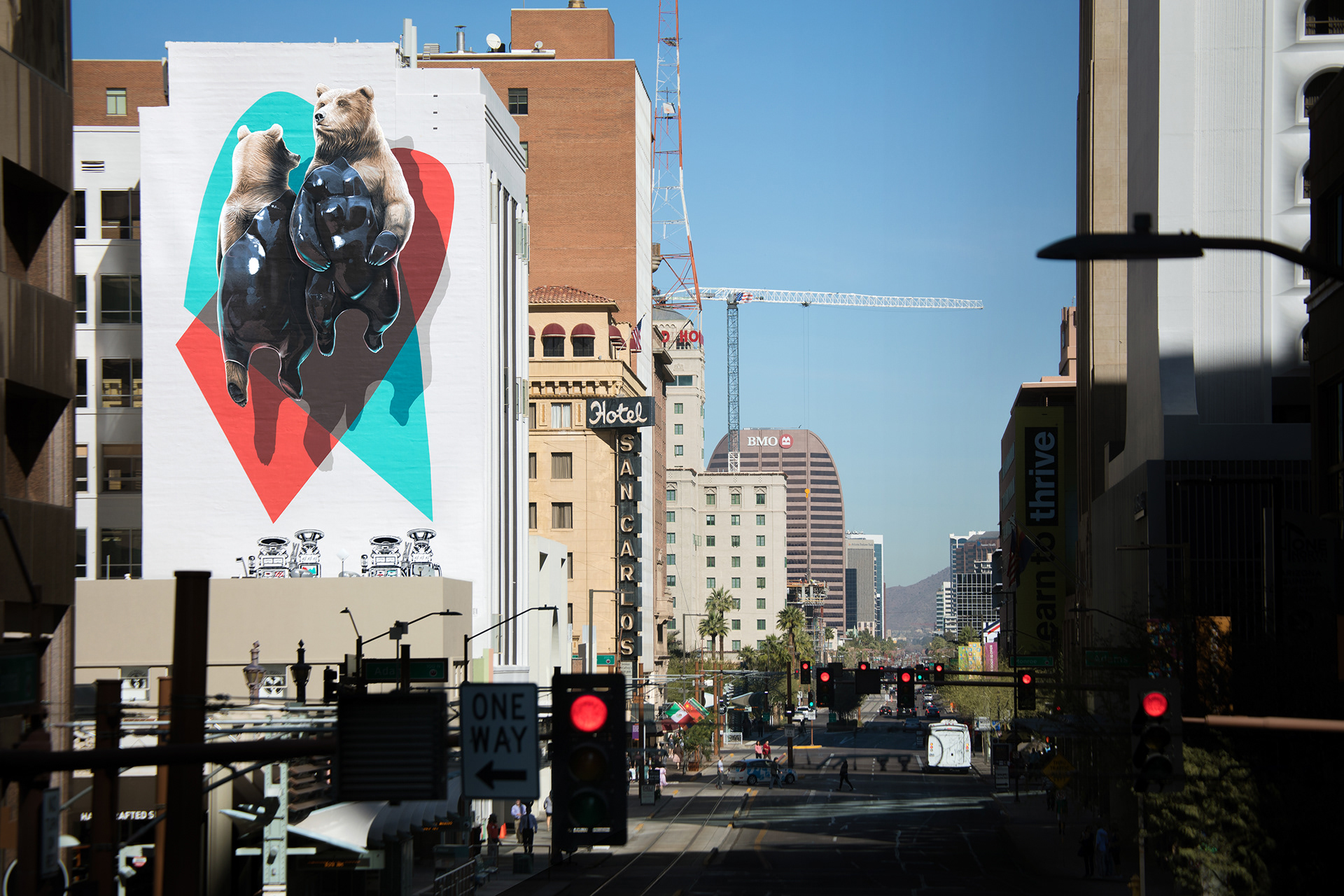 With it’s bright turquoise and coral accents, lifelike bears, and small robots at the bottom, the 75-foot surrealist mural on the south side of the Heard Building — “El Oso Plateado and the Machine” — catches the eye like nothing else in Downtown Phoenix.

Over the course of ten days in February, Christian Rebecchi and Pablo Togni — two Swiss street artists known as Nevercrew — transformed the walls of the the Heard Building, a historic mid-rise on Central Avenue between Adams and Monroe streets. The bears represent one-third of a three part series, with other pieces in the lobby and north-side alley.

“This was the main part from where we started to build our idea,” said Christian Rebecchi, one-half of Nevercrew. “Communication can be put into a visible shape in a way for other people to get the message. And in another way to remember the past, to understand the past, and to understand also ourselves as humans.”

The largest mural depicts the Mexican Grizzly, also known as “oso plateado” — the “silver bear” in Spanish, which is where the mural series gets its name. Before becoming extinct in the 1960s due to hunting, this type of grizzly inhabited the mountainous pine forests of Arizona, New Mexico, Texas and northern Mexico.

As the most prominent subject within the series, this image serves as a reminder of our history, things that no longer exist in the here-and-now, but are still present in our collective consciousness and culture, and can therefore inform the future.

Hints of the future can be found in some of the elements like the robots, which appear to be emitting a sort of holographic field around the bears, the metallic glaze over part of the bears’ bodies, giving them a bionic quality, and the way many of the objects seem to defy gravity.

Using figurative images from the natural world juxtaposed with machinery or technology creates a surrealist, almost dreamlike quality, which is a common theme in other Nevercrew works around the world. This marks only the second mural project in the United States for the duo, with the first in southern California.

Working together for 22 years, Nevercrew met as teenagers growing up in Ticino, the Italian-speaking region of southern Switzerland. They got their start in the hip hop and graffiti scenes of the late ‘90s, and were formally trained at Brera Fine Arts Academy, a prestigious university in Milan. Since 1996, they’ve completed dozens of small and large-scale murals in the UK, Switzerland, Russia, Italy, Egypt, Germany and numerous other countries around the world.

“El Oso Plateado and the Machine” was commissioned by Eric Schultz of Montana Avenue Capital Partners, which owns the Heard Building (and is in midst of remodeling the interior), and curated by Anne-Laure Lemaitre of FatCap, an agency that specializes in business and art matchmaking.