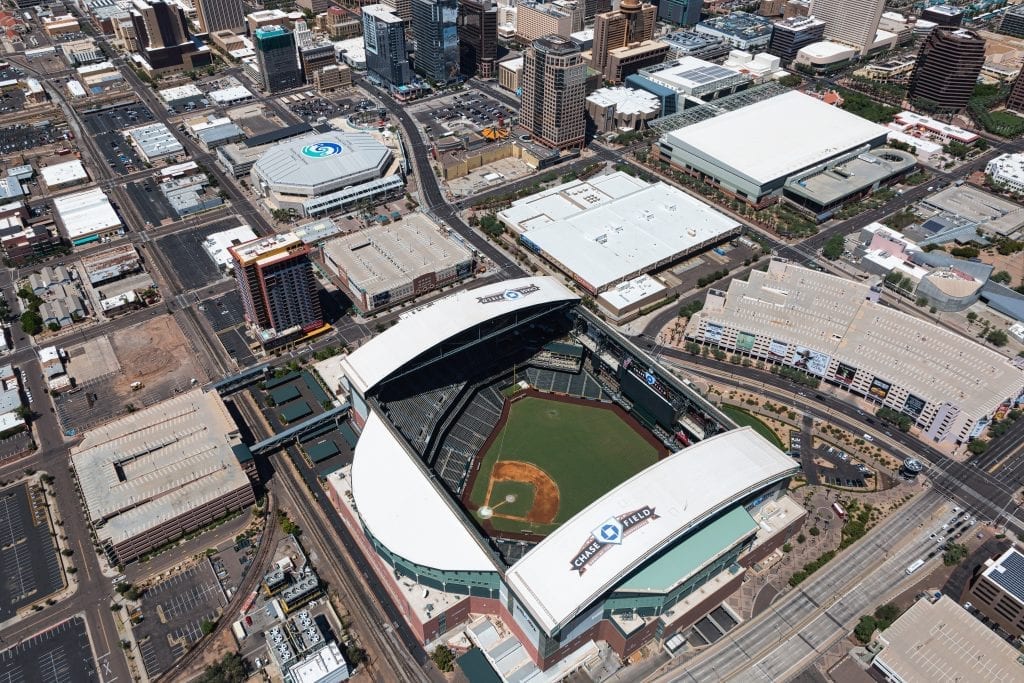 Take a moment to think about what Downtown Phoenix was like 20 years ago — when many Arizonans only came to downtown for a court appearance or Phoenix Suns game. Now picture the heart of Phoenix 10 years ago — when the light rail was just completed, and the first phase of CityScape Phoenix was still in development.

Even if you haven’t been familiar with downtown for very long, you likely know how dramatic the changes have been in the past two decades. More than 7,700 housing units were built since 2000 and there are another 2,493 housing units under construction. Downtown has more than 12,000 students and the area will boast more than 4,000 hotel rooms by 2020 — which are greatly needed with six million people visiting downtown each year.

Some argue that the light rail gave rise to the city’s resurgence over the past decade, but it is also true that having at least 81 Diamondbacks games each season at Chase Field created significant demand for the light rail in the first place, according to Dennis Hoffman, Director of the L. William Seidman Research Institute at the W. P. Carey School of Business at Arizona State University.

“Having the Arizona Diamondbacks and Chase Field stadium downtown is one of the original catalysts to Downtown Phoenix’s development and has given Phoenix a national platform over the years that has been invaluable to the city’s growth,” Hoffman said.

A 2017 study by the Seidman Research Institute found that the Diamondbacks have brought in over 60,000 jobs, about $4 billion in labor income, and nearly $5 billion in Gross State Product since 1996.

“The numbers reported by the Seidman Institute are significant, as is the financial return generated by the team to the city, county and state,” Hoffman said. “But the way that the Diamondbacks changed the growth trajectory of Downtown Phoenix may be one of their most important contributions.”

Devney Preuss, President and CEO of Downtown Phoenix Inc., began working for the Phoenix Suns and Mercury in 2004, when there were still limited restaurant options in the area, and the only late lunch options were the concessions at the stadium later in the day.

There are now 208 bars and restaurants within a 1.7-square-mile-area, and Preuss said she’s watched Downtown Phoenix grow into a 24-7 hub for food, fun and entertainment.

“Restaurants, bars and live music venues are now open every night of the week, and they directly benefit from the game and concert attendees that the sports arenas draw into downtown,” Preuss said. “This has been especially vital in the summer, when Downtown Phoenix businesses rely heavily on crowds from Chase Field and other events.”

Sporting events drew 3 million people to downtown in 2019 — and as more people over the years were drawn to downtown, so were restaurants and other businesses.

Eric Stoltz has been a restaurant owner in Downtown Phoenix for more than 20 years, and said he chose the area near Chase Field because of the success he saw in Downtown Denver’s entertainment district. For a while, Diamondbacks and Phoenix Suns fans were the main crowd for restaurants around the stadium, but now the Phoenix Convention Center and lunch crowds help local businesses thrive, according to Stoltz, who currently owns Willie’s Taco Joint.

Downtown Phoenix has doubled its number of restaurants in the past decade. And the restaurants and fun things to do brought a surge of people that want to live and work in downtown.

“Much like the Phoenix Convention Center and Talking Stick Resort Arena, the stadium provides entertainment to thousands of people each year, making these venues invaluable to attracting office tenants, retailers, restaurants and residents to CityScape and Block 23,” Jeff Moloznik, Vice President of Development at RED Development, said.

According to Moloznik, that project wouldn’t be possible without specific economic catalysts like Chase Field, which really helped get things moving.

An AZ team that’s part of the community

In addition to impacting downtown’s economy, the team continues to make its mark on the social and cultural fabric of the community.

The Arizona Diamondbacks Foundation started in 1997, working with countless community organizations and individuals over the years. From building baseball fields to charitable grants, the foundation has contributed more than $60 million to the state in two decades.

These contributions are made to organizations big and small, and put the team amongst the most philanthropic of Major League Baseball’s 30 franchises year after year. Diamondbacks players and legends make community visits nearly every home game, and several of them live in Arizona year-round.

Arizona Diamondbacks President and CEO, Derrick Hall, is a cancer survivor who advocates for organizations like The Joy Bus — a nonprofit that provides fresh meals to home-bound cancer patients.

The Joy Bus’ Annual Gala, its largest fundraising event of the year, was sponsored by the Diamondbacks earlier this month. Their contributions and support keeps organizations like Joy Bus running, according to Joy Bus Founder Jennifer Caraway.

“We are a small nonprofit, struggling to exist and his support means more to our humble operation then he will know,” Caraway said. “He is the true meaning of community and the world would be a better place with more Derrick Halls.”

Branching out beyond baseball

The Diamondbacks now control the management of Chase Field, which means they can host events outside of the baseball sphere. The stadium was recently used for convention gatherings of more than 40,000 people, a drone racing event and beer crawls.

TopGolf Live will make a splash at Chase Field from Dec. 12 through 15, with 23 private bays where participants can try the tech-savvy golf game. Chase Field will also host the Cheez-It Bowl on Dec. 27. These additional community events draw thousands of people to downtown, and help activate Chase Field beyond the baseball season.