The streets of Downtown Phoenix are like an art museum. Throughout the year it’s not uncommon to find artists using its walls as canvases for murals. And even though murals have become known as popular backdrops for photos, they’re really so much more. They tell stories of the past, comment on social issues, and more importantly — inspire us to explore our city.

So next time you’re getting some fresh air downtown, take a little detour to check out some of these murals: 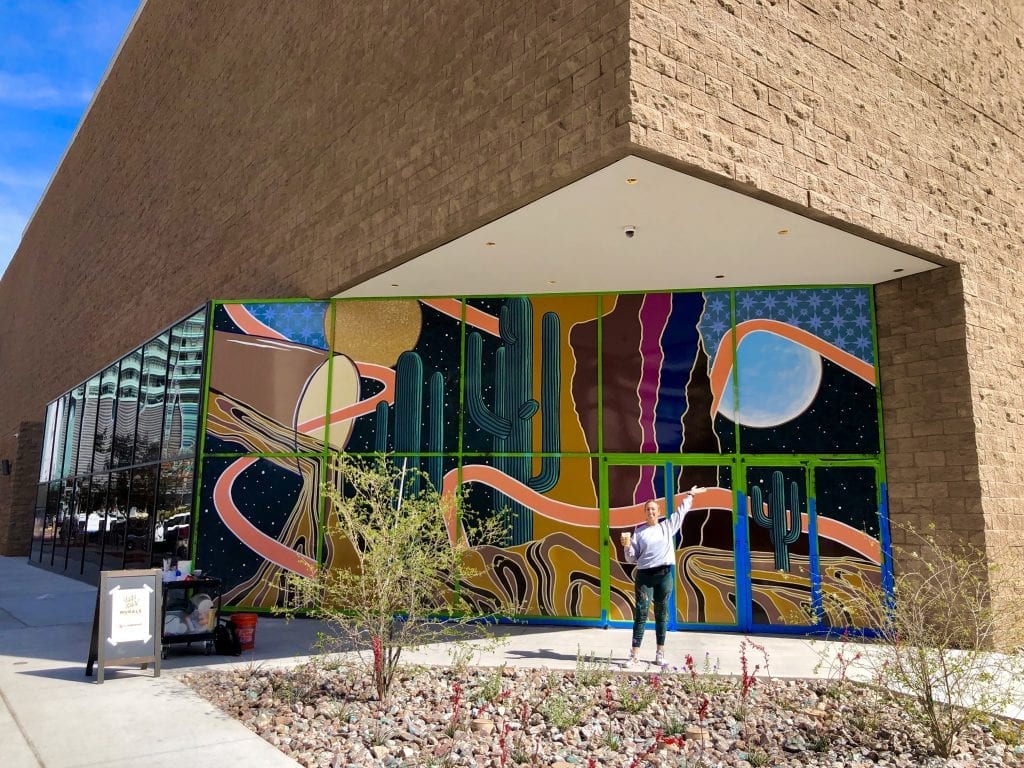 Local artist Jane Goat recently completed a mural on the west wall of the Hyatt Regency hotel. In her signature graphic style, Jane brings an dreamlike depiction of the Sonoran desert to the heart of Downtown Phoenix. 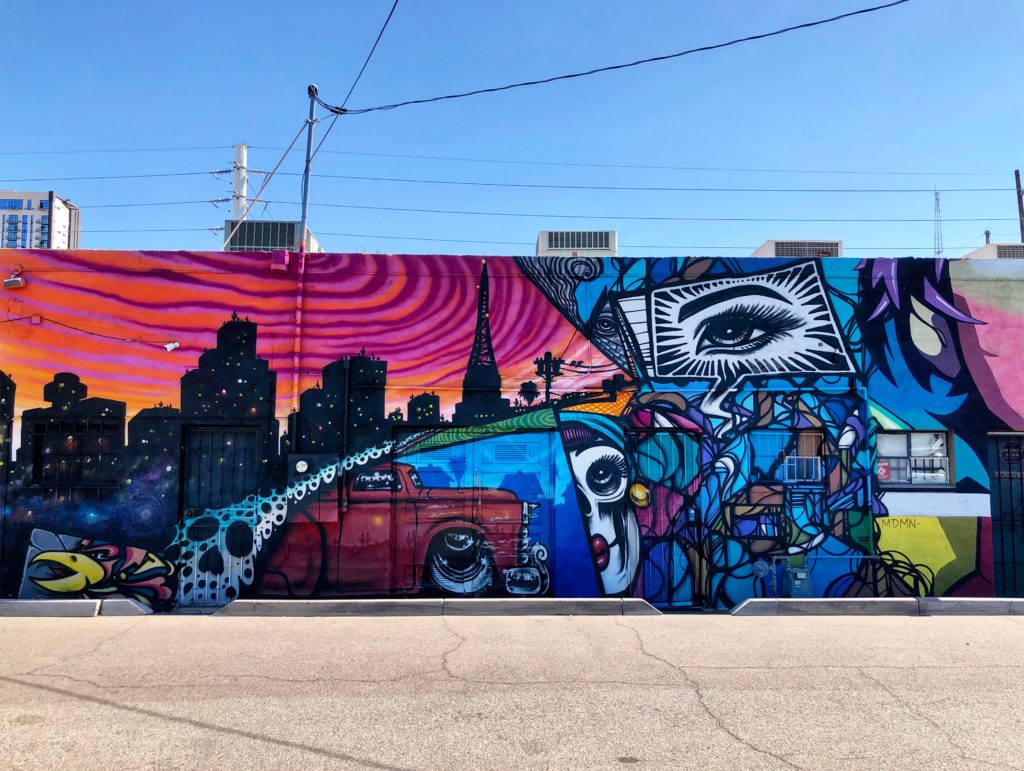 It might be smack dab in the heart of Roosevelt Row, but this mural is easily missed. Located on the north-facing wall of Carly’s Bistro, it’s a collaboration between several local artists including Lalo Cota, JB Snyder, Angel Diaz, Pablo Luna and MDMN. 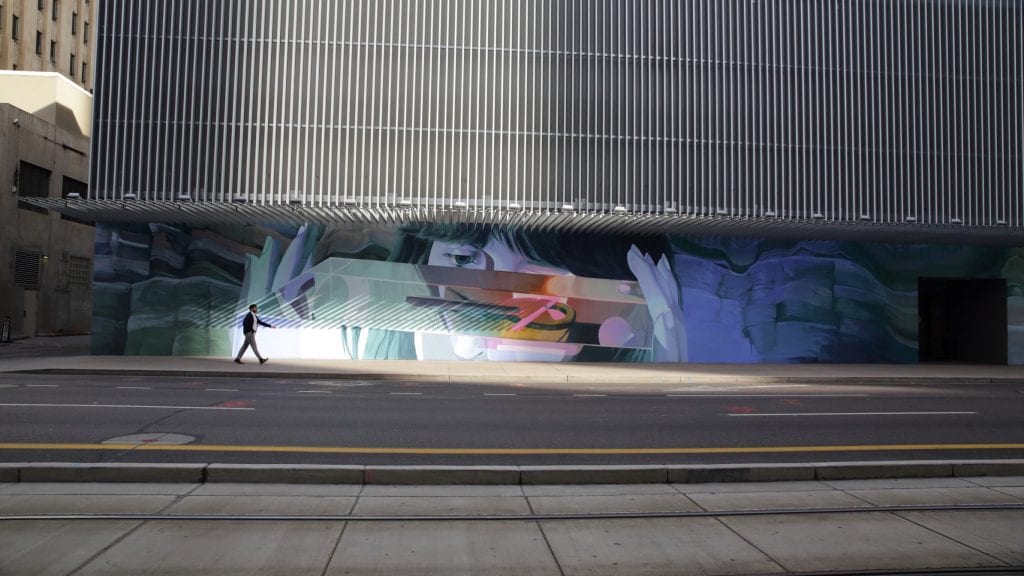 If you’ve passed by the the Renaissance Phoenix Downtown Hotel on Central Avenue, then you’ve probably noticed the captivating 144-foot mural titled “Timeless” completed in fall 2019 by graffiti artist Clyde. Each hour of the day, the mural changes as shadows are cast from the overhanging shade structure while the sun moves across the sky.

What does the key in the crystal mean? Here’s a note from the artist with a little insight:

“The narrative of the mural is a girl who has discovered a glass prism containing a key while wandering through a canyon. On the key is a serial number, which are actually 3 engraved dates. which represent each year the hotel was rebuilt (twice due to fires and once from a demolition and rebuild). At the very end of the mural after following along the canyon wall, the City of Phoenix skyline appears in the distance, begging the question “Where will the key take the girl and what doors will it open up for her?” — Follow @clyde_graffitiart 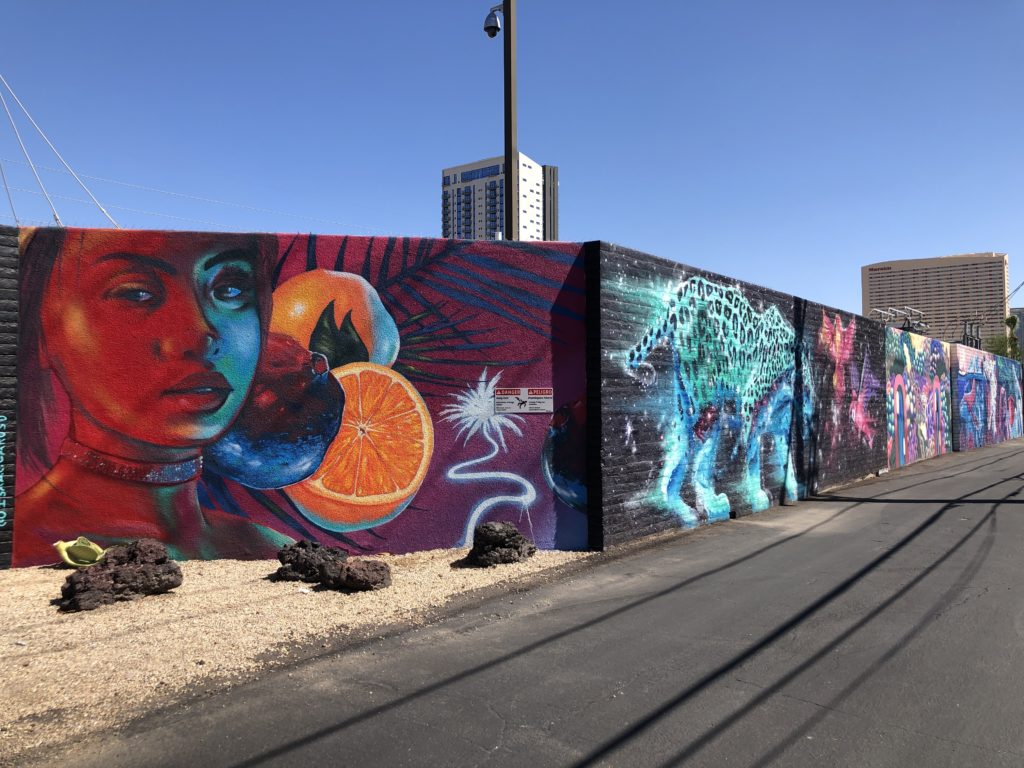 1 1/2 Street mural features works by 12 local artists in the alley behind The Churchill. (Photo: Lauren Potter)

Three partners came together to bring this project to life: The Churchill, Phoenix Center for the Arts and Arizona Public Service. 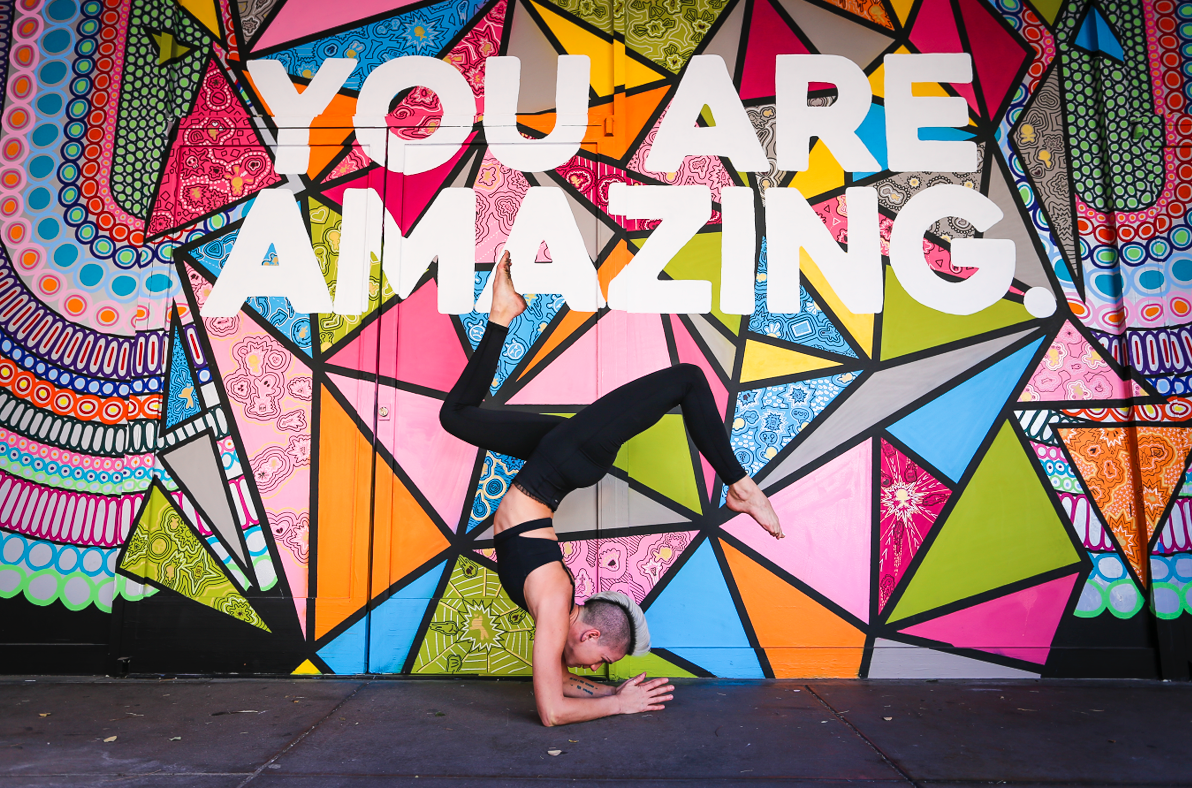 Nothing will brighten your day like the colors and message behind this lively mural by Kyllan Maney and Jayarr. The collaborative piece can be found opposite Phoenix Symphony Hall on the southwest corner of Second and Adams streets. 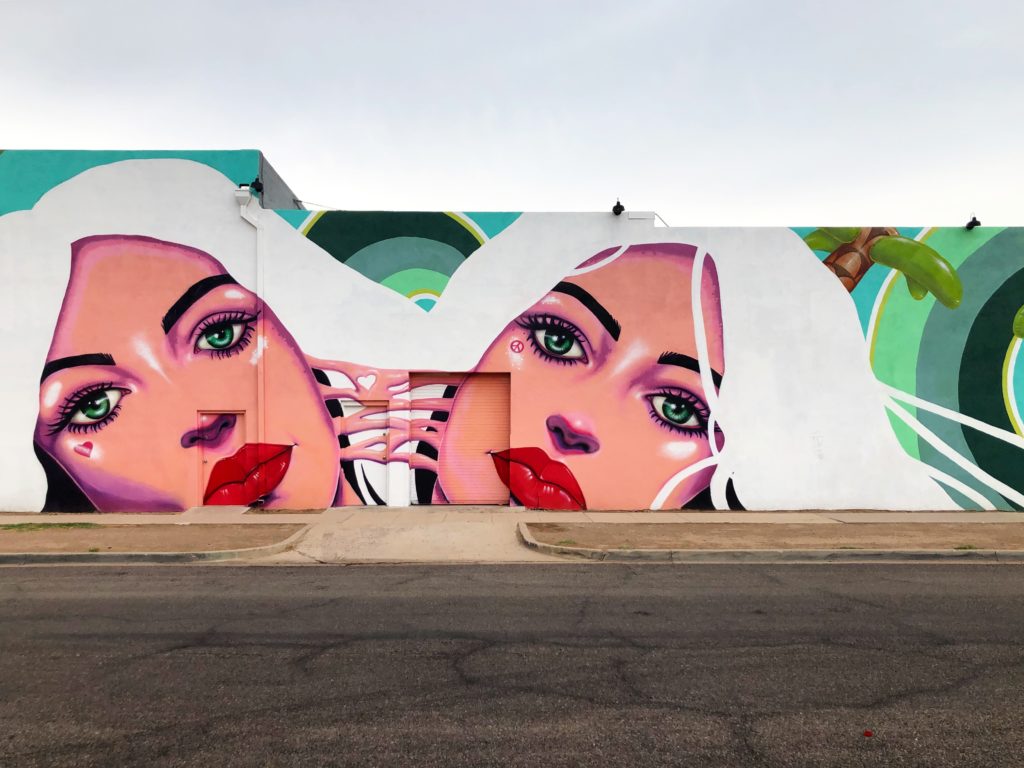 The striking colors and contrasts of this mural instantly draw you in. And at 125-feet long, you’d think this one would be impossible to miss, but it’s in an unlikely location on Eighth Ave. south of Washington —  a couple blocks west of the Supreme Court building. Nyla Lee and Isaac Caruso created this mural together, a piece which speaks to self-image and social norms. 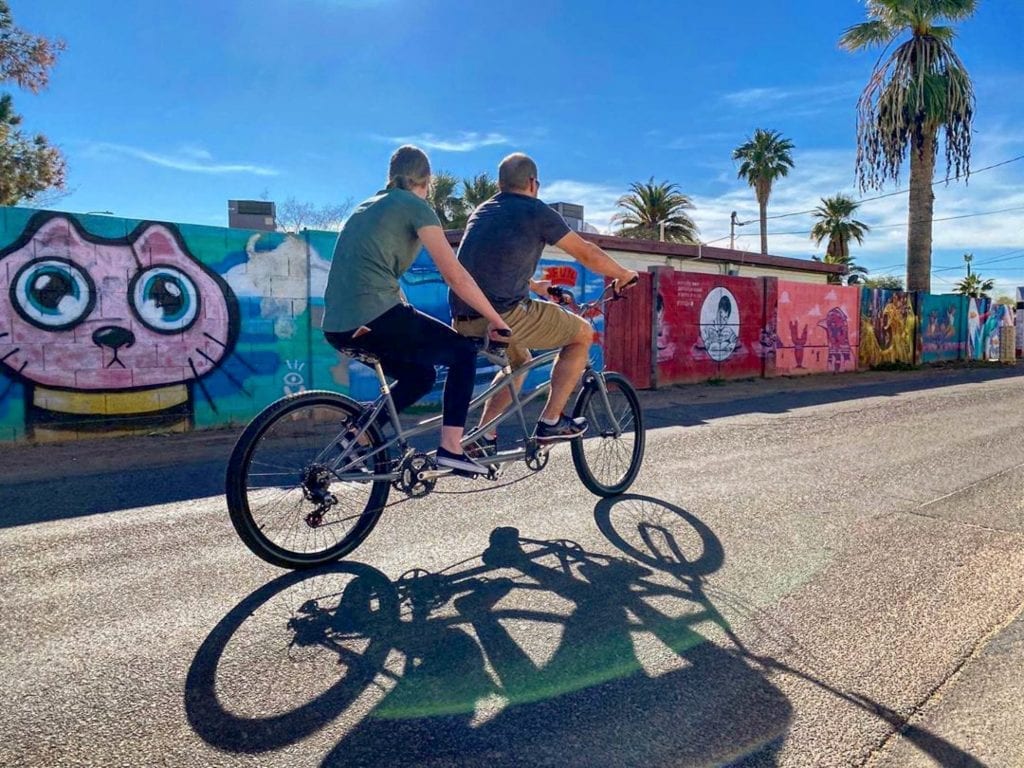 Northwest of Downtown Phoenix in the cozy Coronado neighborhood lies a quiet little stretch that’s part street, part alley, and it’s covered in dozens of colorful murals by local artists. Hop on a bike to explore the Oak Street Alley murals, which are nestled between 14th and 15th streets on Oak. 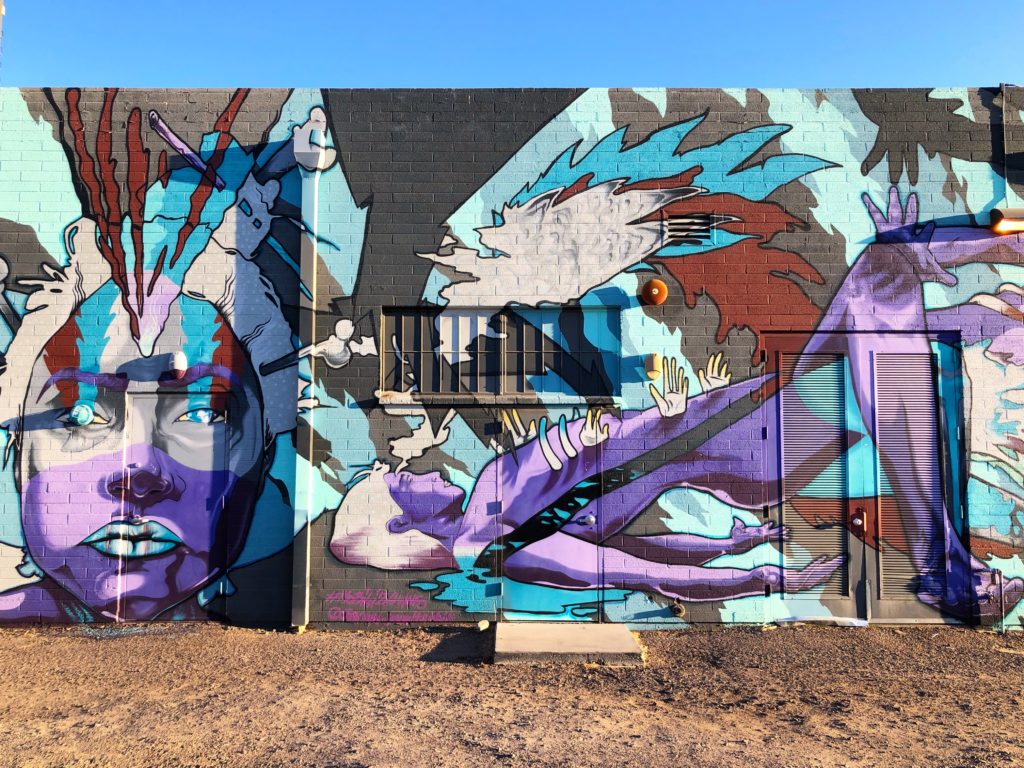 FilmBar may be known for its indie films and good beer, but it’s also home to a striking mural. Wrapping from the east side of the building around the length of it’s north-facing wall, this mural titled ‘Dissolving Demarcation’ by Joerael Elliot explores the boundaries we place on ourselves and others. 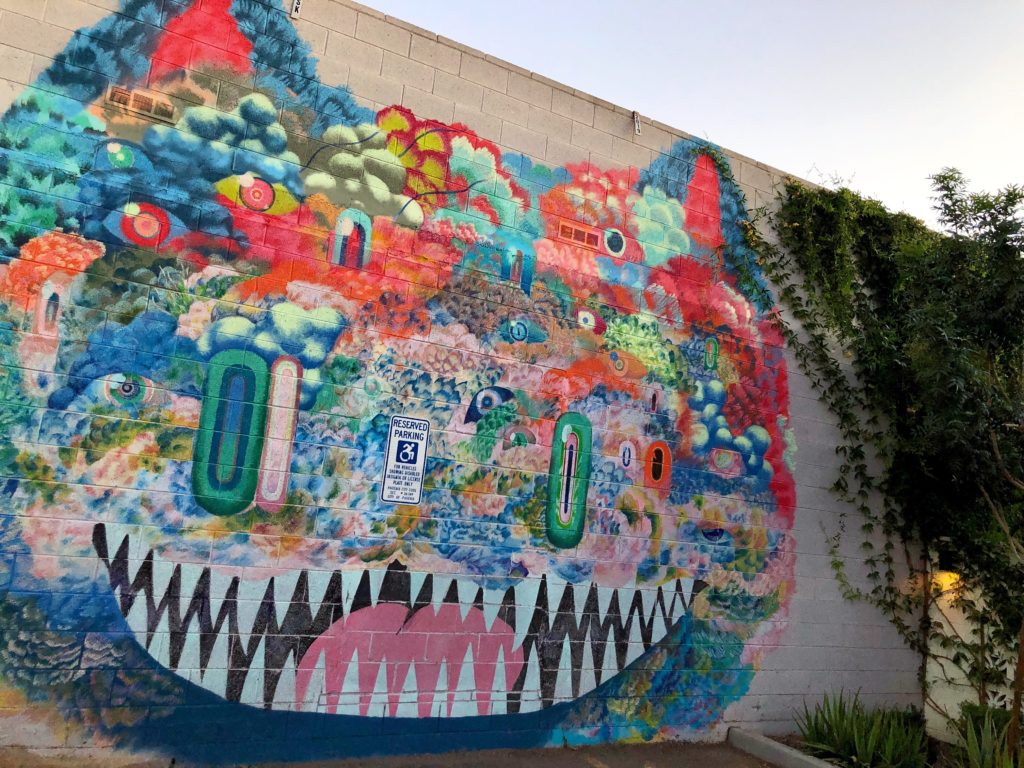 Even parking lots in Downtown Phoenix can be places to find cool art. Josh Brizuela painted this mural behind Gracie’s Tax Bar in his signature surrealistic style. At first, only the wide, fang-filled smile of the Cheshire stands out. But then it draws you in to examine the detail, then you see its eyes (there are many if you look closely). 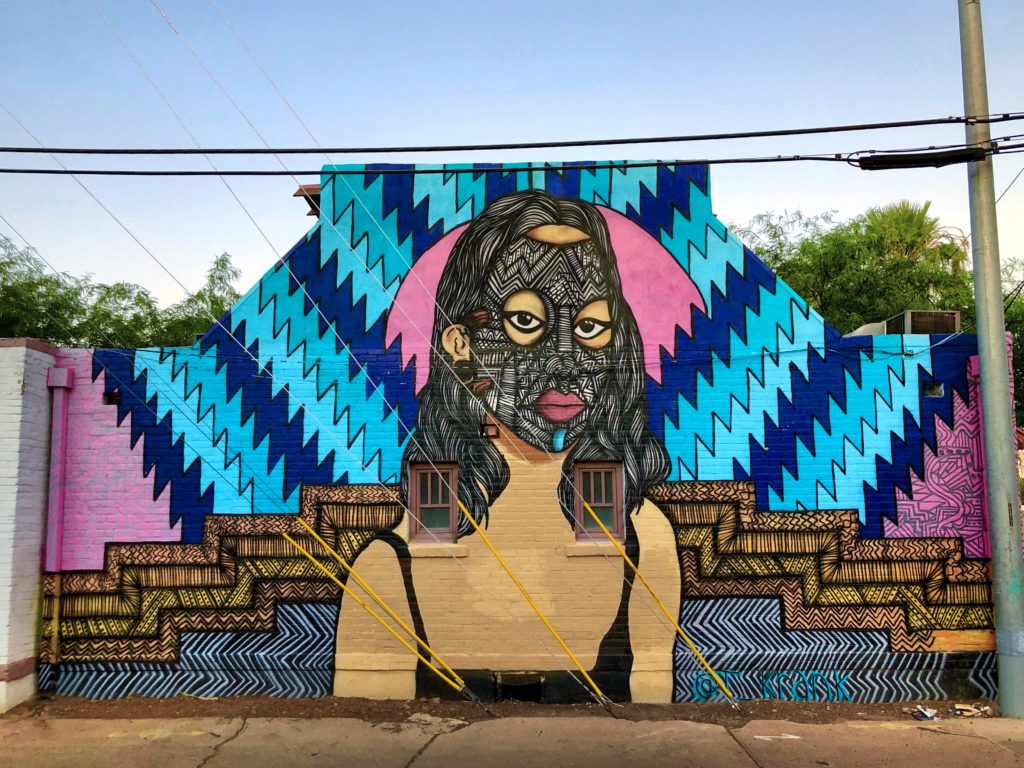 Tucked away in an alley, the vibrant colors and contrasting pattern of this mural by Tyson Krank will catch your eye as you head west on Fillmore St. as you stroll over to Cibo for pizza. Krank has several other murals throughout downtown, but we love this one because it’s a little hidden. 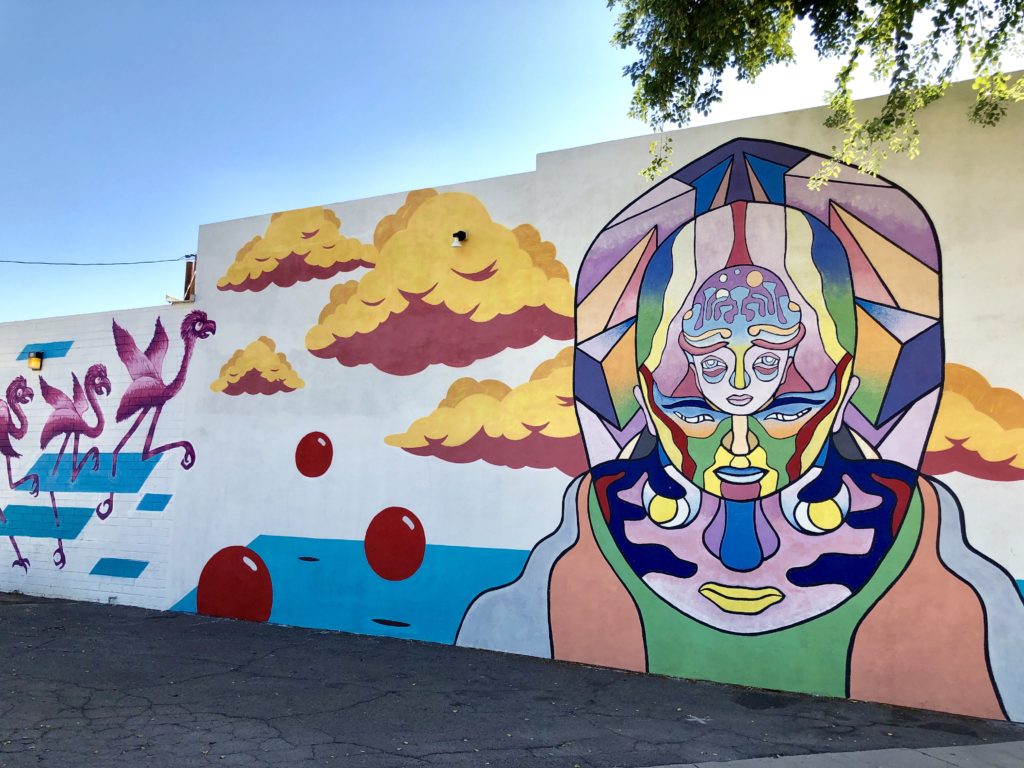 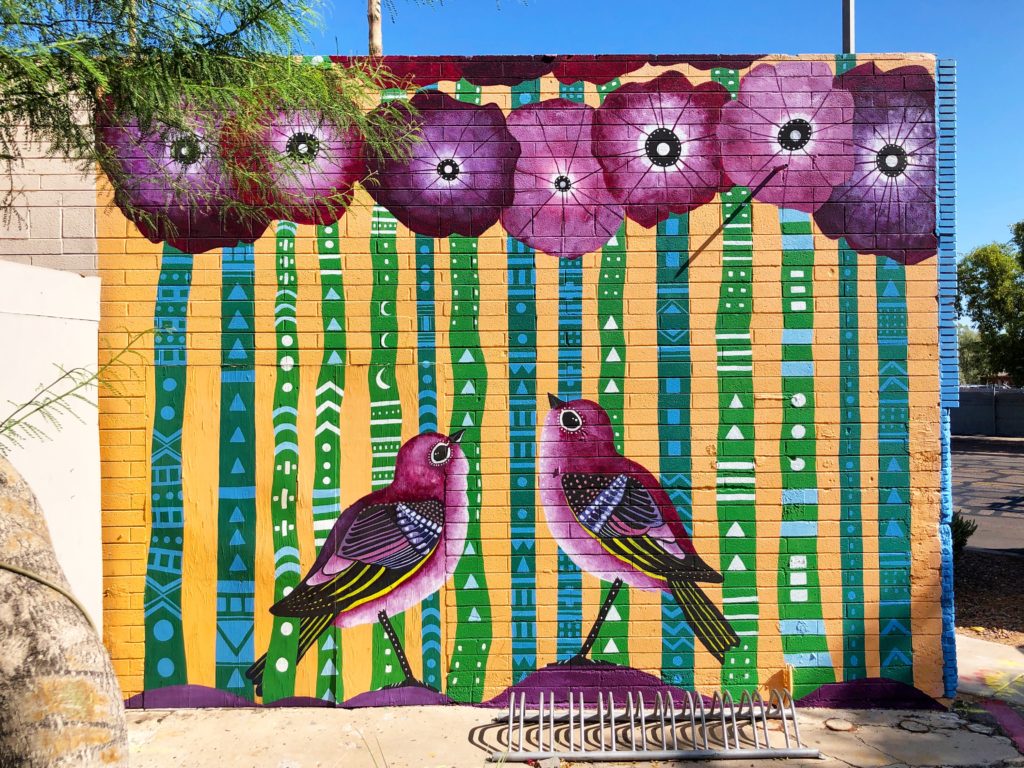 Beautiful birds and flowers in bloom form the centerpiece of this uplifting Lauren Lee mural. Just across the street from Trans Am you can find it on the exterior wall of Oasis on Grand, where she was living when she painted the mural. The residential community is also home to two gallery spaces, which feature exhibits on Artlink First Fridays. 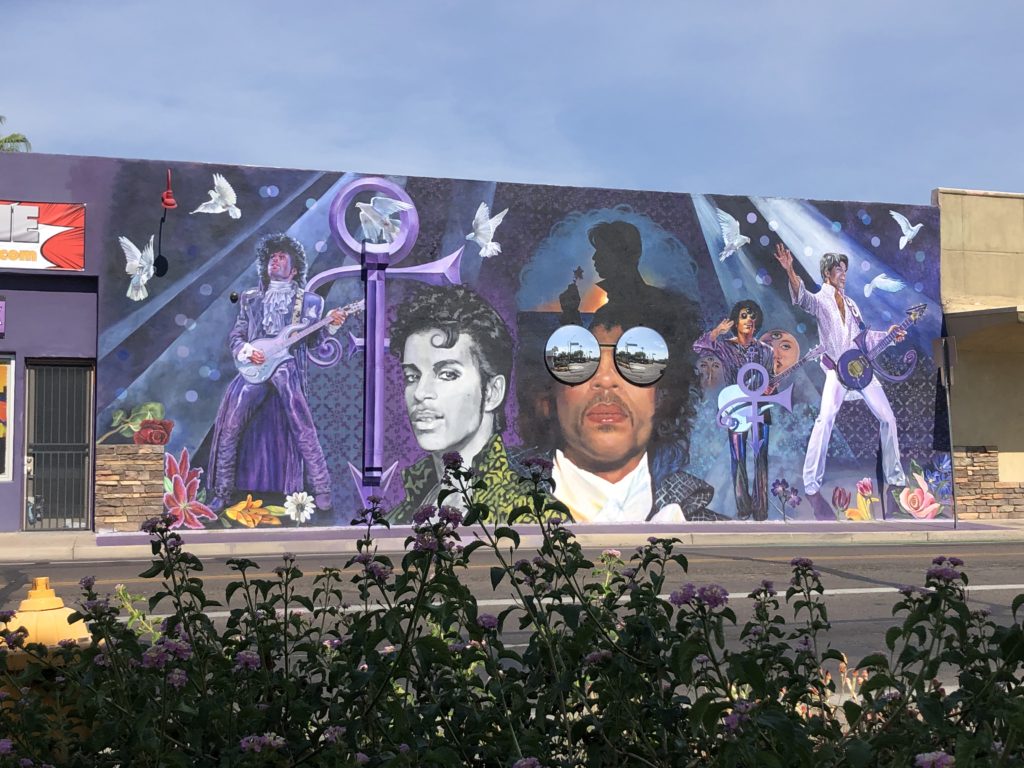 Maggie Keane is a local artist known for her murals of musical legends. In 2016 she painted a mural of David Bowie which brought fans from across the country, and now, she’s making waves with her stunning tribute the musical icon, Prince. Stop by Rodriguez Boxing Gym at 15th Ave. and Roosevelt St. to see the mural for yourself. 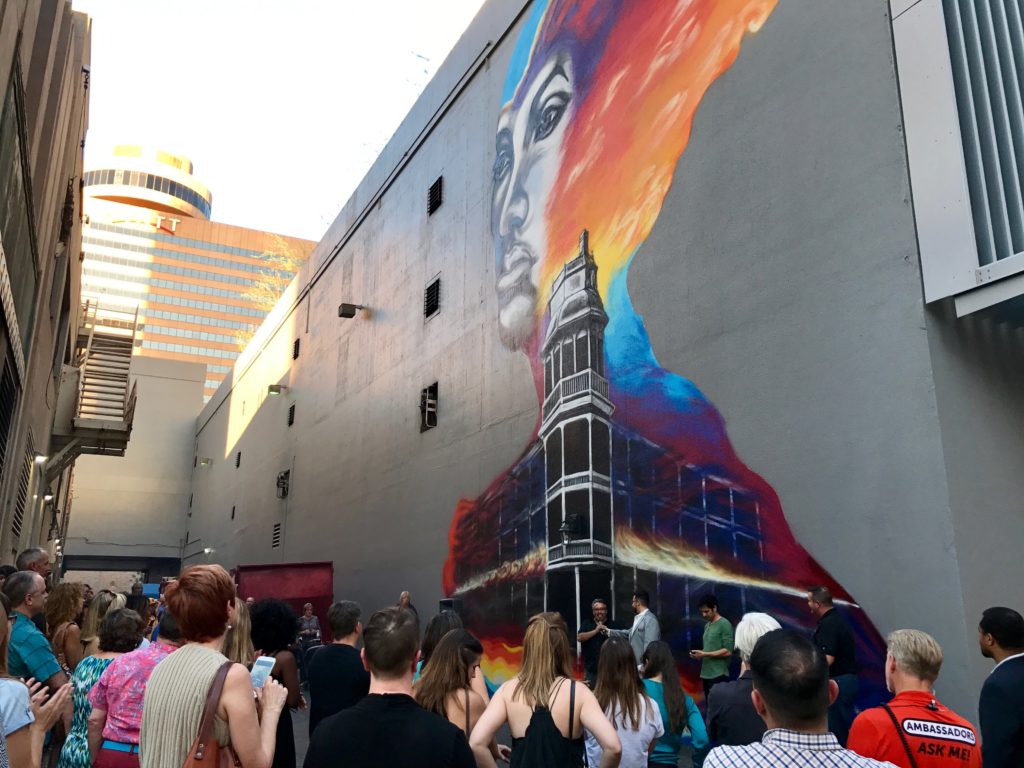 ‘Malinda’ is an ambitious mural by Hugo Medina and Darrin Armijo-Wardle that activates the alley connecting Central Ave. to First St. north of the Renaissance Hotel. The mural pays homage to the hotel’s legacy and the rich life of a colorful historic character, Malinda Curtis, whose spirit is said to inhabit the alley to this day. The mural is one of many arts initiatives by Downtown Phoenix Inc. 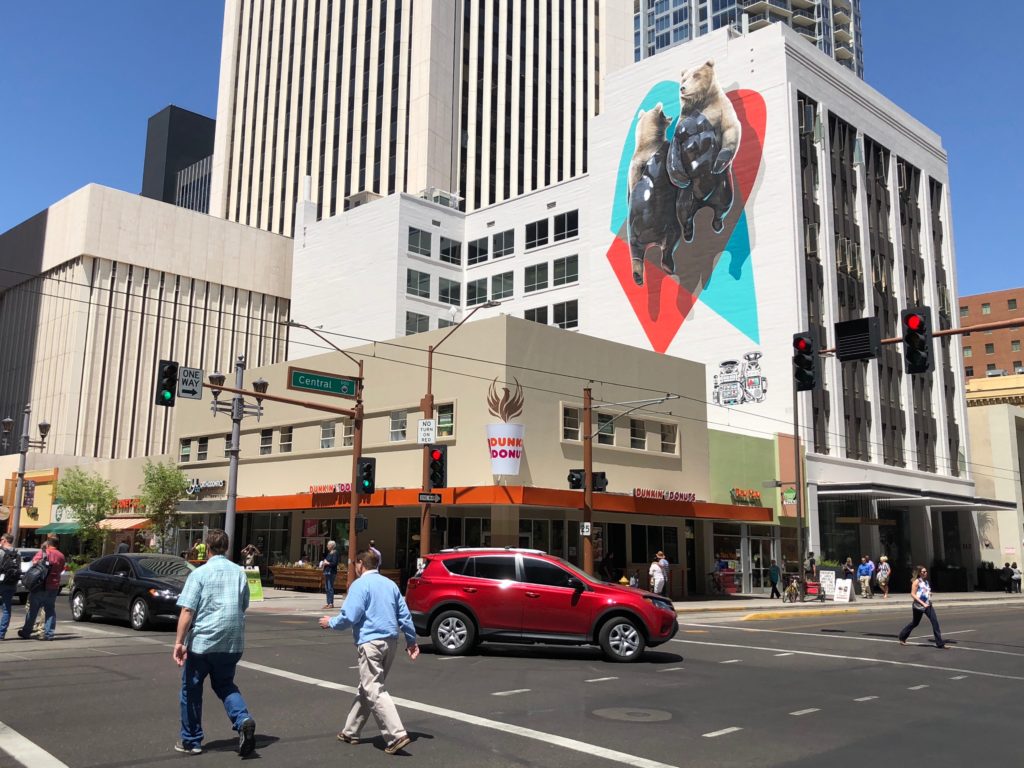 Hovering high above the intersection at Central Ave. and Adams St., ‘”El Oso Plateado and the Machine” is a mural by the Swiss artist duo Nevercrew. The main figures are Mexican grizzly bears, which are now extinct. They represent one part of the three-part mural, which speaks to the past and examines the future. Read more about the story behind the mural.