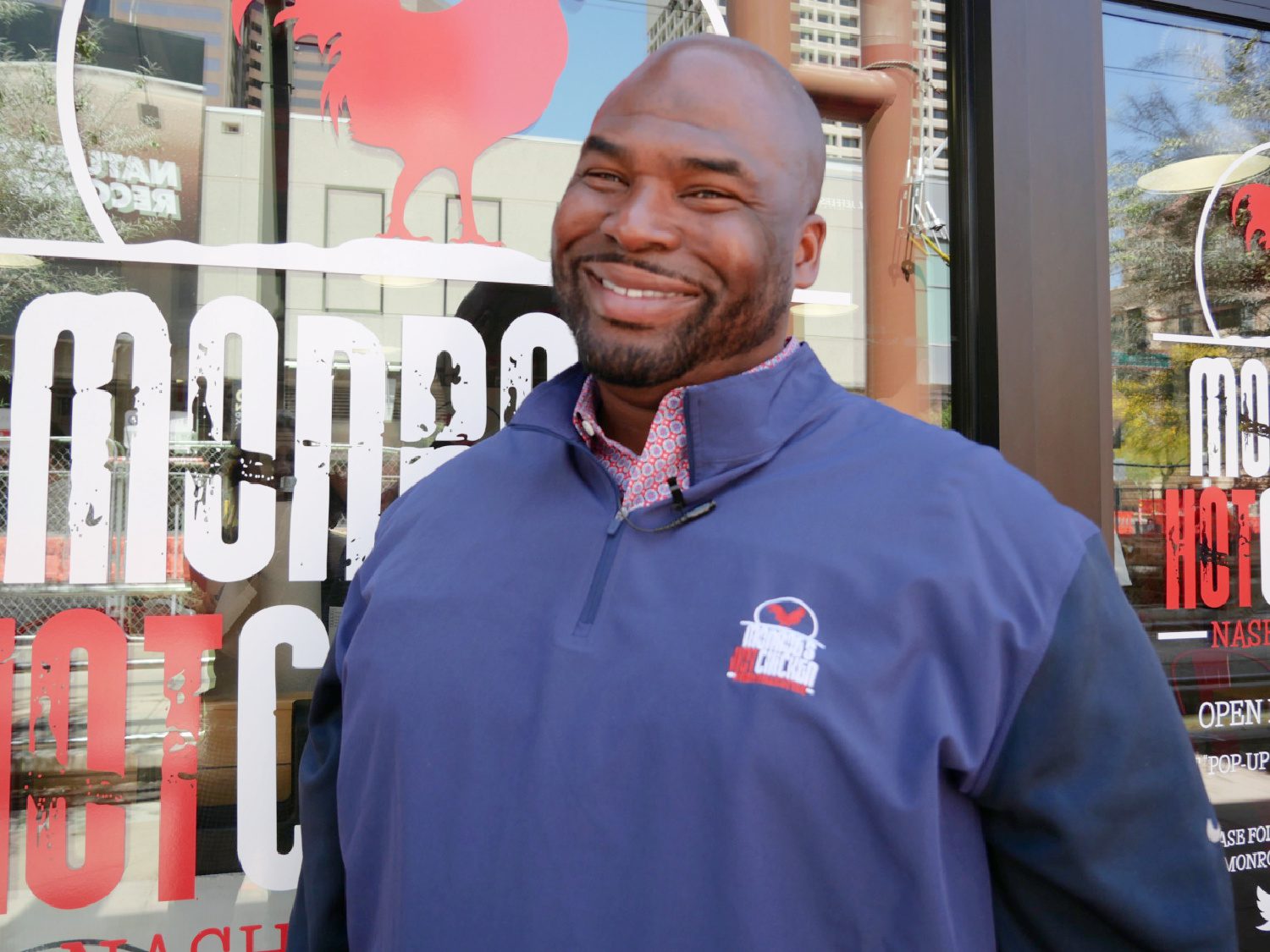 Larry White Jr. is the owner and founder of Lo-Lo’s Chicken & Waffles, Monroe’s Hot Chicken and Brunch & Sip. Pictured in front of the flagship Monroe’s Hot Chicken in Downtown Phoenix, White opened a second Monroe’s at The Watermark on the north side of Tempe Town Lake in the fall of 2020. (Photo: Fara Illich, May 2022)

Good food brings people together. That’s the motto Larry “Lo-Lo” White cooks by, and that’s the foundation beneath an ever-growing business model — one he’s been perfecting since 1997.

It’s the foundation his grandmother laid in October 1964 when she opened Mrs. White’s Golden Rule Café on Jefferson and Eighth streets, just east of Downtown Phoenix in the historic Eastlake Park neighborhood.

“Some of my favorite memories of my grandmother’s restaurant is just seeing all the dignitaries come in, you know — your governors, your mayors, your senators, Senator John McCain used to come in a lot,” said Larry White, owner and founder of Lo-Lo’s Chicken & Waffles, Monroe’s Hot Chicken and Brunch & Sip. “It has always been that destination for community leaders to get together and meet at Mrs. White’s to talk about serious subjects. You met a lot of important people at Mrs. White’s Golden Rule Café, and I love that.”

He liked hanging at his grandmother’s restaurant, and worked nearly every job there during high school, but said he never thought he’d end up in the restaurant business. In fact, it was “the last thing I wanted to do,” he said. But all those years watching his grandmother, he learned a trade — a specialized craft that only comes with consistency, hard work and a taste for delicious food.

No shortcuts on the road to success

When it came time to open his own restaurant in ‘97, which started as a weekend pop-up chicken and waffles spot out of Mrs. White’s, “it all just came so natural,” he said.

Knowing what to taste for, smell for, and look for in quality ingredients is something he’d been doing his whole life. But natural ability doesn’t mean things came easy.

In 2000, he got his first brick-and-mortar Lo-Lo’s Chicken & Waffles — a 1,000-square-foot house on Central Avenue, just south of downtown. It took two years to convert the house to a restaurant and get it up to code, and he did it all without formal business training or outside investment. 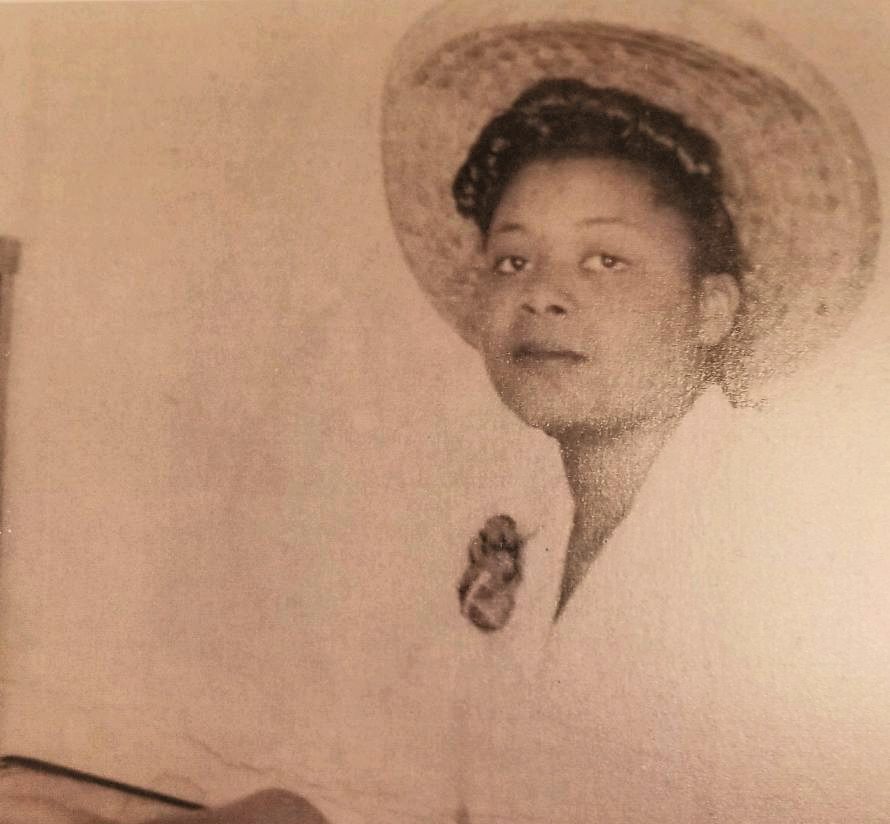 The queen of Phoenix soul food and grandmother of Larry White, Elizabeth White has been serving southern classics like catfish, smothered chicken and peach cobbler just east of downtown at Mrs. White’s Golden Rule Cafe since 1964.

Lines soon started forming around the block, attracting the likes of Charles Barkley, Shaquille O’Neal and Muhammad Ali — a gathering place for people from all walks of life, just like his grandmother’s place.

After a decade of success, he expanded to a nearly 6000-square-foot 1930s building around the corner. He also launched Lo-Lo’s as a national franchise brand in 2014, opening Lo-Lo’s in the Dallas-Fort Worth area in 2016, and Las Vegas in 2021.

Building on his grandmother’s recipes, Lo-Lo’s claim to fame was his scratch-made fried chicken and sweet, syrupy waffles. But his menu of authentic Southern comfort also includes scrumptious shrimp and grits, salmon croquettes, collard greens, fried-green tomatoes and much more. Each dish is made from scratch every day, and White prides himself on the fact that there are no microwaves in his restaurants – guaranteeing fresh-made food. 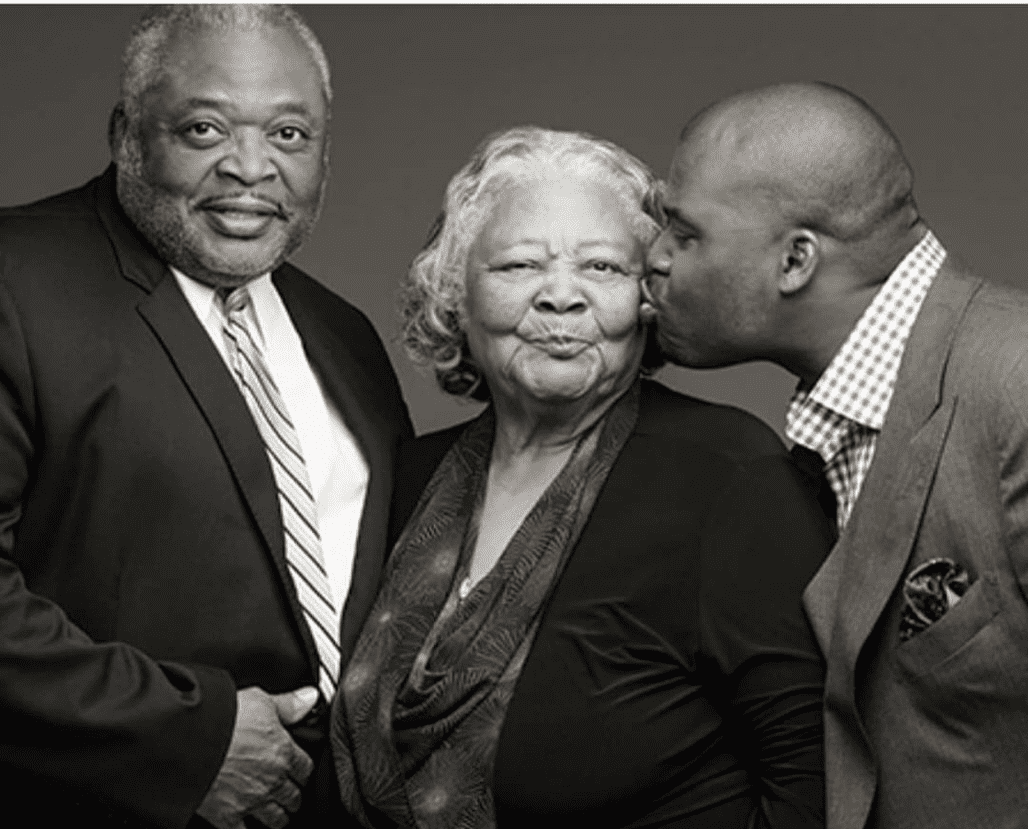 “Taste is 99 percent of how you make a recipe,” he said. “Now in grandma’s recipes, it’s a little different, because grandma was like, ‘baby, you need a pinch full of this and a fist full of that,’ and they just don’t have grandma pinches and fist-fulls at the bake shop. So I actually have a mold of my grandmother’s hand — just joking. But taste is most important.”

Smiles, jokes and lots of laughter remain a main ingredient at all of White’s restaurants, an empire that’s grown into three concepts, including the original Lo-Lo’s Chicken and Waffles, Monroe’s Hot Chicken and his latest — Brunch & Sip, co-created with wife Rasheedah White.

Early days growing up in Phoenix

He has nine stores total, with plans for future growth, but his roots will always remain closely tied to his hometown.

“Growing up in Phoenix — it was cool. It was a great place to grow up,” he said. “I’m a true Phoenician, I’ve seen a lot a lot of the city grow and develop and change over the years.”

He used to take the bus downtown, nicknamed “The Tico,” after the city’s transit mascot (a sun with a hat and sunglasses), popularized in the 1970s. 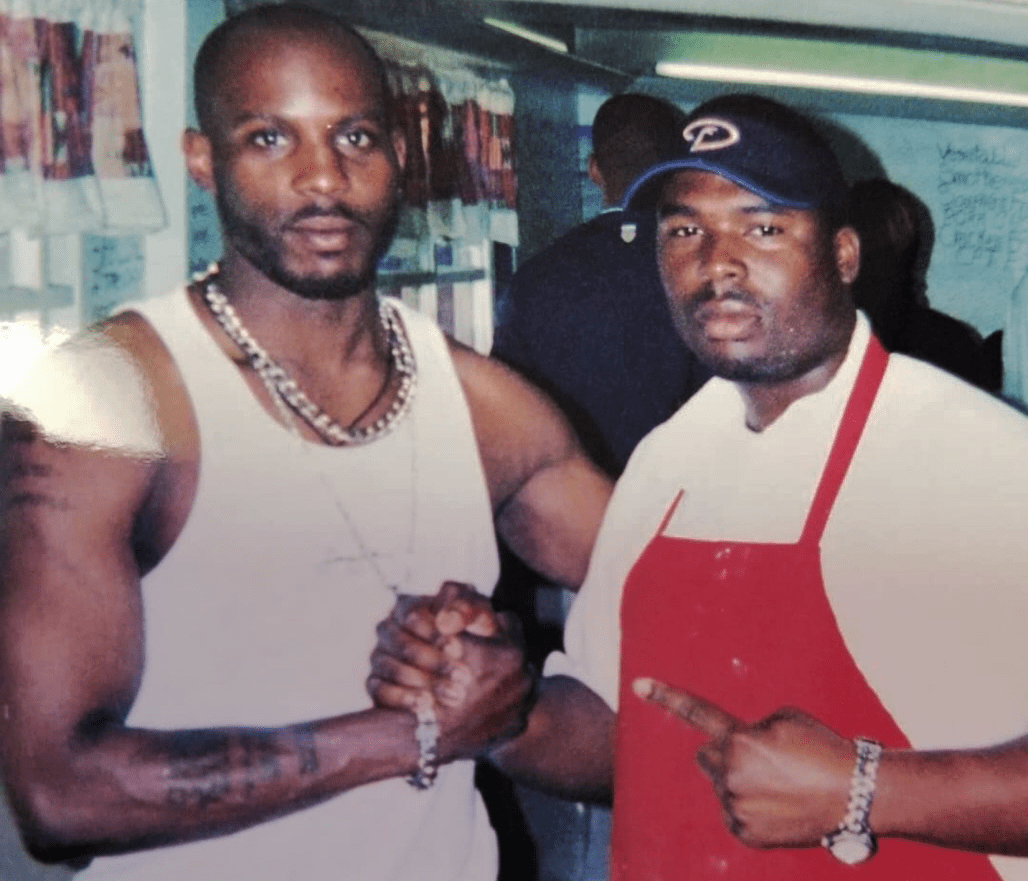 “Downtown Phoenix was my playground. So if I wasn’t playing at the restaurant (Mrs. White’s), I was playing at the Greyhound bus terminal on Washington Street. And where the Diamondbacks baseball field is, there used to be a big mound of dirt, and I used to climb that mound of dirt and play there as well.”

Born and raised in south Phoenix, White says downtown was “the place to be.” But it wasn’t until 2019 that White opened his first restaurant in the Downtown Core, Monroe’s Hot Chicken.

He saw the Nashville hot chicken craze growing in popularity on social media, and started doing his homework. He visited Howlin’ Ray’s in Los Angeles multiple times, and spent a week in Nashville visiting places like Prince’s Hot Chicken, where the recipe is said to have originated in 1945.

Bringing the first hot chicken to the Valley

In addition to extensive research and recipe development, the first location was key. Originally planned for a building on Monroe Street in Downtown Phoenix, which didn’t end up panning out, the name and concept remained, opening instead in the 1924 historic Luhrs Building.

As luck would have it, Monroe’s Hot Chicken is less than a mile east of Mrs. White’s Golden Rule Café on Jefferson Street. Just a stone’s throw from where it all began. 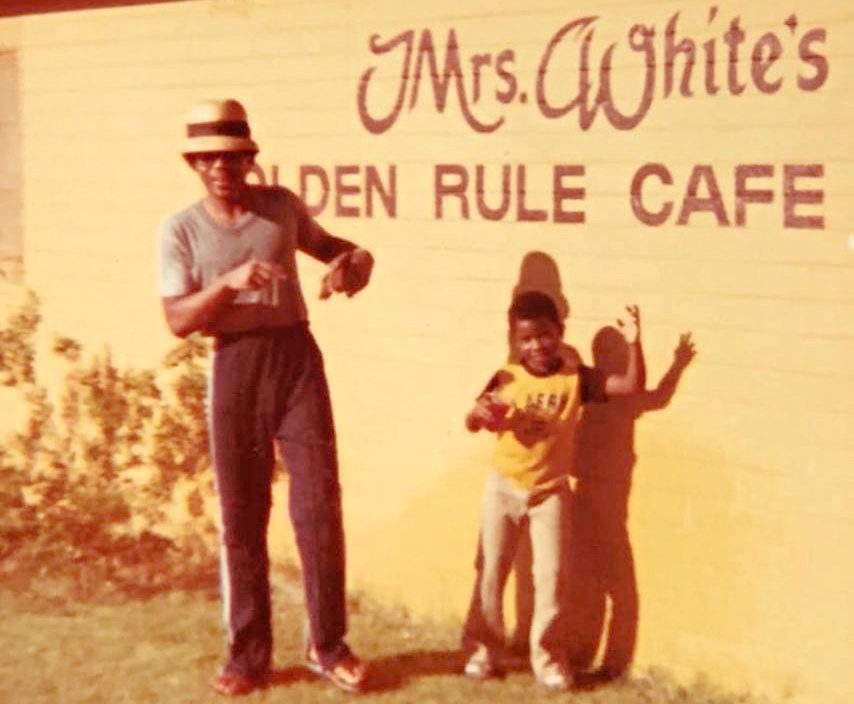 Authentic seasonings, fresh ingredients, and meticulous preparation bring a line of people out the door around lunch time. Each piece of chicken gets hit with two doses of seasonings, first in the spicy batter, and then in a dry coating that goes on after the chicken is fried.

These days, it’s a new generation of dignitaries filling the booths like civil rights attorney Benjamin Taylor, and sports stars like DeAndre Ayton and Larry Fitzgerald.

From the celebrity mug shots on the wall, the hip hop playlist, to the homemade Moon Pies, everything at Monroe’s is a vibe, adding to the “charisma, style, finesse and flair” of Downtown Phoenix, according to White.

Also on the rise: the upscale Arcadia neighborhood, home to White’s latest venture, Bruch & Sip, which opened summer of 2020.

Located at 40th Street and Indian School Road, White credits his wife/business partner, Rasheedah, with the concept and menu, which ranges from gluten-free, keto and vegetarian/vegan to classic comfort food dishes like pancakes, shrimp and grits and a fried chicken biscuit.

So what’s next for the serial entrepreneur? He said he’s cooking up something special.

“I am working on something new,” he said. “It’s gonna be totally different from what I’m doing now, and it’s going to be so freaking cool, just like all my other concepts.”