From buildings wrapped in hot pink decals to new palm trees being planted, Downtown Phoenix is gearing up for Super Bowl LVII.  Local artists have also been tapped to paint several murals in the city.

The National Football League (NFL) has partnered with Phoenix artist Lucinda “La Morena“ Hinojos, who is the first Chicana, Native American artist to work with the league on Super Bowl theme art.

Hinojos designed an elaborate, deeply meaningful piece that will be featured on an array of design activations for the upcoming Super Bowl LVII in Arizona, including Super Bowl tickets, out-of-home (OOH) displays and more.

Born and raised in Phoenix, Hinojos, also known as “La Morena,” has several murals across the city including a three-sided mural located in The Renaissance Downtown Phoenix Hotel and a largescale mural of beloved local photojournalist Nick Oza. 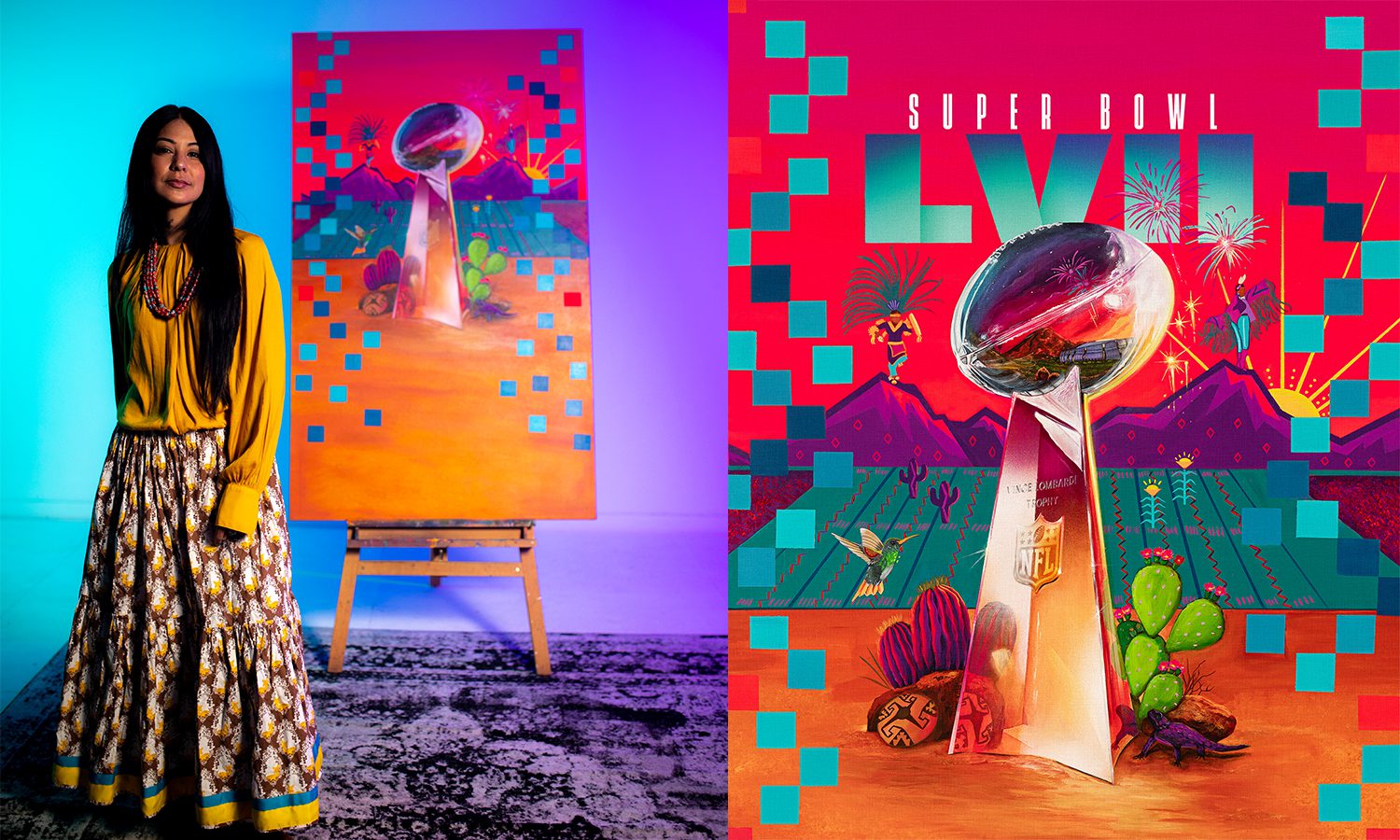 “I create art to hopefully provide an element of healing, unity and real human connection, so with this Super Bowl piece, I hope people from all over the world can have a dialogue about what this painting means to them …and that’s what’s beautiful to me,” Hinojos said in a press release. “I’ve always thought that the Super Bowl ticket is the centerpiece of this hallmark event, and for me, as the first brown Indigenous woman to design the ticket’s artwork, it is amazing and something I’m very proud of.”

As a Chicana, Native American artist with multicultural roots from Mexico and the Pascua Yaqui, Chiricahua Apache, White Mountain Apache, and Pima (Akimel O’Odham) Tribes, she uses her unique identity and experience to design an intricate, emblematic piece of art that the NFL will proudly display throughout Super Bowl LVII.

“Lucinda’s insight and direct, personal connection to the amazing and diverse history in Arizona made her the perfect partner for this project,” Marissa Solis, NFL SVP of Global Brand and Consumer Marketing said in a press release. “She is a gifted artist, a football mom and a woman who authentically represents her Chicana heritage, and we are so thrilled to use Super Bowl as a platform to showcase her beautiful artwork and by extension, spotlight the local communities integral to Arizona.”

The art piece itself features multiple symbols that represent key parts of the culture and history in Arizona. Reflected on the Vince Lombardi Trophy are the White Tank Mountains, which can be seen behind State Farm Stadium, home of the Arizona Cardinals and Super Bowl LVII. In addition, on each side of the trophy, Hinojos depicts a Fancy Shawl dancer and an Azteca dancer to pay homage to the Indigenous tribes in Arizona.

Her ultimate goal with her artwork is to unite and shed light on underrepresented communities of color in Arizona. 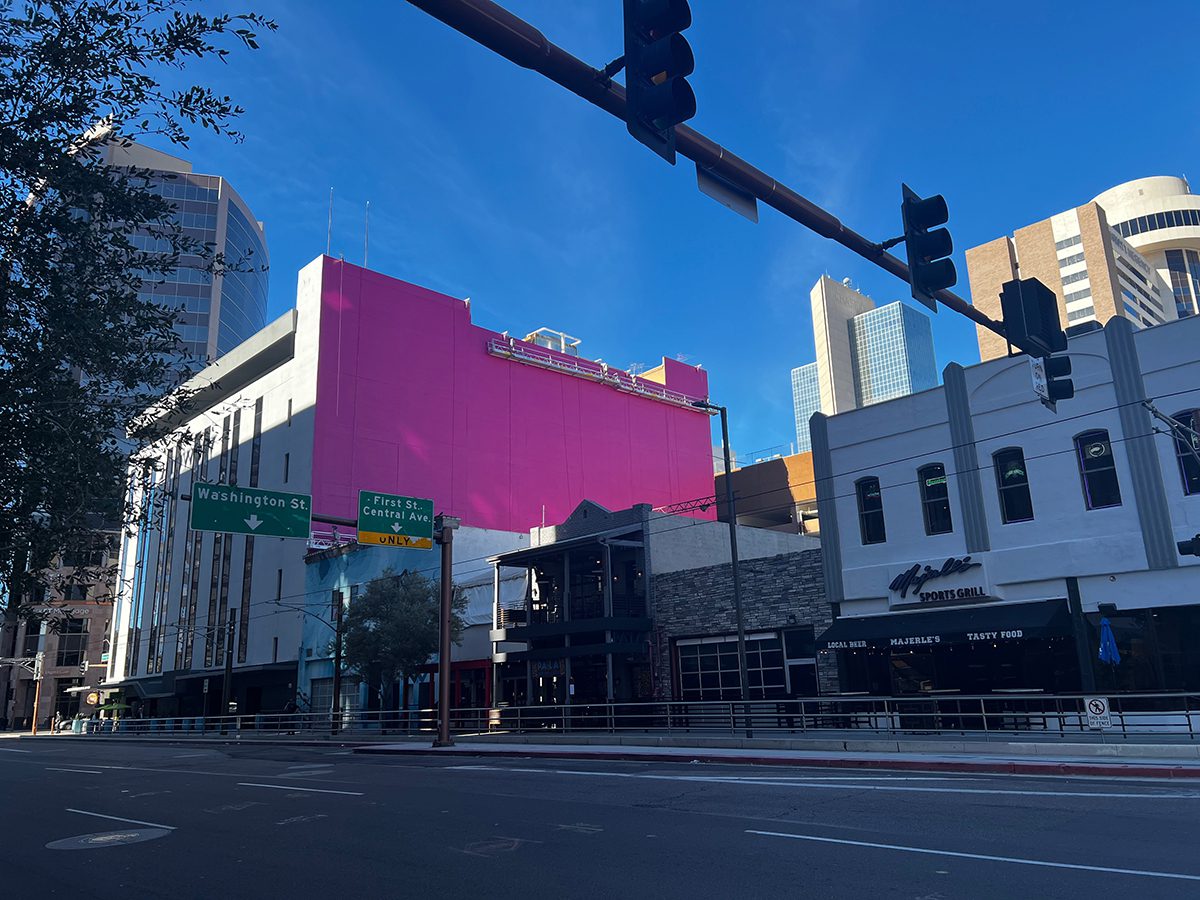 Another aspect of Hinojos’ partnership with the NFL is a large-scale mural she will paint in collaboration with Indige Design Collab of Cahokia Socialtech and Artspace, the Indigenous-led art gallery and creative space in the Roosevelt Arts District.

Fellow Native American artists Randy Barton of Diné/Navajo descent, Anitra “Yukue” Molina of Yaqui descent, and Carrie “CC” Curley of the San Carlos Apache descent will join Hinojos’ in painting the massive mural painted on the side of the old Korricks building on E. Washington St.

According to the press release, the artwork is a symbol of Indigenous collaboration and emphasizes the narrative of community and unity. It will feature meaningful contributions representative of each artist’s respective backgrounds, including an Apache Woman, a Diné/Navajo rug pattern and more.

NFL partner Wilson is also collaborating with Hinojos on a football design. The ball is inspired by the progression of Lucinda’s own personal artistic journey and how important heritage and community are to her. The ball will be available for purchase on http://Wilson.com and at Super Bowl Experience at Phoenix Convention Center.

Super Bowl LVII will take place on Sunday February 12, 2023, at State Farm Stadium in Arizona, where a wide array of activations and experiences including Super Bowl Experience, NFL Honors, and more will take place throughout the week.

For more information on the Super Bowl, visit www.nfl.com/super-bowl.