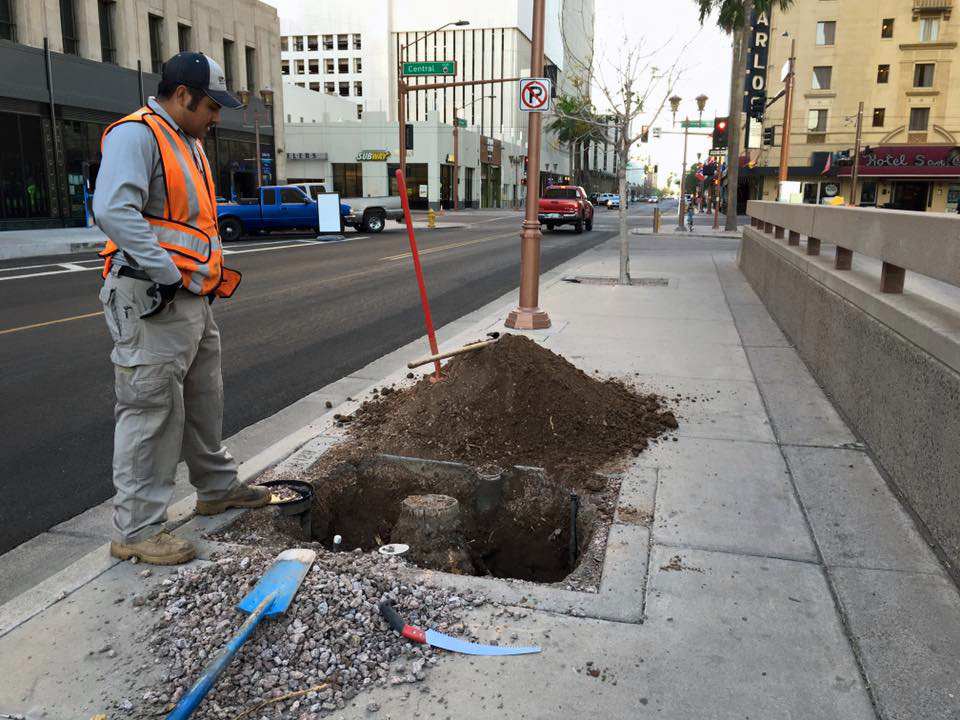 Planting and caring for trees in an arid, urban setting like Downtown Phoenix can be tricky. Especially during the summer months, when temperatures regularly climb above 100 degrees, powerful monsoon winds whip through the streets and dust storms pummel the city.
“We’re getting to a point where every monsoon, we just have trees toppling over or kind of snapping in half because they weren’t set up to succeed,” said Ray Cabrera, director of placemaking for Downtown Phoenix Inc. (DPI). “Part of the problem we have in sustaining a healthy tree is making sure the right tree is in the right place.”
For the 218 city-owned tree wells maintained by DPI, sometimes long-term survival means removing weaker, structurally deficient trees and replacing them with a different species that can thrive.
During the past year, the DPI Streetscape Team removed more than 20 dead or struggling trees and replaced them with salvaged Indian rosewoods and Chinese pistache — two species that provide a lot of shade and do well in a small space.
Planting native species like palo verde, palo brea, acacia and mesquite may seem like a no-brainer in Phoenix — and in the right place, they absolutely are. But according to Cabrera, desert trees can sometimes pose huge challenges in an urban setting.
“We’ve had a couple trees cause property damage and some cause personal injury because it was the wrong species for the wrong type of tree well,” he said. “For the inventory we control, we’ve been going in and making sure that the best possible tree is planted there and we’re maintaining and pruning to the highest industry standards.” 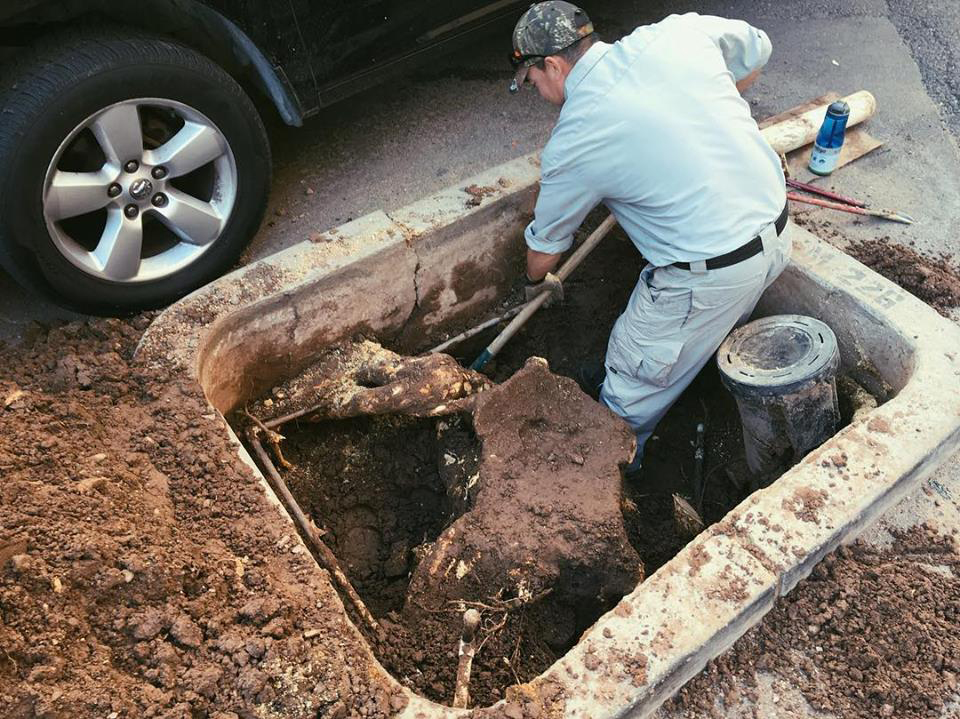 Tony Diaz, a member of the Downtown Phoenix Inc. Streetscape Team, removes a dead stump on Feb. 19 from an urban well on Monroe Street, soon to be filled with a live tree. (Photo: Brandi Porter)

Thorns, pollen, large seed pods, low soil volume and extreme pruning for pedestrian and vehicle clearance represent just some of the challenges of planting and maintaining native, desert trees in a city setting.
We’ve all seen it before: After a storm, a number of sad-looking palo verdes “roots up” in a grocery store parking lot or along city streets.
Many times, it comes down to the wells, or plots where they’re planted, which essentially equate to a hot, tiny box surrounded by asphalt and concrete. This often prevents the roots from spreading out and providing stability, hence the toppling over. But the attrition can also be attributed to placement and adjacent uses.
Instead of replacing toppled desert trees with another, just to replace again in five to six years, the City of Phoenix’s urban forestry experts worked with DPI and other professionals in the region to enact a set of best practices.
In the early 2000s, the city’s tree palette, or species selection guide, was expanded to include more varieties that can thrive in harsh, urban conditions. Later in 2010, the City of Phoenix established a Shade and Tree Master Plan in hopes of breaking the cycle of loss, and establishing mature trees that can last generations.
Chinese pistache, Indian rosewood, live oak and live elm are currently phasing out dead or dying palo brea, palo verde, acacia and palm species.
While the new trees are non-native, they are drought-tolerant and will provide shade and beauty for years and years to come.
“Especially here in the desert, shade and the urban forest is so valuable, it’s such an important asset that we need to maintain,” Cabrera said. “We’re not saying we don’t want desert trees, we’re just kind of hamstrung by these old, obsolete tree wells that we have to make the best of.” 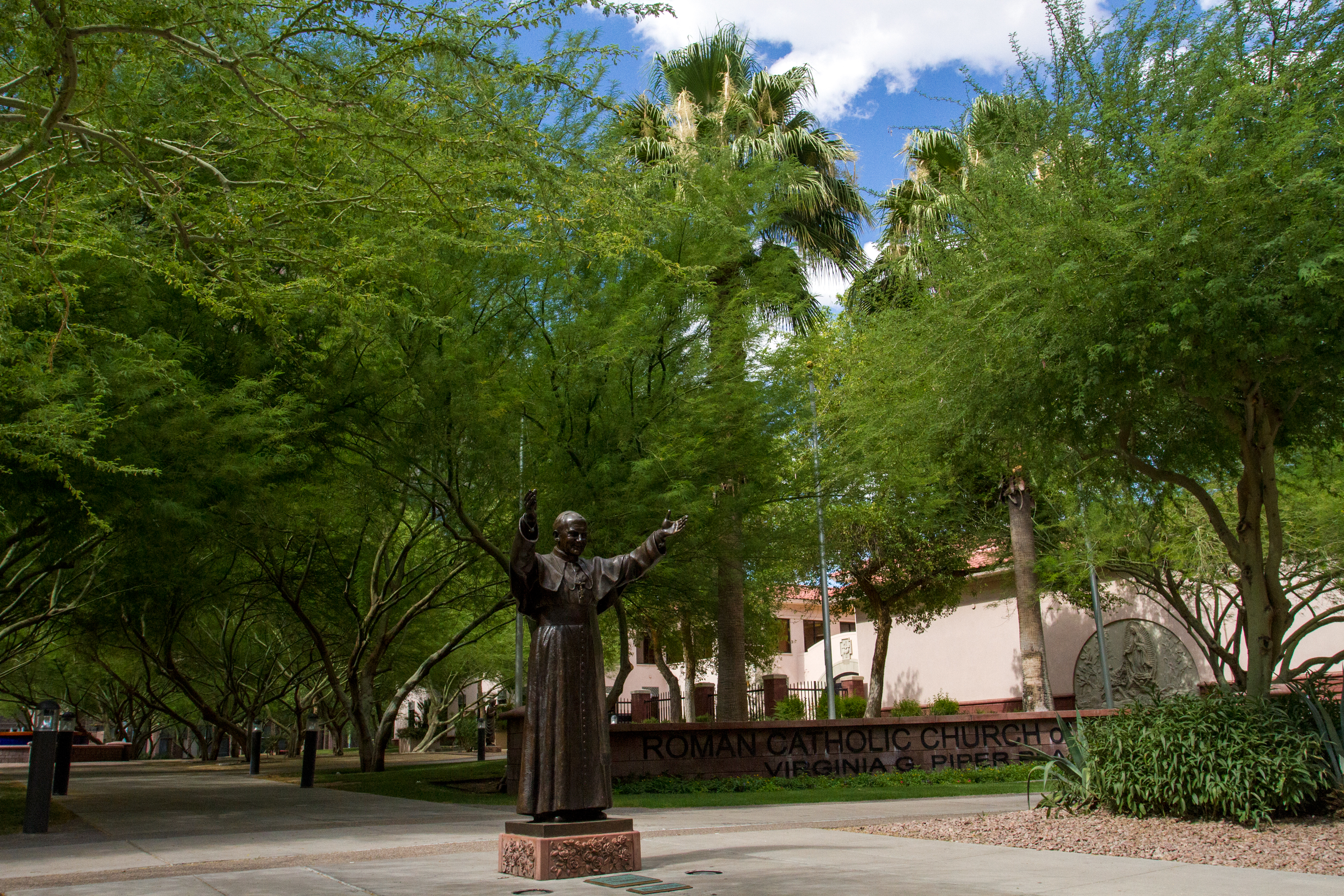 In fact, areas where desert trees can grow closer together with lots of room for their roots to stretch out, like Civic Space Park or Virginia G. Piper Plaza for example, provide lots of shade (because their canopy overlaps), beauty, and the trees’ structural integrity is much higher, with few casualties during the monsoons.
To learn more about downtown streetscape and urban forestry, contact Ray Cabrera, or check out the Regional Tree & Shade Summit March 9 at A.E. England Building, where issues like “right tree, right place” will be discussed.
We know you have instagram
#DTPHX