Although Downtown Phoenix may be considered a young city, there are numerous buildings, homes and warehouses that hold remarkable tales of the past.

Celebrate National Historic Preservation Month in May and visit a few of these historic buildings. Or, take a day to ride by them all — many areas are bike friendly.

Then: Built in 1917 by prominent physician William C. Ellis, this house was a landmark on a section of Central Avenue nicknamed Millionaires’ Row.

Now: Home to Arizona Humanities — a nonprofit that encourages Arizonans to explore history and culture. 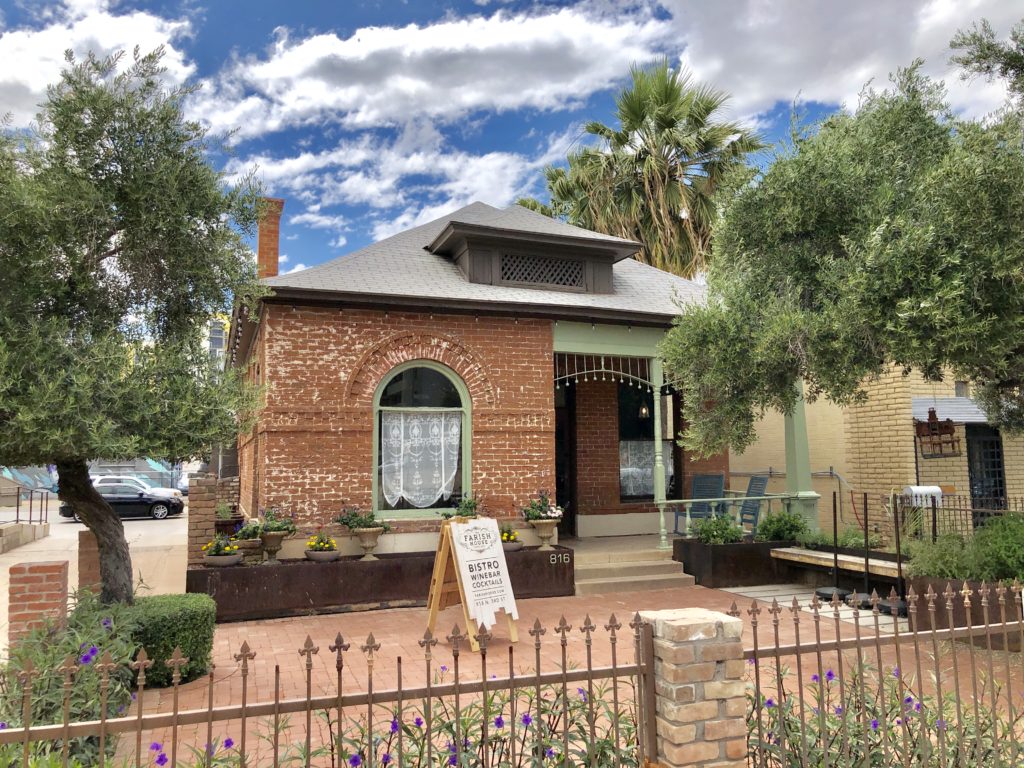 Then: Nestled near the southwest corner of Garfield and Third streets since 1899, this brick house was the home of Phoenix’s first city manager, William Farish.

Now: The Farish House was transformed into a quaint restaurant under the same name. 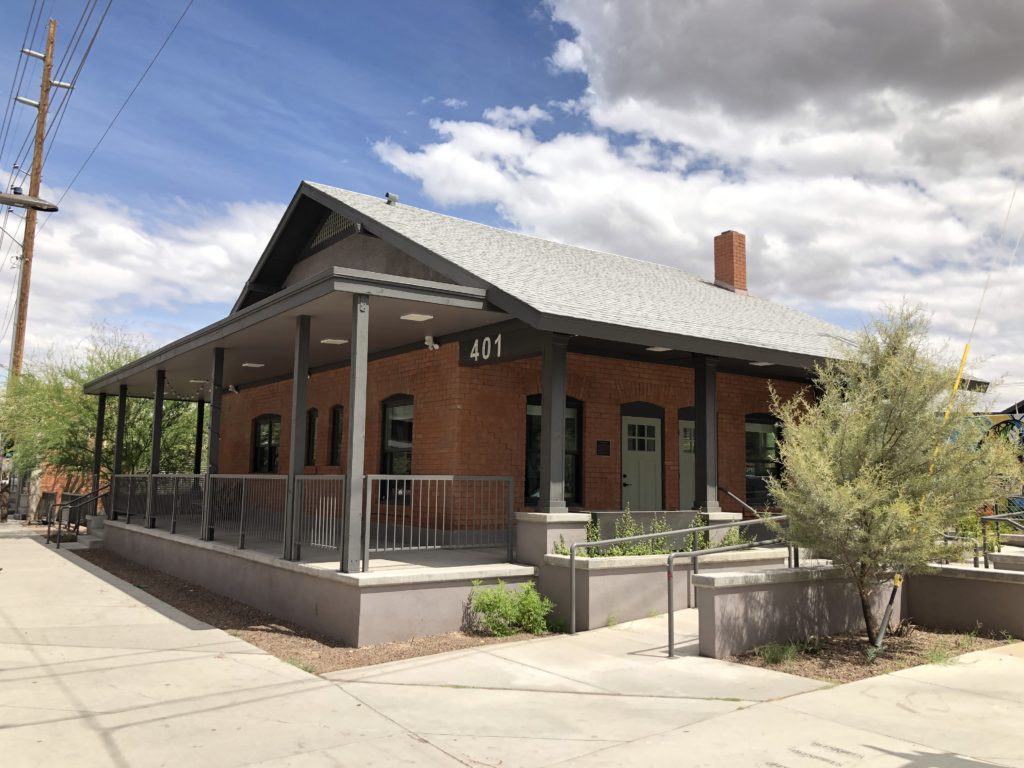 Then: The historic 1910 bungalow was originally located on the north side of Roosevelt Street.

Now: Wurth House was moved in 2015 across Roosevelt street to save it from demolition. It’s now used as office space for Local First Arizona. 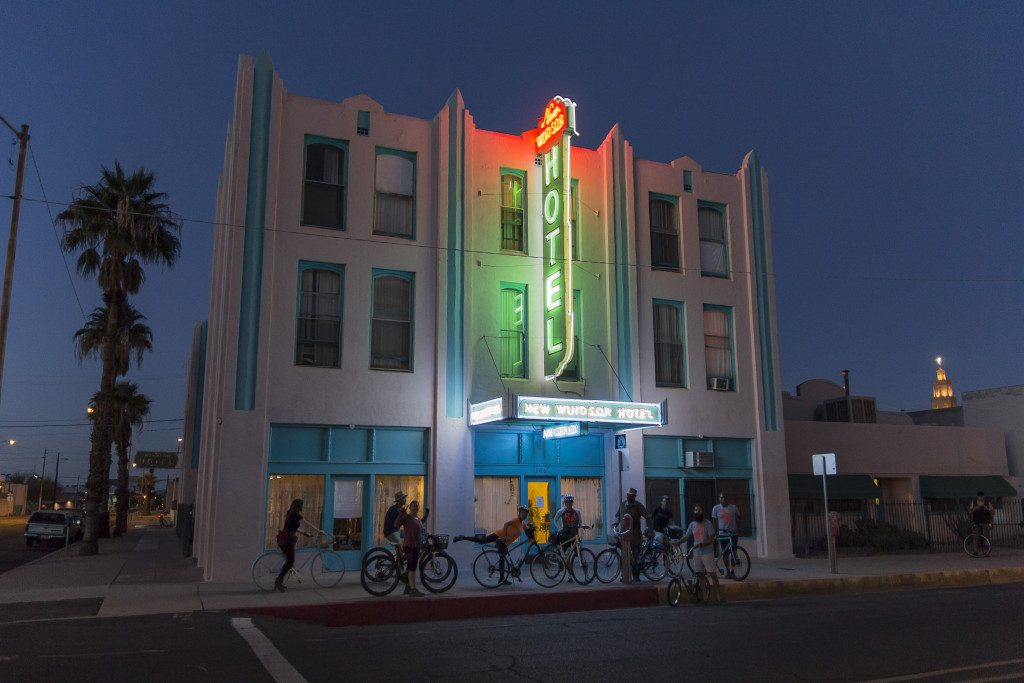 Then: Originally called the 6th Avenue Hotel, this structure is one of the only hotels that remains from Phoenix’s original townsite. Built in 1893, the building has undergone a couple of name changes and an addition over the years.

Now: In 1925 it was renamed to Windsor Hotel, and later, after an addition was added, renamed one last time to the New Windsor Hotel. Its rare style of architecture captures the transition between Victorian style and 1930s Art Deco style.

Then: Constructed in the 1930s, this building — like many others in Downtown Phoenix — was originally built to house a car dealership.

Now: Over the years, it has undergone extensive modifications; however, original wood trusses, steel window frames and other original details are still intact. These features ultimately led to the building’s Historic Preservation overlay approval in March 2017. The building has now been converted to a music venue called The Van Buren. 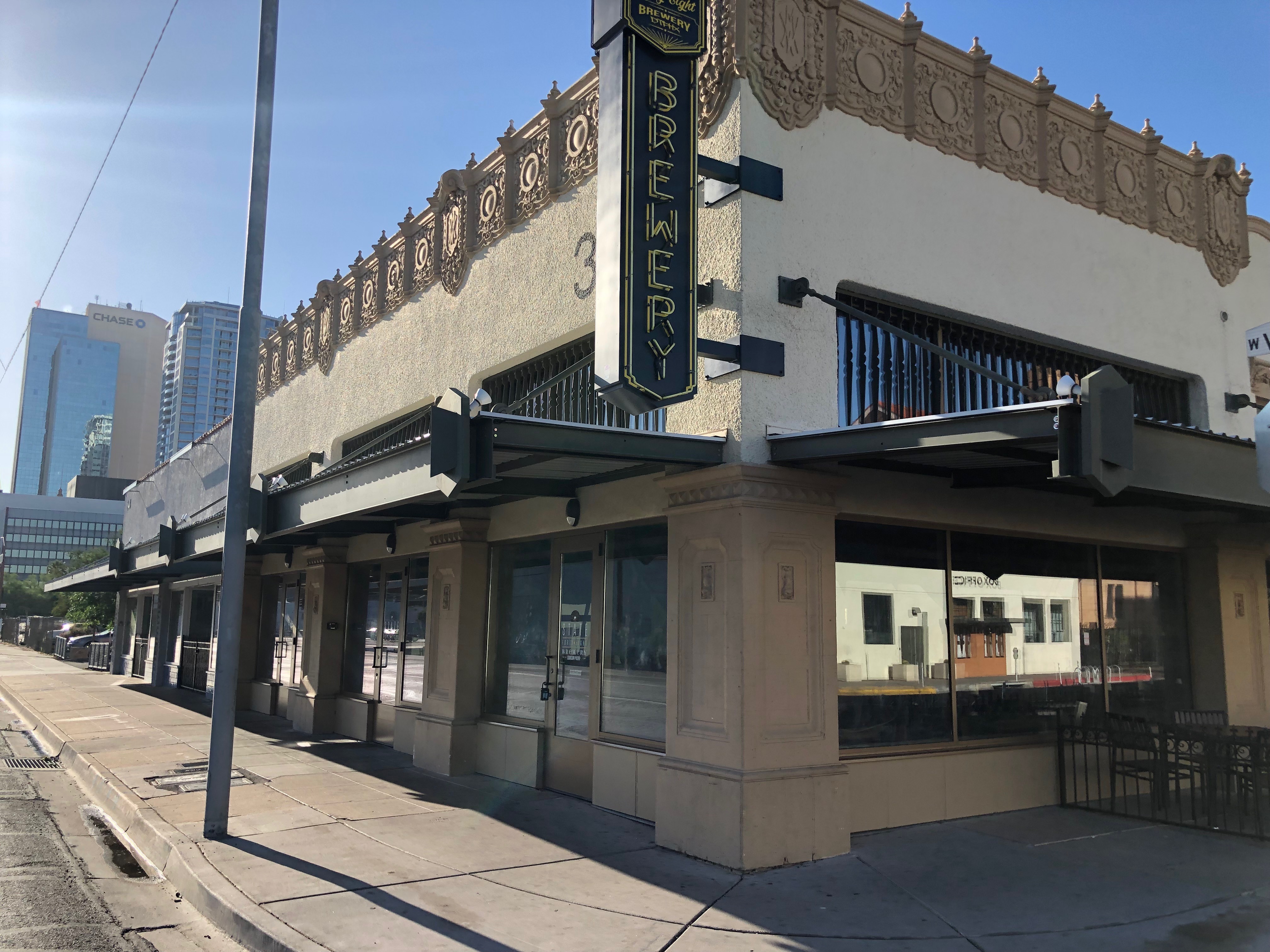 Then: Brothers Leo and Ed Welnick built Welnick Bros. Marketplace in 1927 and operated the open-air “arcade” style marketplace through 1951. The building then became an automotive repair shop, warehouse and Dave Reiff Printing Co. 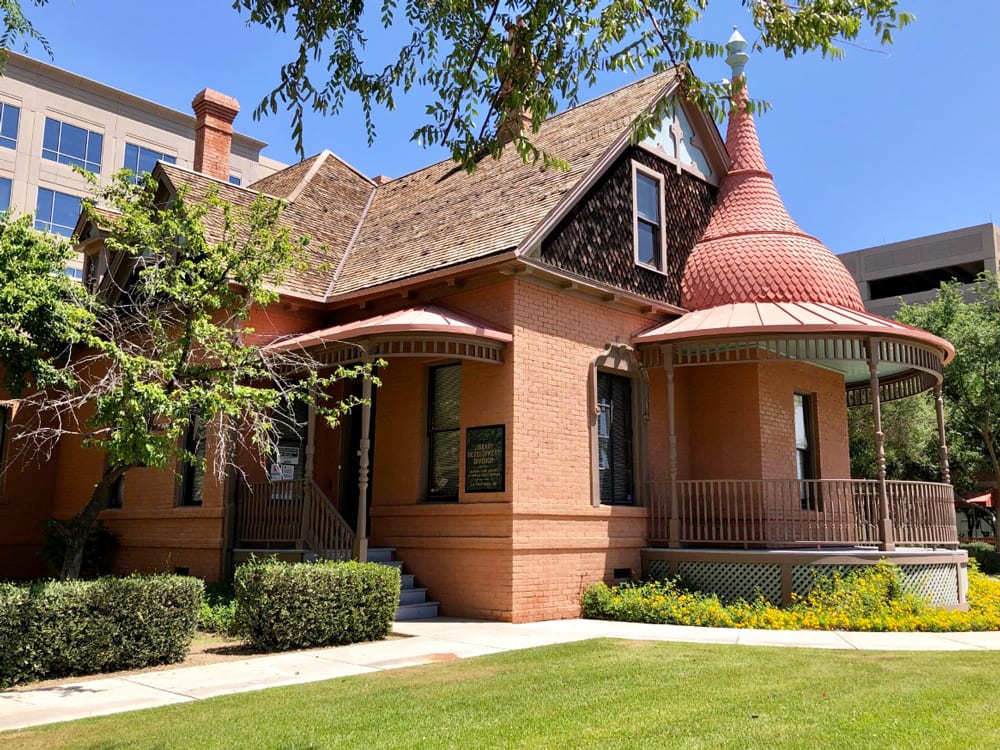 Then: Dr. John M. Evans and his wife Jennie lived in the downstairs portion of this house, and the upstairs rooms served as the doctor’s office. Built in 1893, the Evans House is one of the oldest Queen Anne-Victorian homes still standing in Phoenix (Rosson House in Heritage Square is another).

Now: Phoenicians dubbed this “The Onion House” after its onion-shaped dome, and it is currently owned by the State of Arizona, housing various offices since its restoration in 1988.

Then: Built in 1917, this brick building with a wood truss roof system is indicative of early 20th Century commercial buildings in Phoenix. Businesses in this location included the F.L. Hart Garage, the Arizona Awning Company and several others.

Now: Crescent Ballroom adaptively reused the northern end of the space to create a mid-sized music venue, bar and lounge. Sun Devil Auto operates out of the south end of the building.

Then: Built in 1920, the Neo-Classical Revival-style building was originally a J.C. Penny’s store, and later housed the Central Arizona Light & Power Co. headquarters (precursor to APS), a furniture store and labor union offices. It was purchased by the City of Phoenix in 1959.

Now: The breakfast and lunch spot Sticklers occupies the first floor, and the American Institute of Architects is located on the second floor.

Then: Built in 1922 with four stories, this Second Avenue building added two more stories in 1928 and was modernized in the 1960s.

Now: The City of Phoenix sold the Ellis Building to Equus Development Corp. in 2019. The seven-floor, mixed-use building will incorporate office, residential, a basement speakeasy, ground-floor restaurants and a daycare. 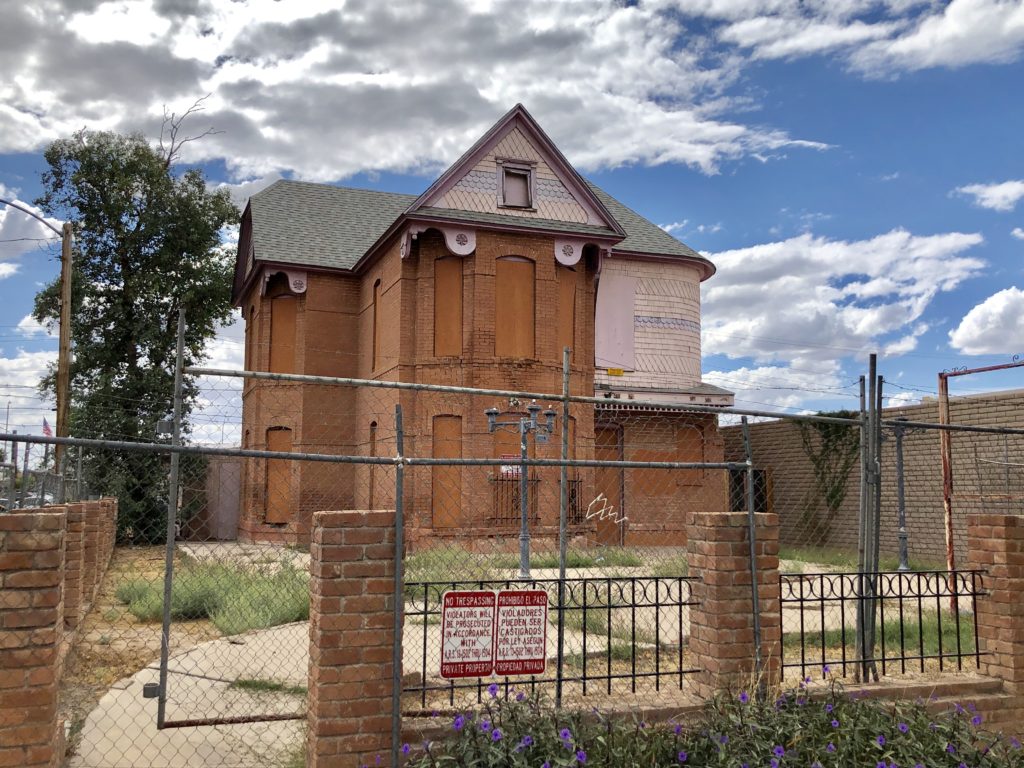 Then: Constructed in 1932, The Professional Building is an Art Deco office tower that originally housed the Maricopa County Medical Society and Valley Bank and Trust Company (later known as Valley National Bank of Arizona). A large rotating Valley National Bank sign was added to the top of the tower in 1958, and is prominently featured in the opening sequence of Alfred Hitchcock’s 1960 film Psycho.

Now: After sitting vacant for years, the building was renovated from 2014 to 2015 and opened as the Hilton Garden Inn Phoenix Downtown in December 2015. The rooftop was converted into Floor 13 Bar, boasting stunning views of Downtown Phoenix.

Then: Built in 1929, the Orpheum Theatre hosted theatre, plays, movies and vaudeville and was the cultural center of Phoenix at the time.

Now: In 1984, the City of Phoenix purchased this historic theater after it fell into disrepair, beginning a 12-year restoration project. Today, the theatre is still used for many cultural events and performances.

Then: The Italian Renaissance-style building opened in 1928 as one of the most modern hotels in the Southwestern United States. It was the first high rise with hand-operated elevators in the state and the first air-conditioned high-rise hotel in Phoenix.

Now: The hotel underwent a multi-million dollar renovation in 2003 that modernized its offerings while preserving its historic foundation. A stay there may even come with a visit from a ghost of Phoenix’s past.

Then: Hanny’s department store was the Phoenix destination for sophisticated men’s clothing from 1947 to 1986. It was also used for several years as training grounds for firefighters.

Now: After a three-year restoration, the building became Hanny’s Restaurant in 2008. Signs of the department store can be seen in the glass-covered elevator shaft and on the walls. 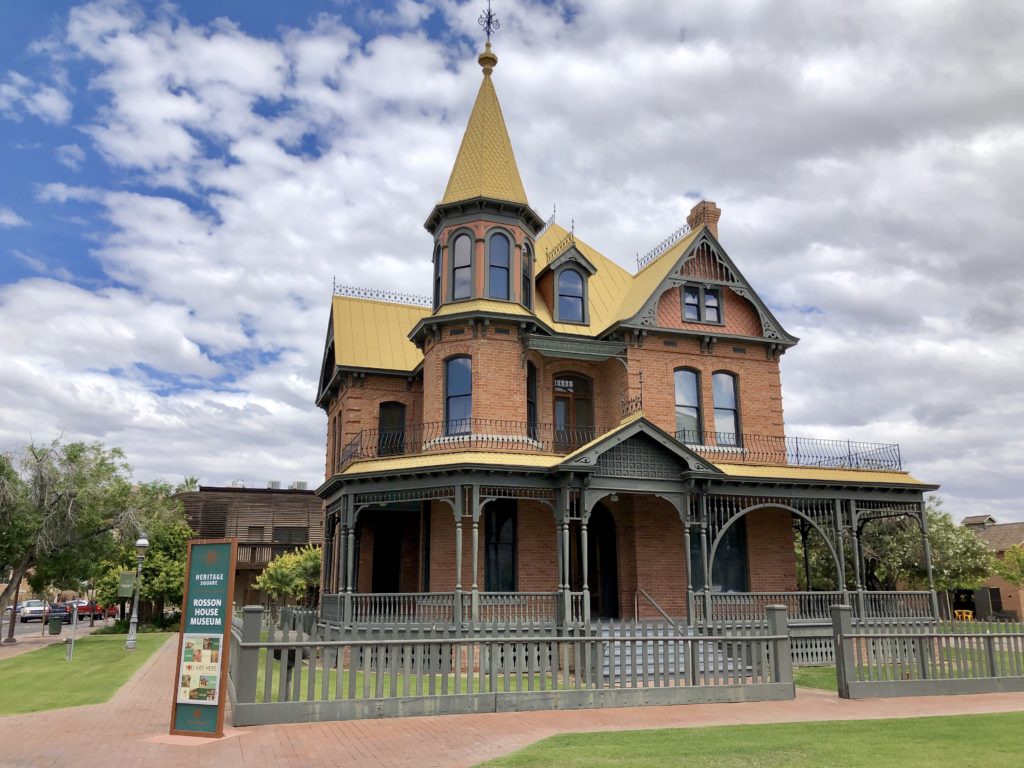 Now: The house was restored to its original condition, and now serves as a museum.

(Before photo: Facebook/City of Phoenix. After photo: Lauren Potter)

Then: The original adobe church, which was built on this site in 1881, had a pitched wooden steeple and shingled roof. In 1914 the church was rebuilt in Mission Revival/Spanish Colonial Revival-style. The interior is Romanesque style, complete with golden altars, Roman columns and the largest collection of stained glass windows in the state.

Now: The Church of the Immaculate Conception of the Blessed Virgin Mary (St. Mary’s Basilica) is the oldest Catholic parish in Phoenix, and the second-oldest church. It continues to provide spiritual care to a diverse and thriving downtown community. 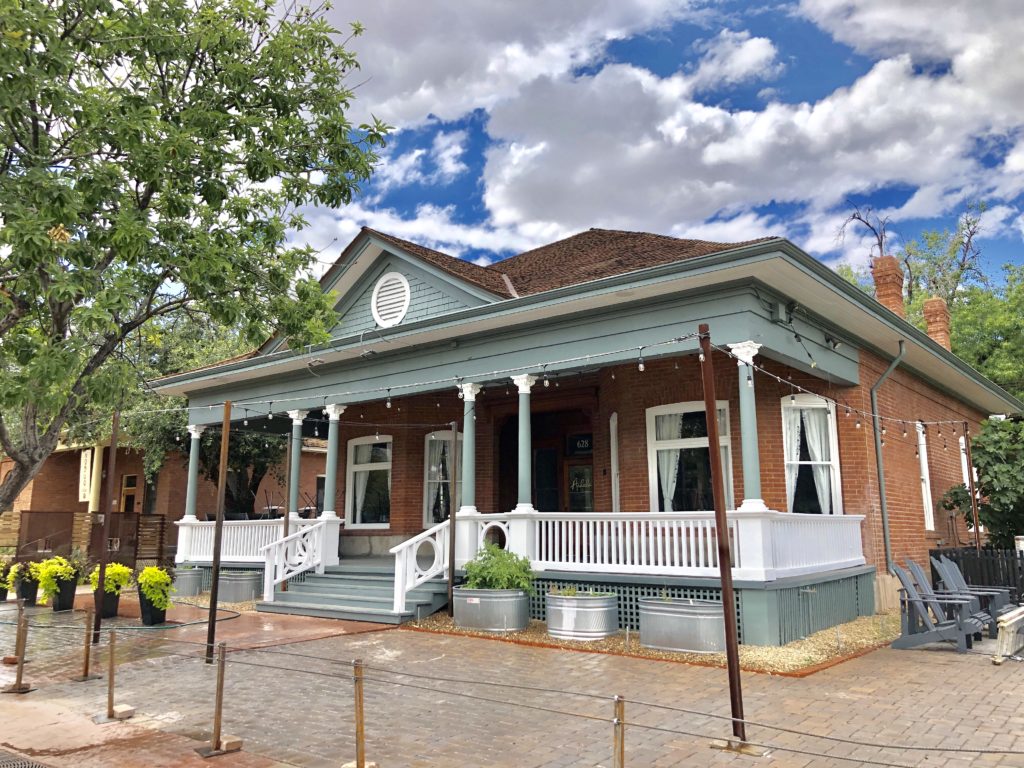 Then: A.F.C. Kirchoff, a prominent liquor dealer in Phoenix, had the house built in 1901. In 1906, Kirchoff sold the home to a Glendale rancher and warehouse owner, Alejandro Silva, who owned it until 1977.

Now: Still standing at 119 years old, you can experience the historic home first-hand by planning a date night at restaurant Anhelo in Heritage Square and Science Park.

Then: Built in 1930, the Title and Trust Building was the largest office building in Arizona at the time, and was home to the Phoenix Title and Trust Company. Arizona State Historic Property records denote the architectural style as Moderne, which was popular from the 1930s-1950s, thought it’s closely related to Art Deco style. The grand opening was January 31, 1931.

Now: Between 2002 and 2005,  renovations converted the office tower into a residential property comprised of 90 condominiums — and it was renamed Orpheum Lofts, after the nearby Orpheum Theatre. Fun fact: The opening sequence of Alfred Hitchcock’s 1960 film Psycho, was filmed from the roof of this building. 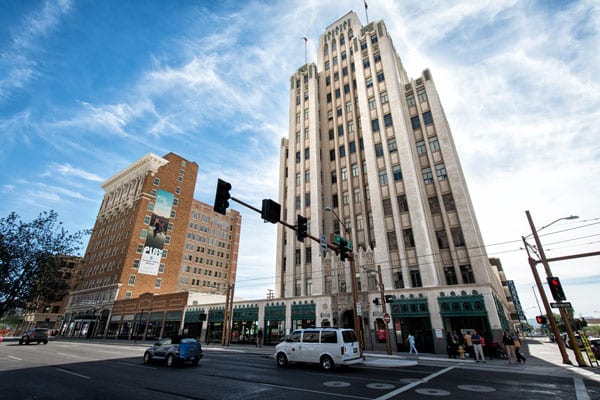 Then: Phoenix businessman George Luhrs founded the neoclassical Luhrs Buiding in 1924. Just to the west, Luhrs Tower is a 14-story Art Deco building that was built five years later, in 1929.

Now: The Luhrs City Center is now home to a number of offices as well as restaurants including Bitter & Twisted Cocktail Parlour, Serafina Coffee, Monroe’s Hot Chicken and La Madeleine. 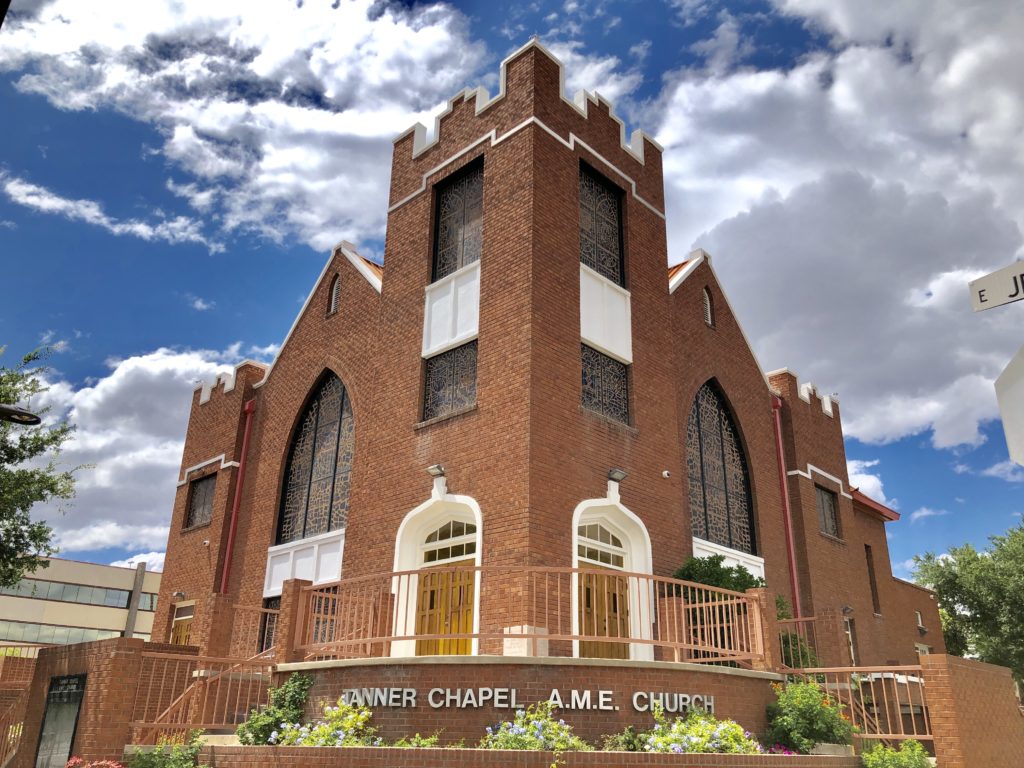 Then: The Gothic Revival style building was completed in 1929 and is said to be the oldest African American Church in Arizona. It is also the only Arizona church where Martin Luther King Jr. is known to have given a sermon.

Now: Tanner Chapel A.M.E. Church continues to strive to “bridge the gap between church and community.”

Then: Constructed in 1925, The Anchor Manufacturing Company made auto/bus bodies and ornamental structural iron. It was also an Anheuser-Busch distributorship and a vending machine firm. 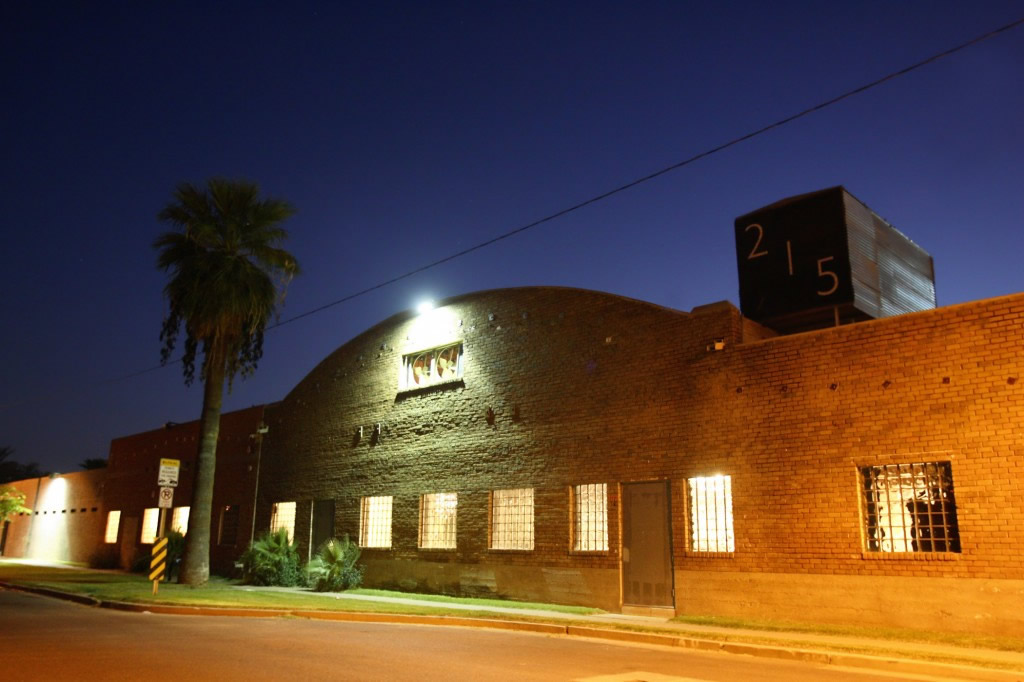 Then: Built in 1918, this Warehouse District beauty served as a commercial laundry business until 1999.

Then: In the 1920s, this building was the home of one of Arizona’s finest printing presses. It also served as a warehouse for Arizona General Electric Supply. 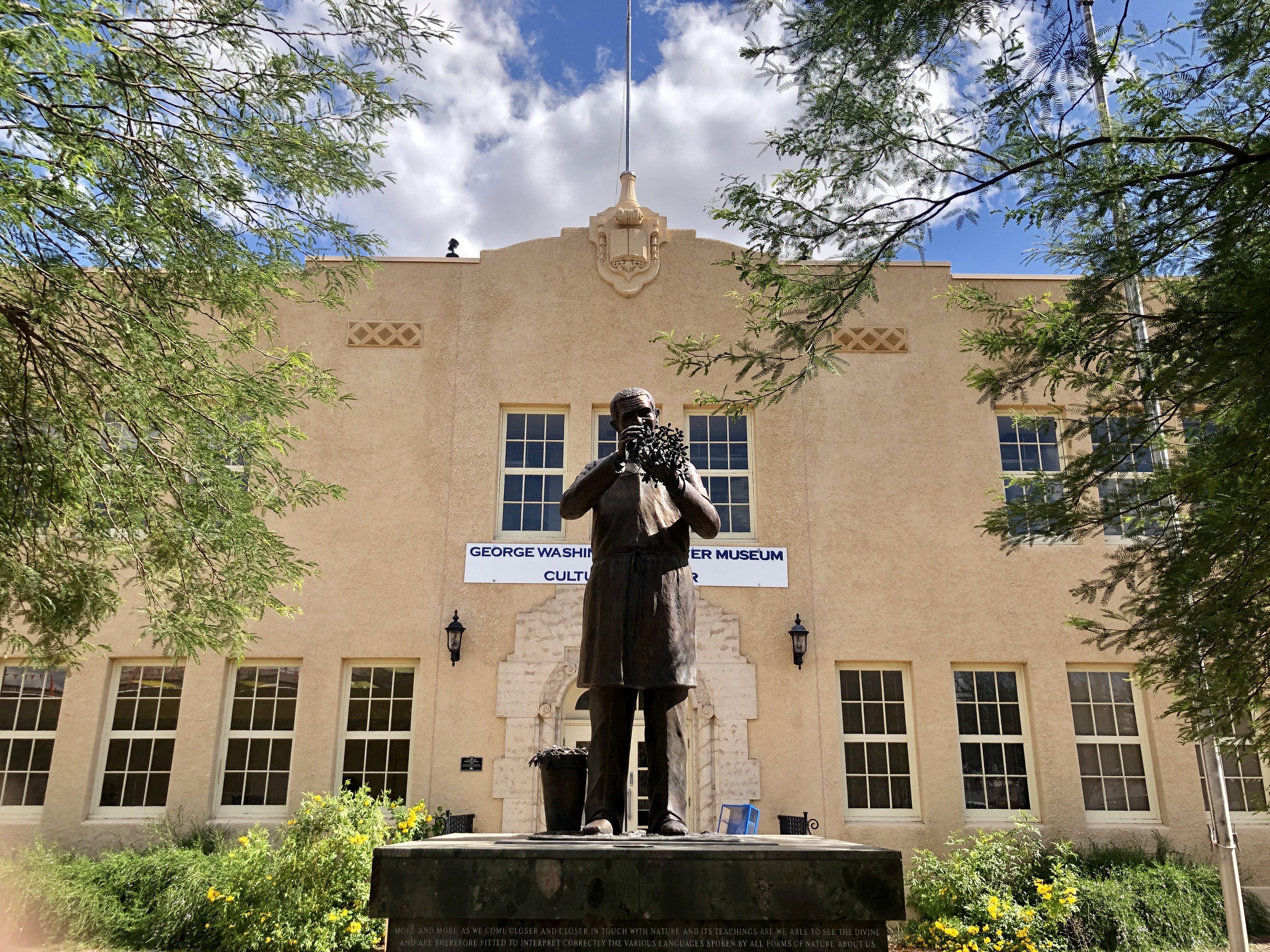 Then: The Phoenix Union Colored High School was open from 1929 to 1954 (later renamed after the famed black scientist and inventor, George Washington Carver, in 1943). After the school closed, it became a storage building until 1991.

Before: The Union Station of the Southern Pacific and Santa Fe Railroads was constructed in 1923, ushering in tourism to the Valley and promoting greater national visibility.

After: Phoenix waved goodbye to Union Station’s last Amtrak train in 1996. With a Valley Metro Rail station just a half-mile away, you can easily walk from Phoenix’s present transportation infrastructure to see the outside of the Mission Revival style train station. 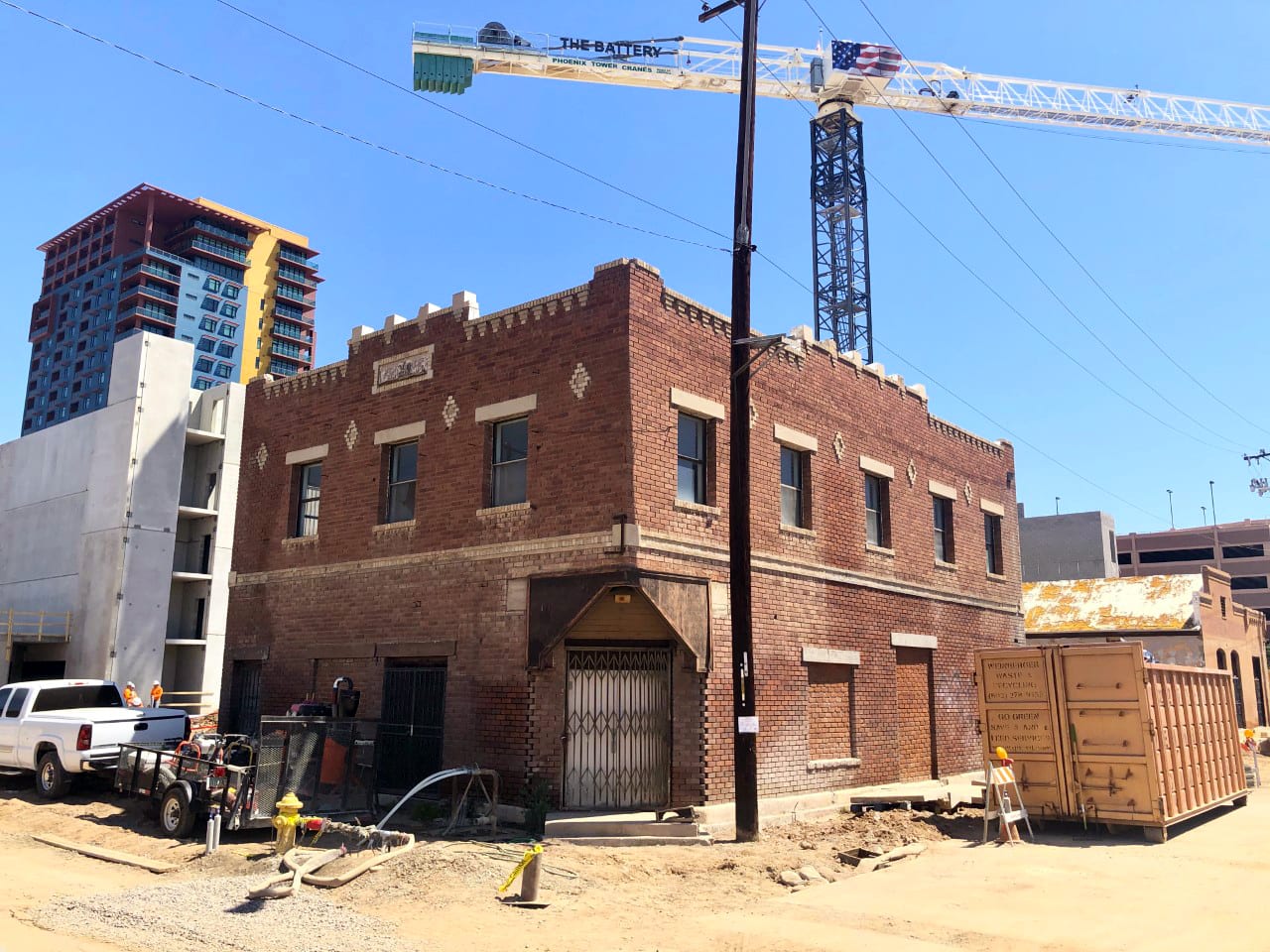 Then: Built in 1928, it’s known for its corner entrance and red brick façad. Located in the Warehouse District just a stone’s throw from the Union Pacific Railroad, it once housed a café on the first floor and apartments on the upper level.

Now: Gerardo’s and the adjacent Arvizu’s El Fresnal Grocery Store (1900) will be adaptively reused as part of a new residential project, The Battery apartments, coming online in 2021.

Did we miss your favorite DTPHX historic building? Have a fun, history-related story you want to share? Email Taylor Bishop at tbishop@dtphx.org.

*A version of this article was originally published on May 23, 2019. Lauren Potter and Fara Illich contributed to this story.
We know you have Instagram
#DTPHX
You may have noticed this historic beauty on the w