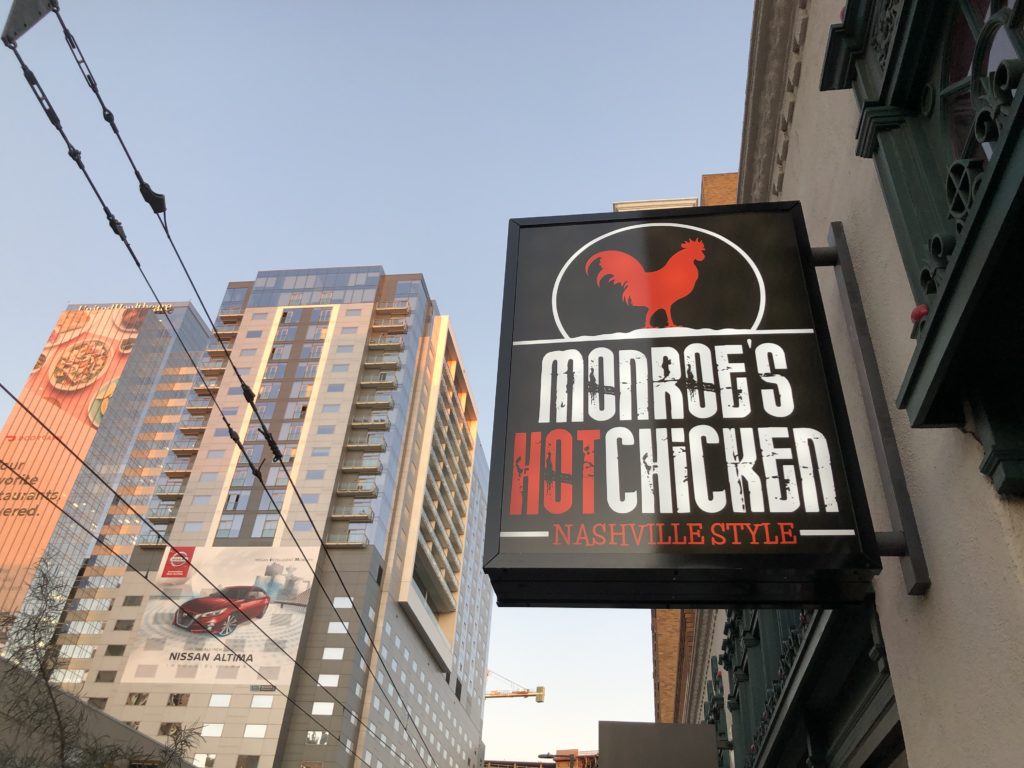 Downtown Phoenix may be 1,635 miles away from Nashville, but you don’t have to travel far to sink your teeth into Music City’s signature spicy dish.

The latest restaurant by Larry White, the owner of Lo-Lo’s Chicken and Waffles, Monroe’s is the first restaurant in the area to specialize in the Nashville staple, spicing up the Downtown Phoenix food scene in the process.

White noted Talking Stick Resort Arena, residential growth, and the future Fry’s grocery store as reasons why he brought his new restaurant to Downtown Phoenix. But the impetus behind the decision was also a personal one.

“This is my city — I’m a native, born and raised here,” said Larry White, owner of Monroe’s Hot Chicken. “It would mean a lot to me to help grow it and mature,” he said.
The concise menu includes three hot chicken dishes including a fried chicken sandwich with slaw and pickles served on a buttery brioche bun; a hot chicken Belgian waffle sandwich served with a warm side of maple syrup; and chicken tenders and fries. A mixed field green salad with cucumbers, tomatoes and carrots is also available. (But don’t worry: it can be topped with hot chicken, too.) 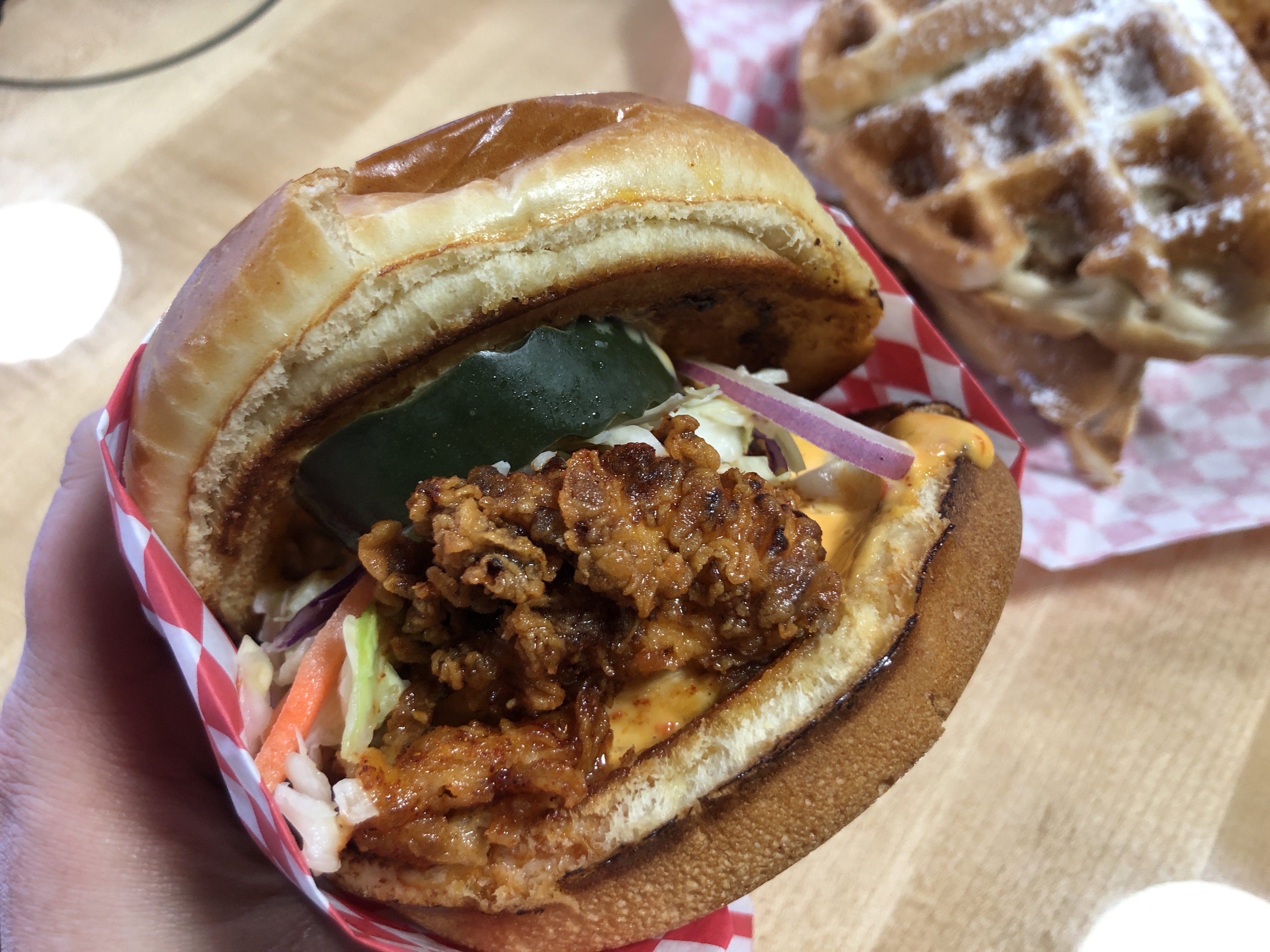 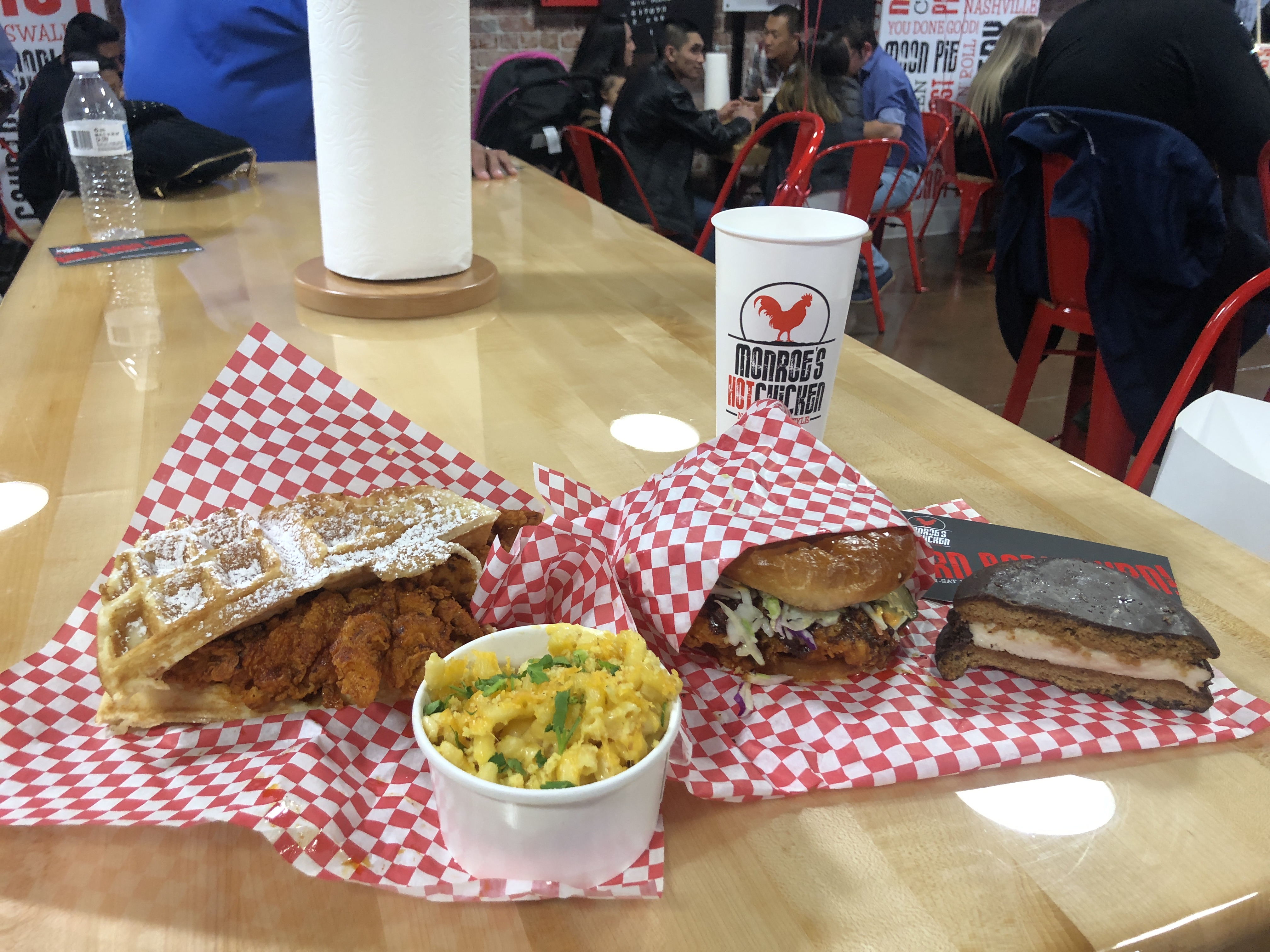 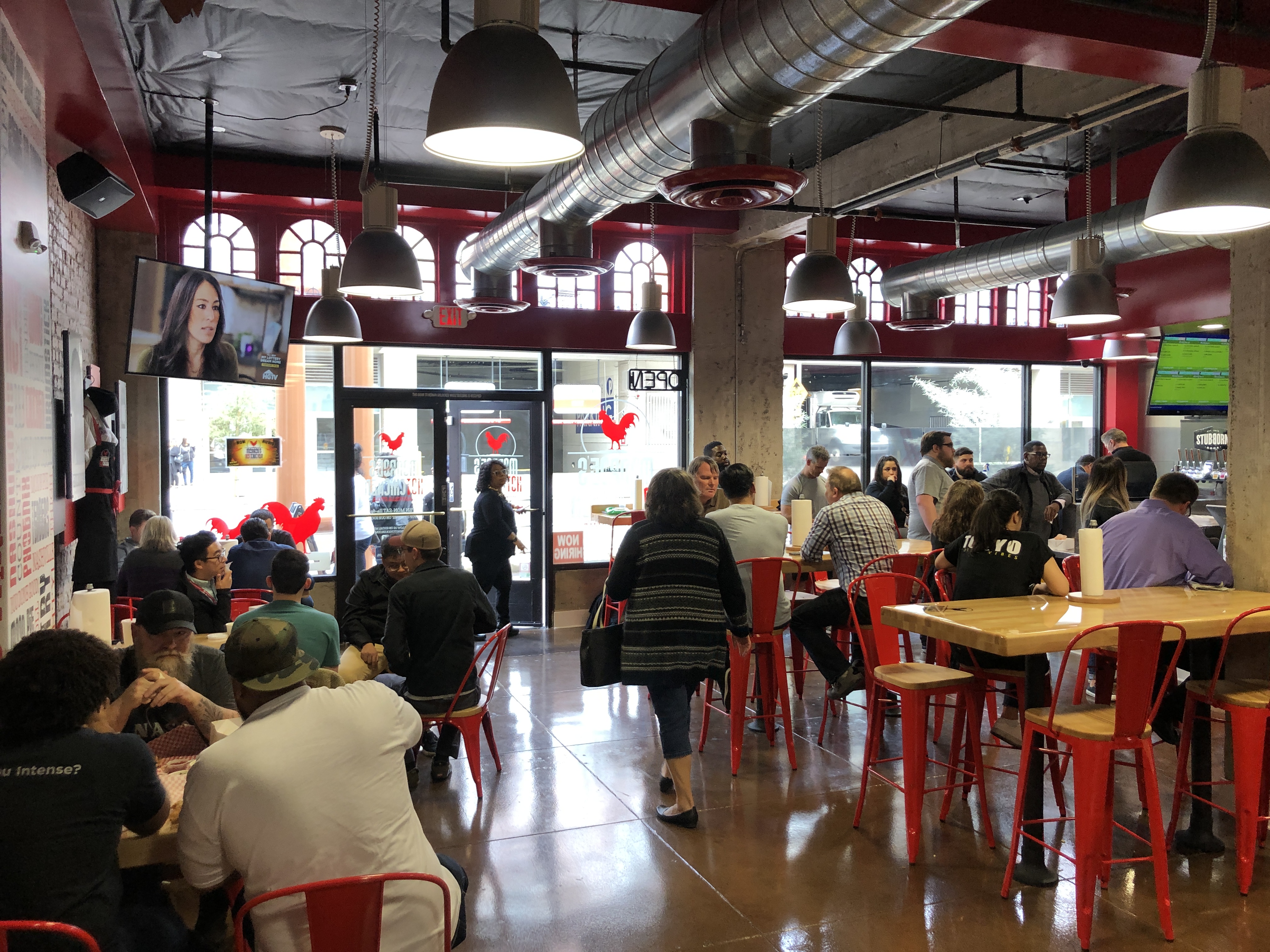 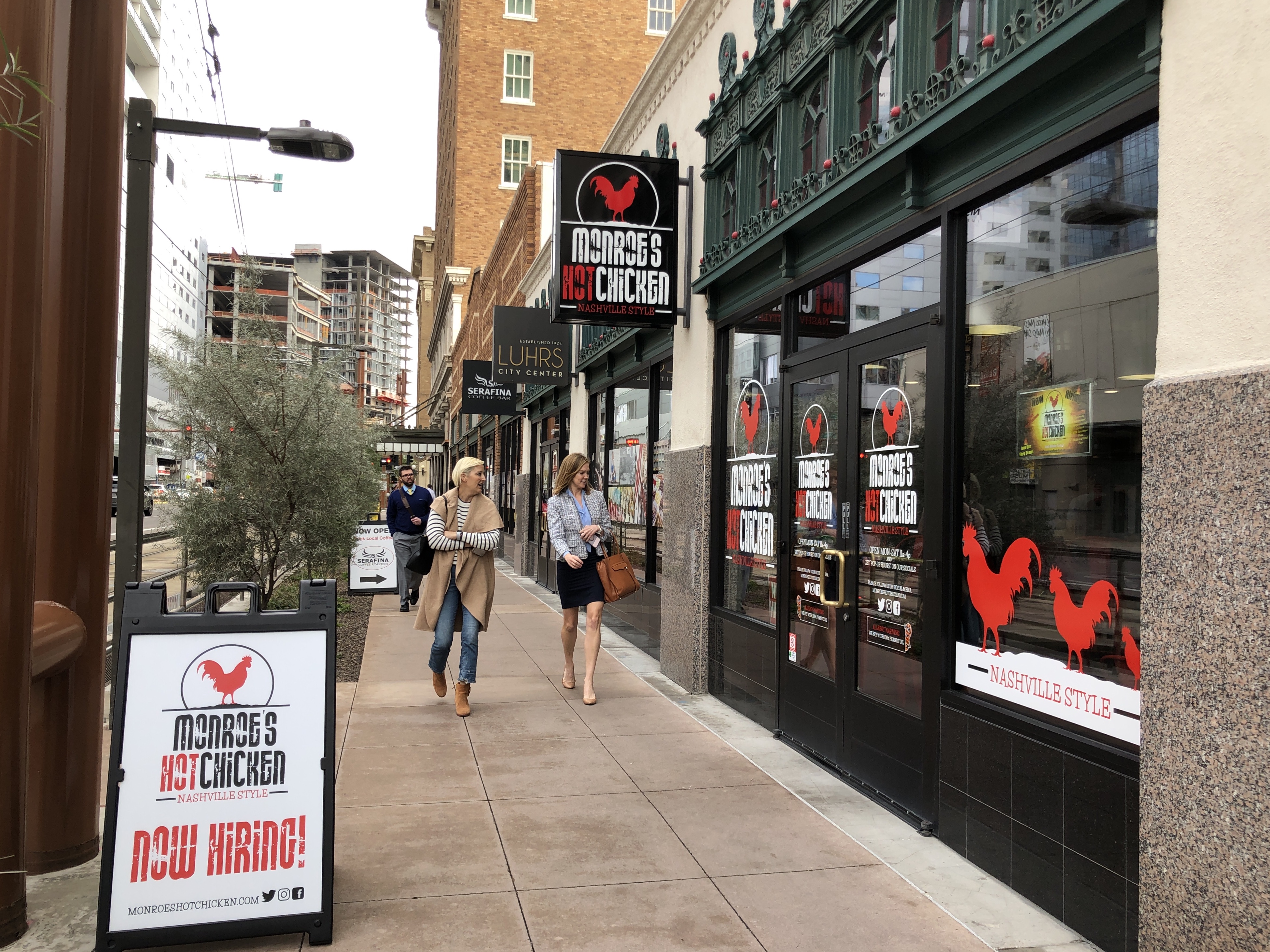 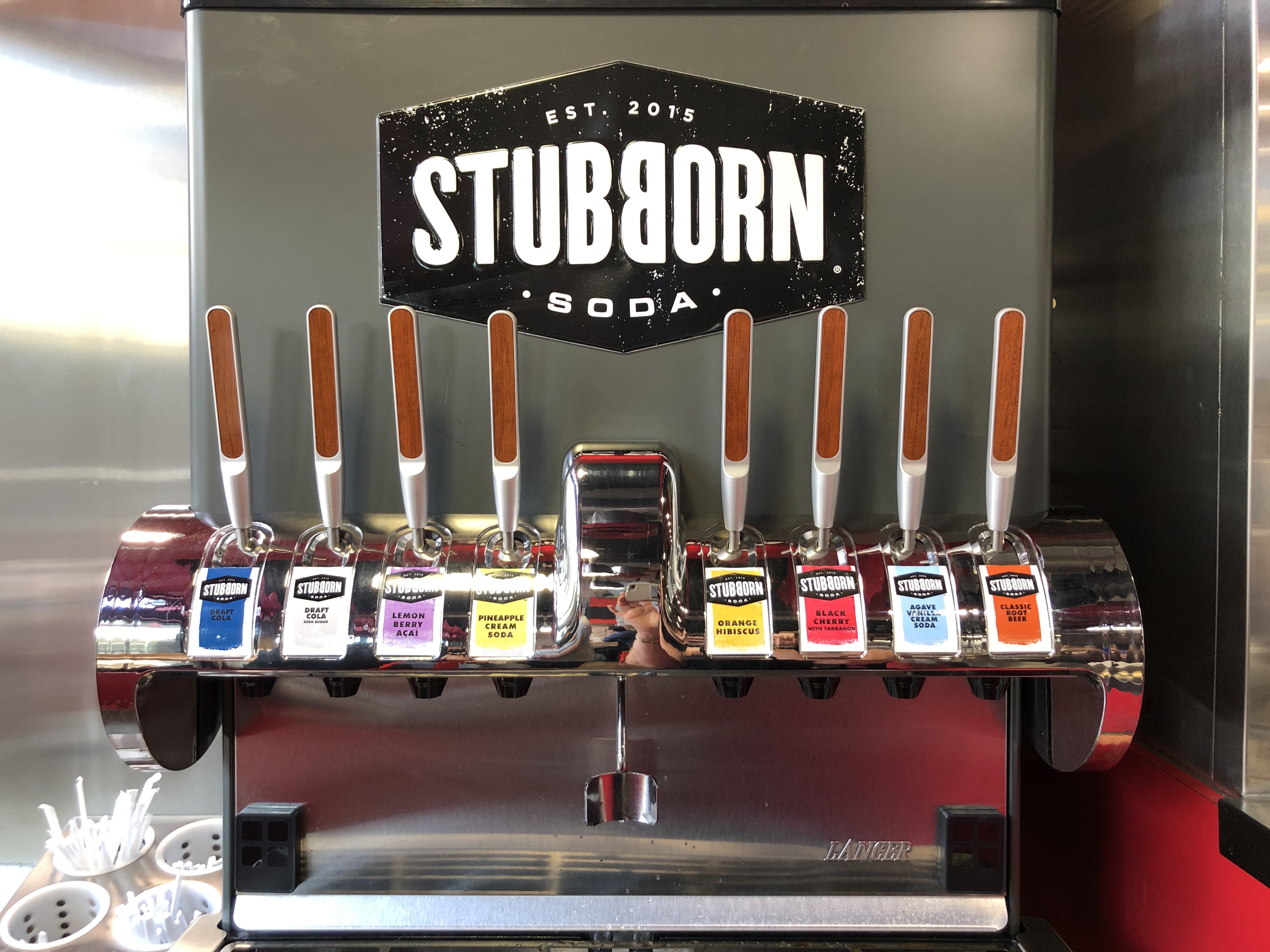 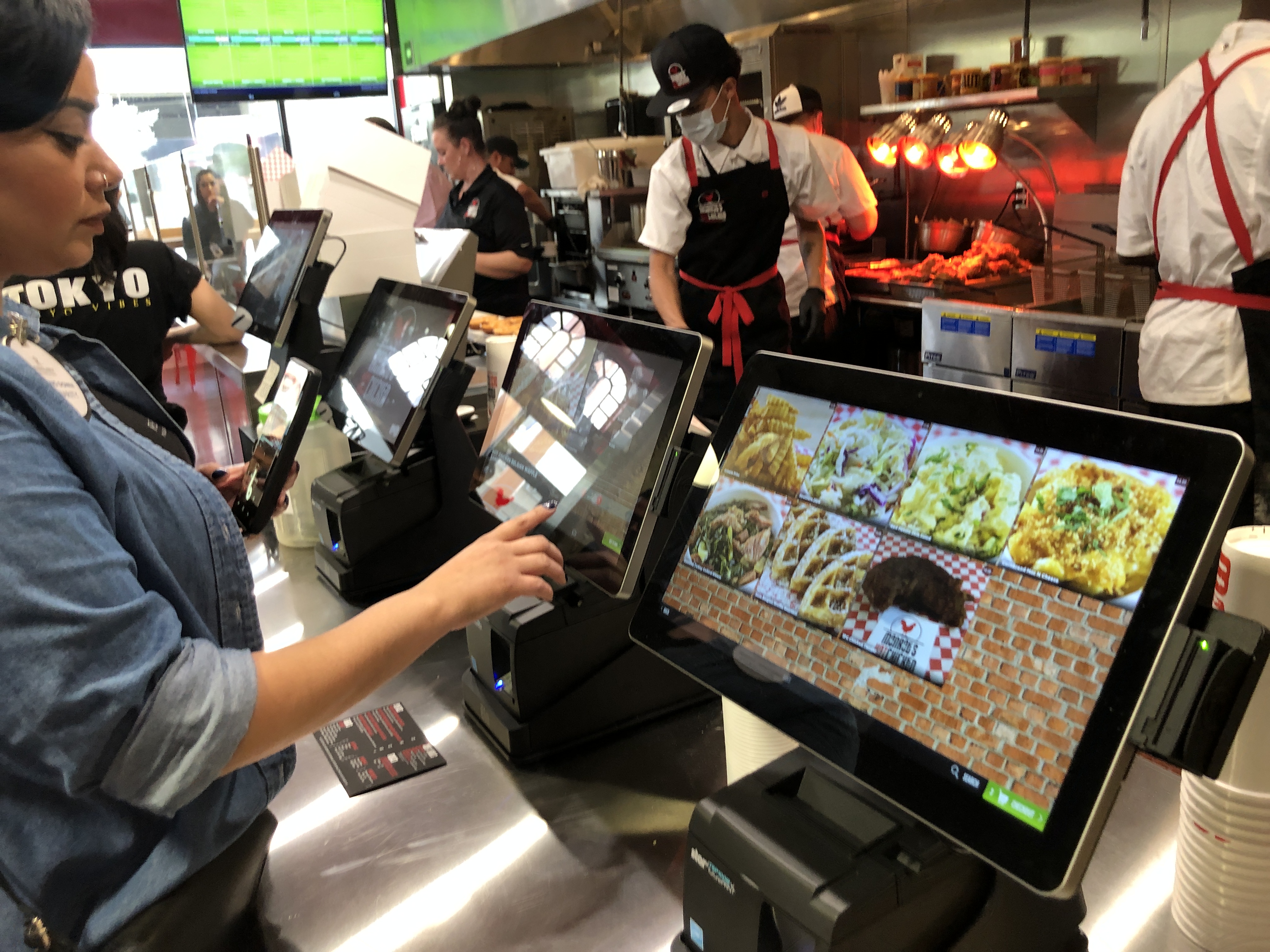 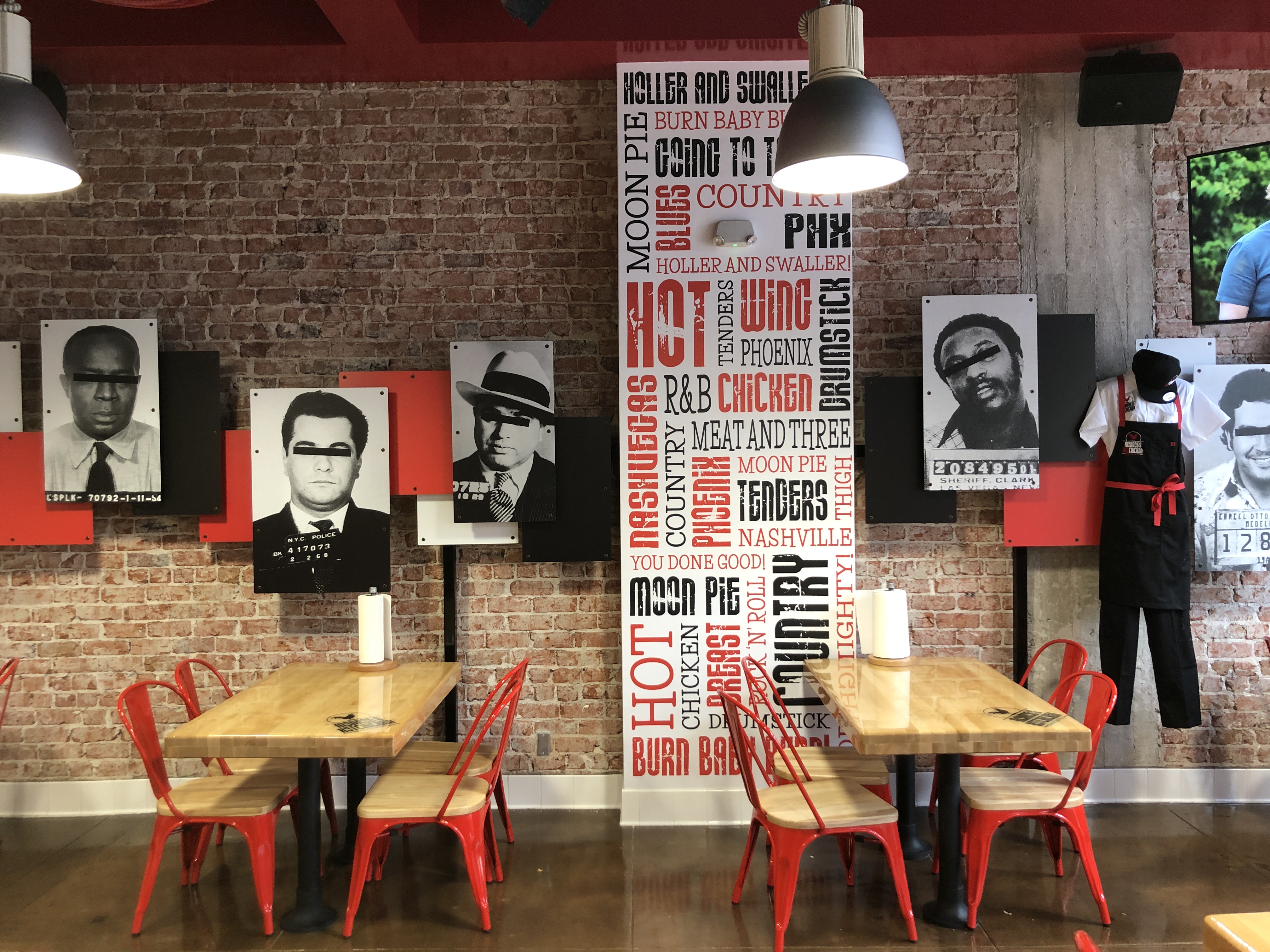 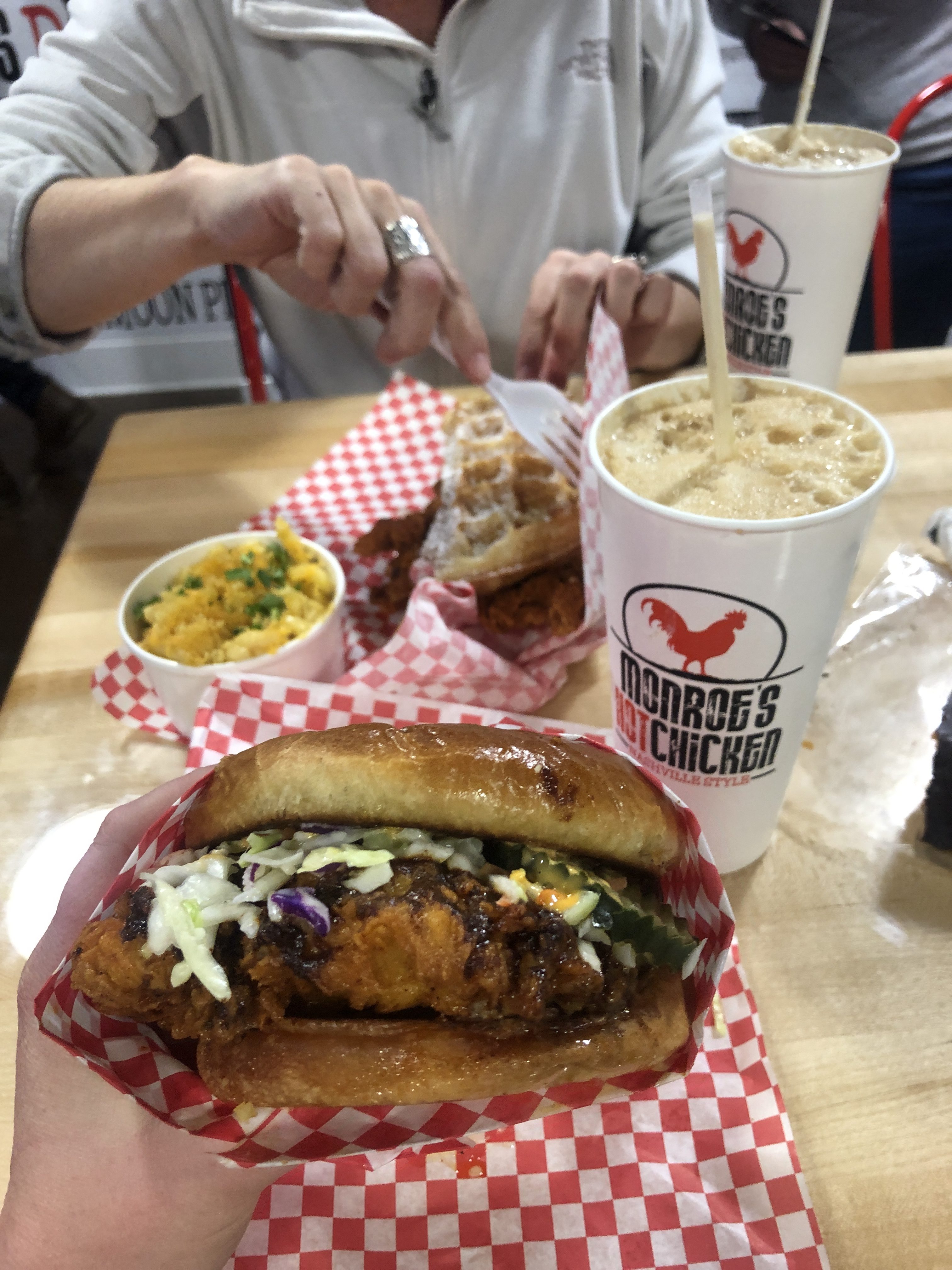 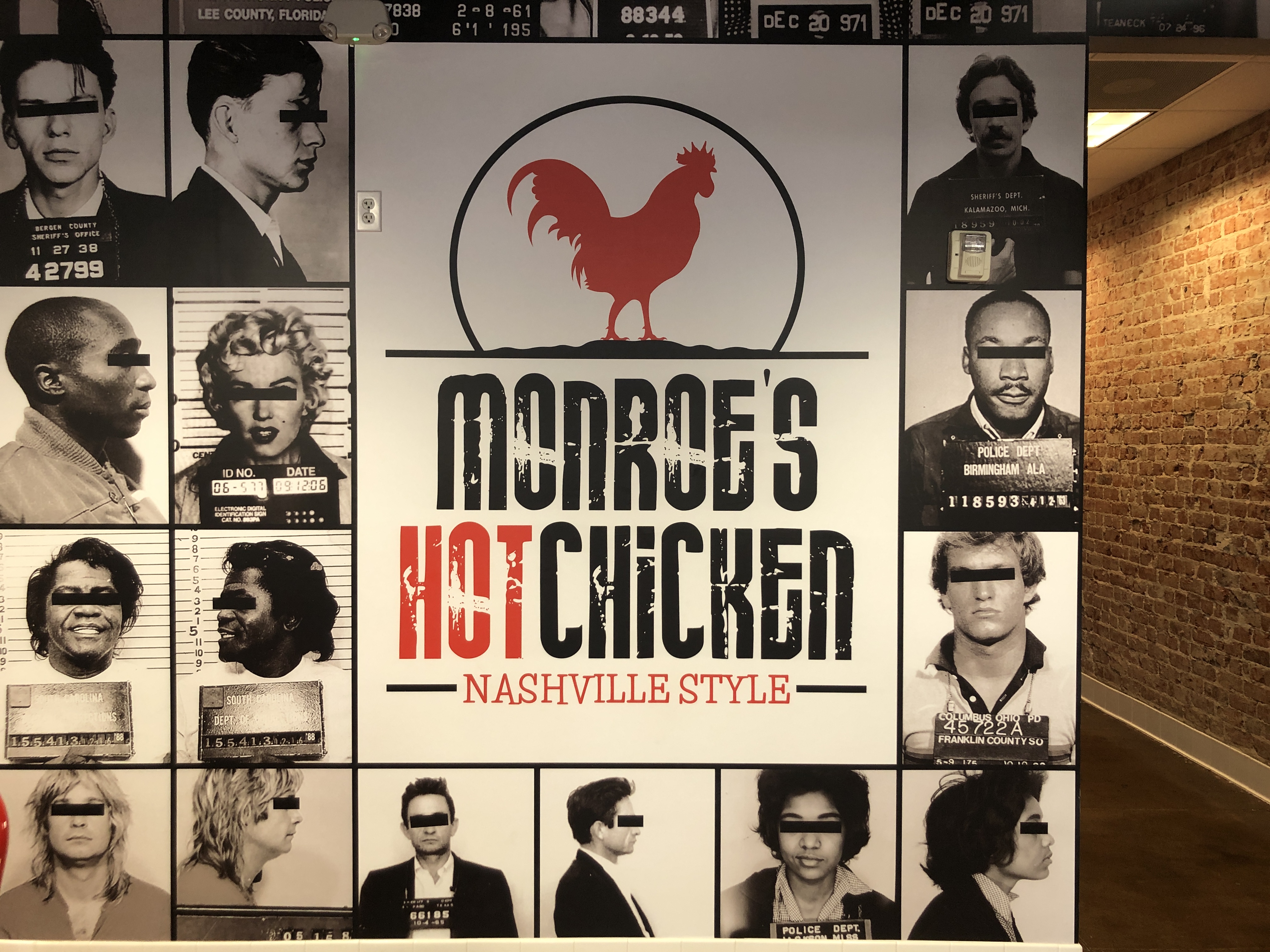 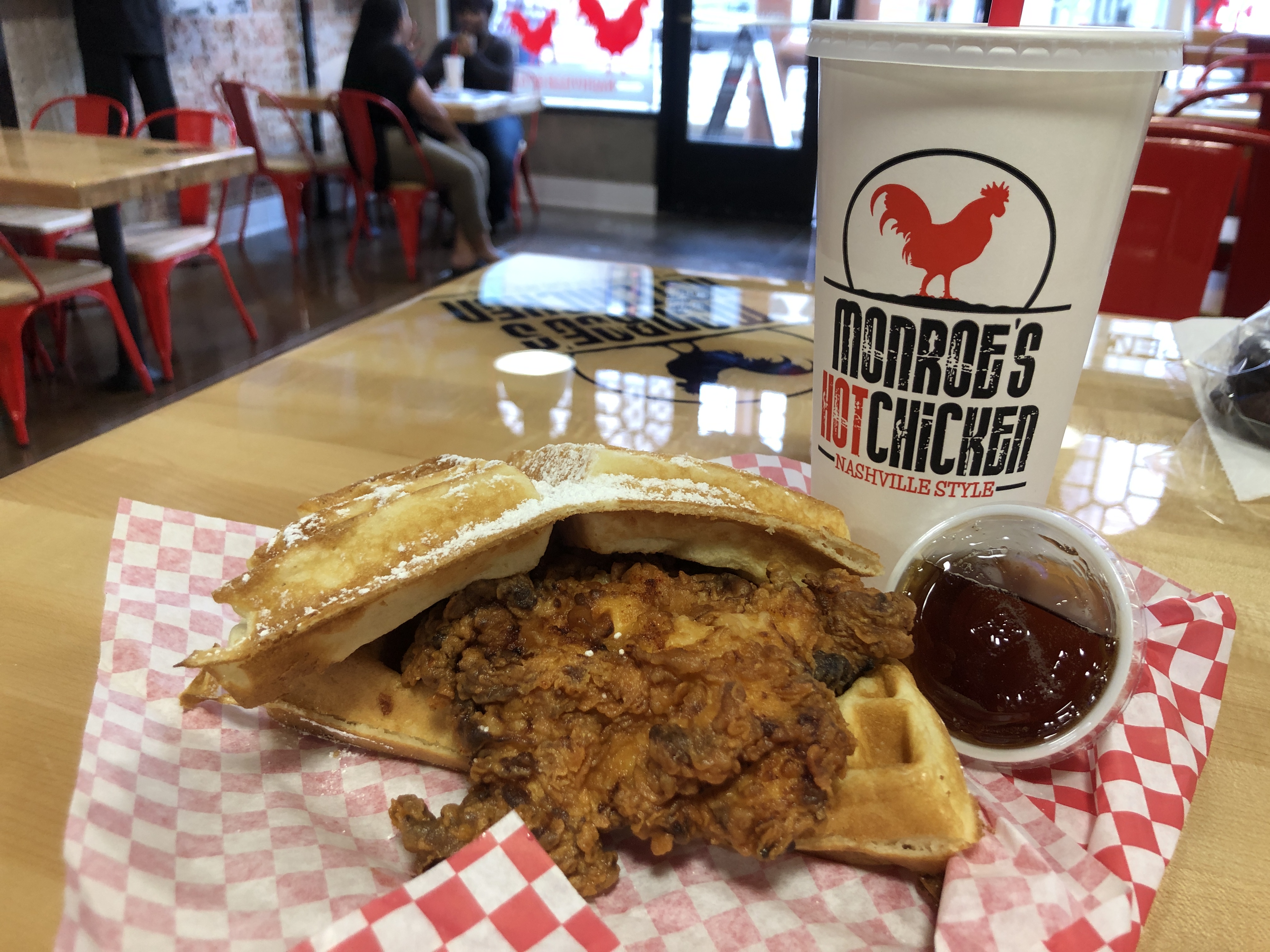 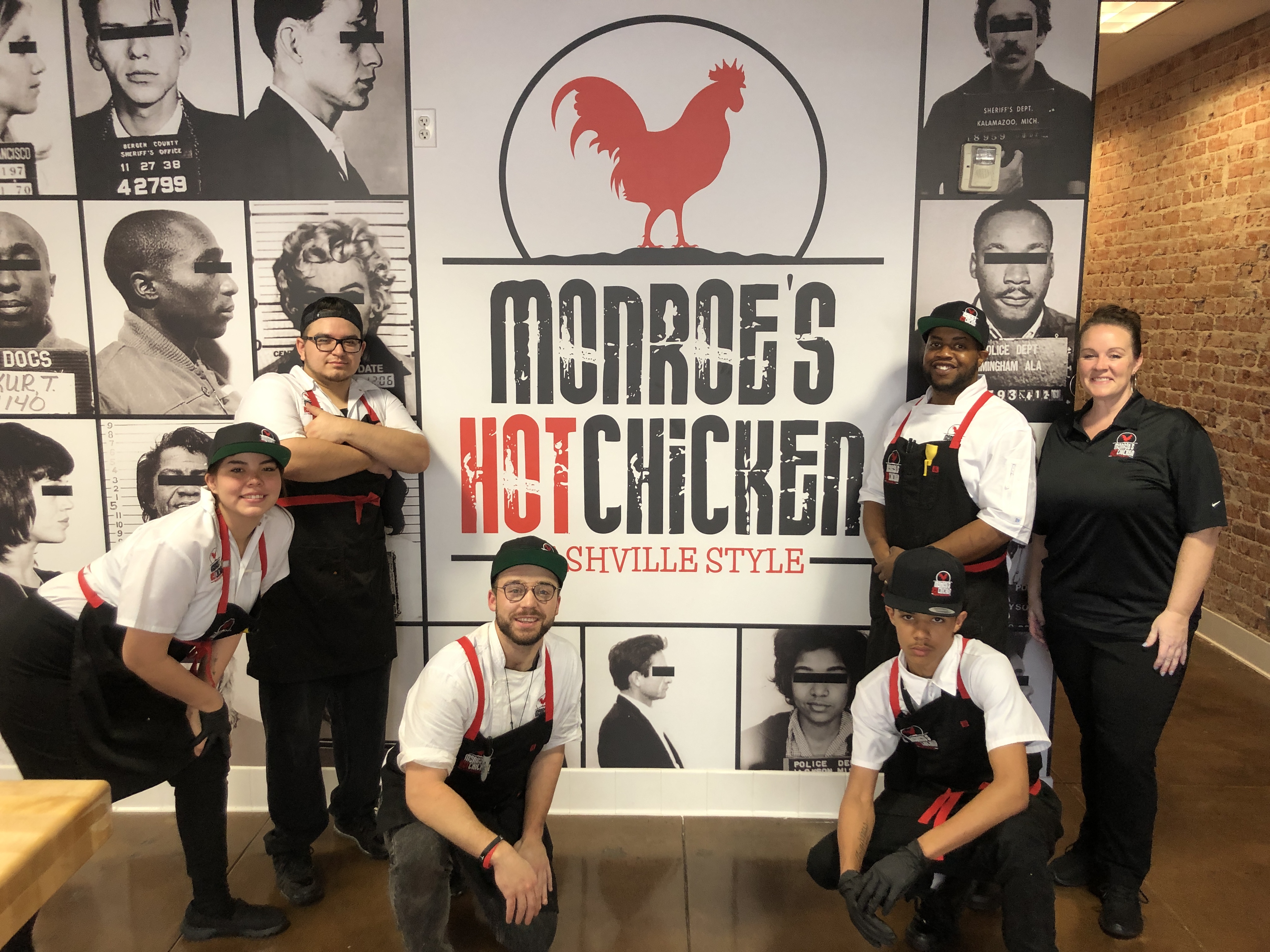 The homemade Tennessee moon pie is decadent and made entirely from scratch — from the soft, fluffy marshmallow middle to the graham cracker cookie layers and even the chocolate coating.

A choose-your-own-adventure root beer float is also an option — arriving as a large cup, filled with with soft serve ice cream, and just enough room to top it off with one of eight self-serve gourmet sodas. Flavors range from lemon acai berry to pineapple cream soda, traditional root beer and more.

Meals are served on red and white checkered paper in white cardboard boxes and rolls of paper towels sit at the center of each table, giving the space a casual picnic feel.
So, one burning question: Exactly, how hot is hot?

The chicken itself doesn’t pack too much of a punch, but diners can kick-up the heat with six different sauces ranging from Southern (sweet, no heat) to Monroe’s signature ‘What da Cluck!’ sauce. It’s so hot a waiver must be signed before purchasing.

Monroe’s Hot Chicken located at 45 W. Jefferson Street. Hours are Monday to Saturday from 11 a.m.-4 p.m. Be sure to follow Monroe’s on Instagram to learn about pop-up hours during major downtown events.