Since Super Bowl Central took over Downtown Phoenix in 2015 — bringing in 1 million people — a lot’s changed in our modest urban center. Just last year, we hosted more than 100,000 fans in one weekend during the College Football Playoff (CFP) festivities. Now here we are in 2017, with the NCAA basketball tournament upon us.
Like the CFP and Super Bowl, the games will be played in Glendale, but the flurry of Final Four fan activities will be headquartered in Downtown Phoenix from March 31 to April 3.
As excitement builds around the next major sports event coming to the Valley, we thought it would be a good time to look back on some major milestones since Super Bowl XLIX came to town.
So much has changed in just two short years, but here’s a handful of the highlights: 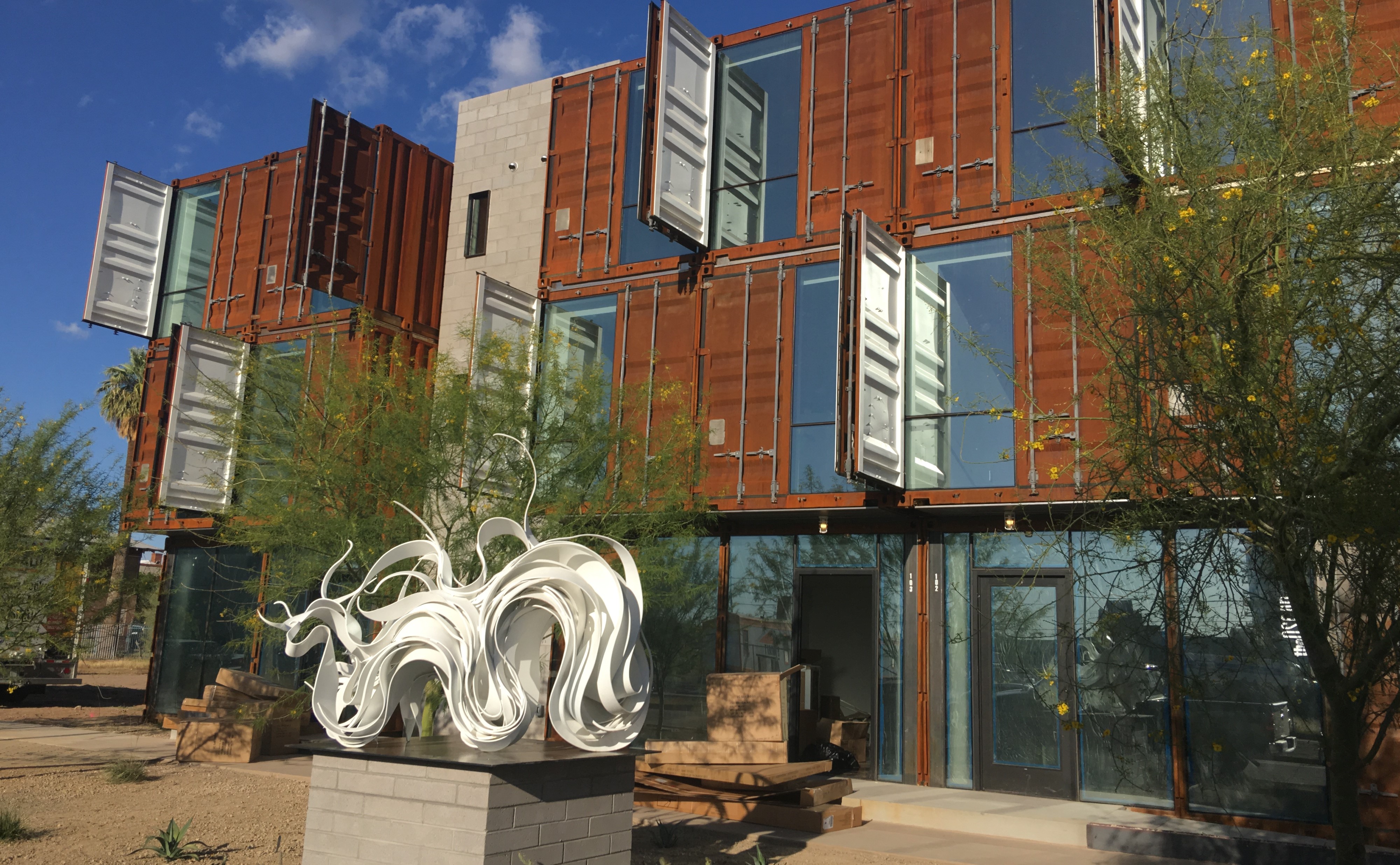 The Oscar is located on the corner of Portland and Second streets, featuring ground floor retail and apartment units. (Photo: Fara Illich)

The trend of taking shipping containers and recycling them into architectural elements for homes hit Phoenix in the fall of 2015, when Containers on Grand opened. The complex features eight 740-square-foot, one-bedroom apartments on Grand and 12th avenues — and it already had a waiting list upon completion.
The same architecture and contracting firm, StarkJames, started building a second installment of shipping container apartments called The Oscar in 2016, and that project is slated to open in the coming weeks.
Fun fact: The Oscar is located at 206 E. Portland St. — just down the street from the March Madness Music Festival in case you want to take a peek. 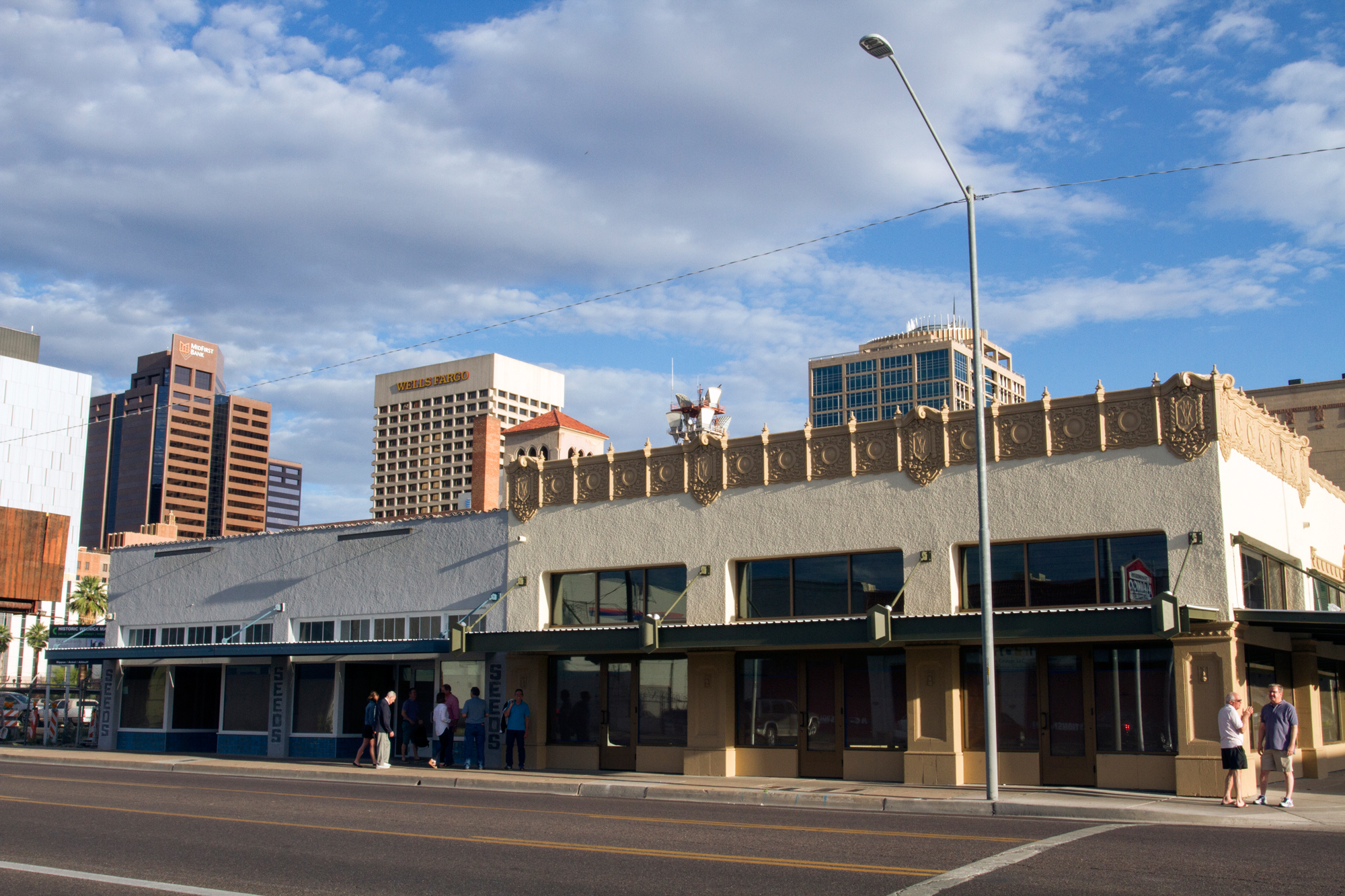 A winning combination of thoughtful investors, savvy builders, support from the city and federal tax credits helped a number of historic buildings come back to life over the past couple of years. The historic C.P. Stephens DeSoto Six Motorcars building reopened as DeSoto Central Market on April 11, 2015. Soon after, construction started on the Welnick Bros. Market and adjacent Liefgreen Seed Company buildings, both built in 1927.
In May of 2015, Kimber Lanning of Local First Arizona stepped in to save the Wurth House, built in 1911, by moving it across the street. It faced demolition after a major land deal — and that property is currently under construction as the Broadstone Roosevelt.
Other buildings restored in 2015: Monroe Abbey, Beth Hebrew Synagogue and Hilton Garden Inn Phoenix Downtown (formerly the Professional Building). In 2016, a number of other adaptive reuse projects got underway including The Dressing Room restaurant, The Blocks of Roosevelt Row mixed use development, Jefferson Place condos and The Van Buren music venue. 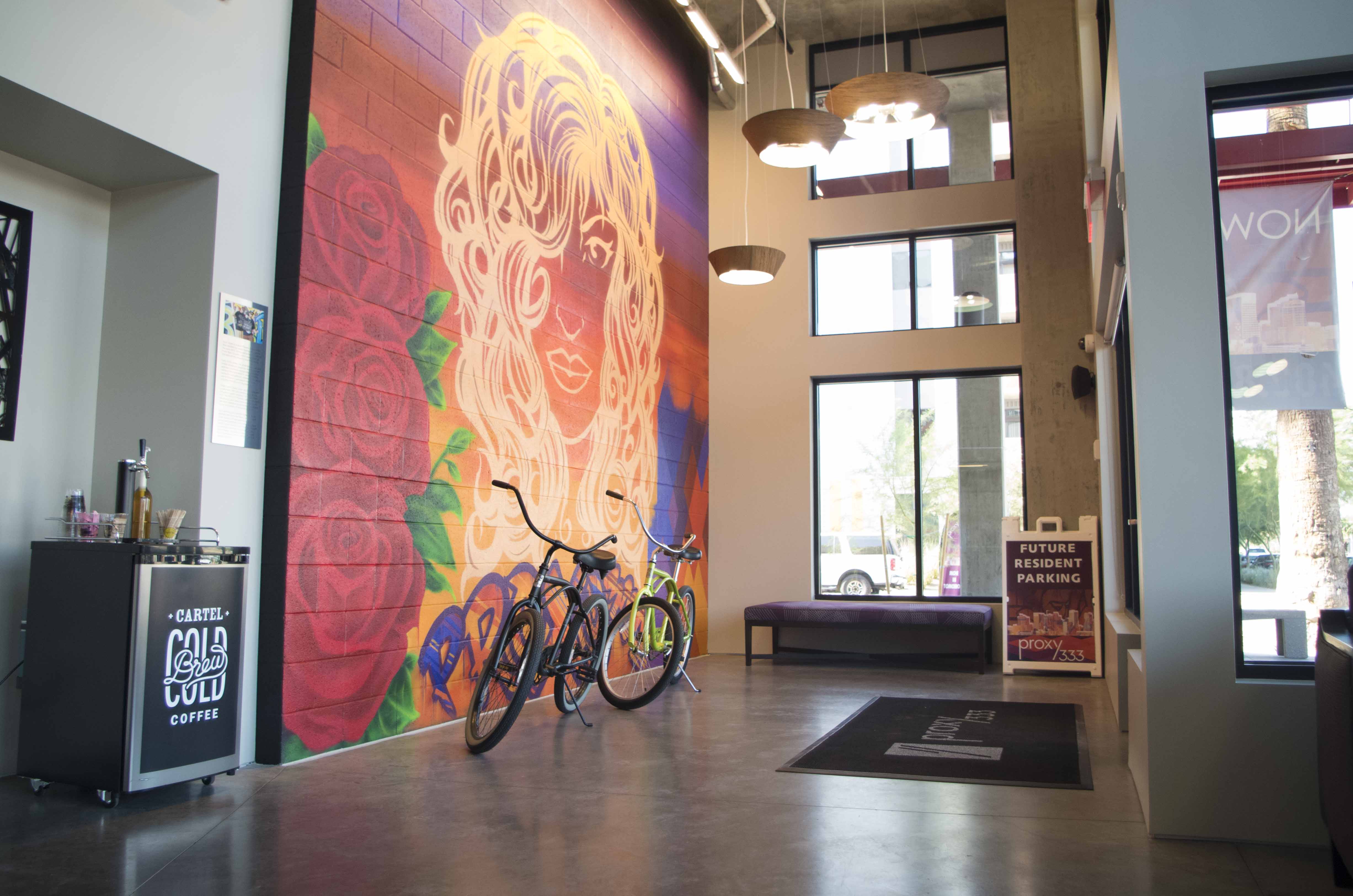 With so many cool things happening downtown, it’s no surprise that demand for housing has skyrocketed. The beginning of 2015 marked the strongest residential growth in years with 302 units under construction and another 2,000 in pre-development. Fast forward to the beginning of 2017, and we now have 1,857 residential units under construction with thousands more in the planning stages.
The changing skyline provides evidence of this immense transformation. In the last two years, Alta Fillmore, Iluminate, Proxy 333, Portland on the Park, Arthaus, Center 8, Grand Avenue Lofts and others welcomed house hunters seeking an urban lifestyle.

Renaissance of the Phoenix Warehouse District 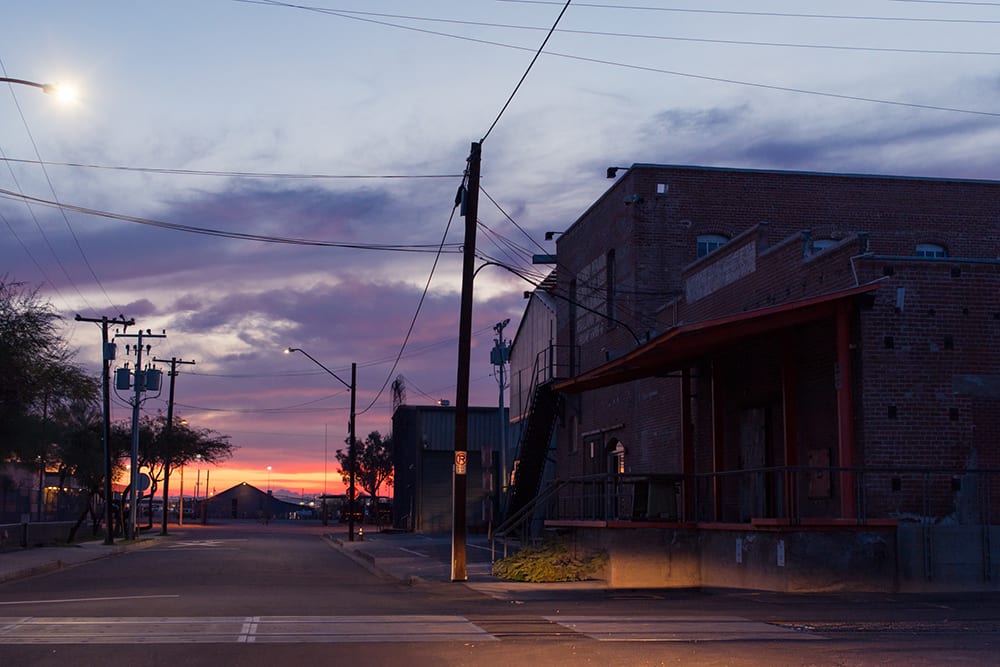 After leasing the Grant Street Studios building in the Warehouse District since 2013, Arizona State University purchased it in 2016, expanding the school’s arts programs and work spaces. (Photo: NBMA Photography)

Longtime property owner-developer Michael Levine, in addition to pioneering companies like CCBG Architects and Dudley Ventures, invested a lot of time and energy over the years in preserving the industrial character of the Warehouse District. That work has finally paid off.
In the last two years, an influx of businesses moved in including WebPT, the Scheduling Institute, Gould Evans, The Croft, IASIS Healthcare Multi Specialty Clinic and others — further defining this area as a business hub.
The computer coding school Galvanize just opened earlier this year and both Seed Spot, an entrepreneur incubator, and landscape architecture firm Norris Design, announced relocation plans in late 2016.

Alleys become places to be used, not reviled 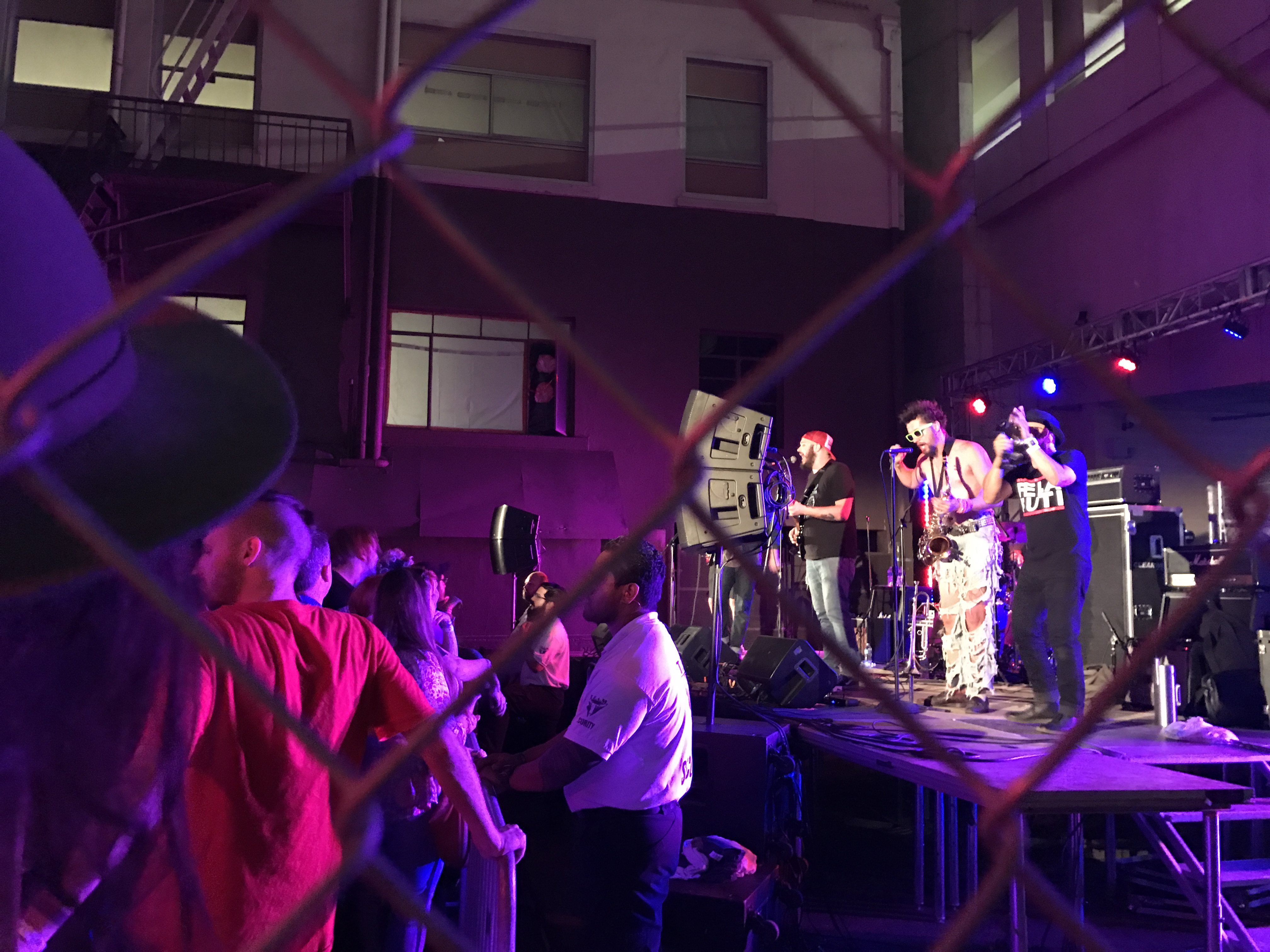 True to the music’s DIY and hard-edged ethic, “Punk Rock Alley” is literally a pop-up stage behind a building next to the dumpsters, and people can’t get enough. (Photo: Lauren Potter)

No longer stinky, unsafe places where ne’er-do-wells congregate, alleys have become downright cool. One of the hippest music venues in the Downtown Core, Valley Bar, opened its doors in 2015 in the basement of a mid-century building at Central Avenue and Monroe Street — complete with an alleyway entrance. The same alley is also home to a punk rock stage during Viva PHX, a multi-venue urban music festival. And across the street, a speakeasy called Melinda’s Alley opened behind the Renaissance Hotel.
So yeah, alleyway entrances to urban drinking dens kind of make sense. But places for food and art? In 2015, Roosevelt Growhouse launched a farm-to-table dinner called CultivEAT hosted in the alley behind the 1920s-era bungalow where it was located (Growhouse has since moved). And just in the last couple of months, a massive mural was completed behind the Arizona Latino Arts and Cultural Center (ALAC). It attracts visitors and Instagrammers in droves.
Even the city has taken note. Late last year, a City of Phoenix subcommittee approved a one-year pilot program to allow “alley activation,” which would make cleanup, beautification and use an easier and more streamlined process.
We know you have instagram
#DTPHX