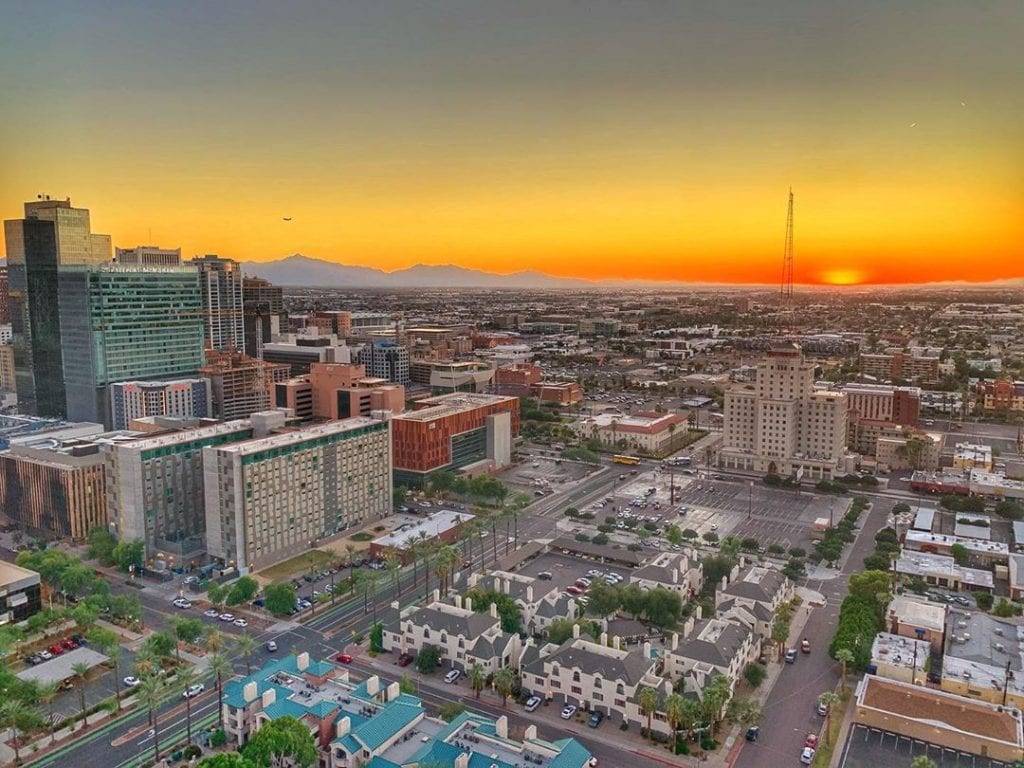 The incredible view from The Link PHX, which opened in October 2019 with the highest rooftop to have a pool, spa, sundeck and lounge in Arizona. (Photo: The Link)

Two thousand nineteen was a great year to live, work, learn and explore in Downtown Phoenix. From art to restaurants and a variety of events, it can sometimes be difficult to remember everything that happened in the past 365 days. Get a refresher on some of the developments, sustainable initiatives and art we added to our city – and some hints to what’s coming in 2020:

We finally got a grocery store in the Downtown Core this year, thanks to RED Development, as well as an assortment of new restaurants and bars.

Earlier in the year, we also welcomed Little Rituals, a cocktail bar and restaurant at the Residence Inn/Courtyard by Marriott, Arizona Wilderness DTPHX to Roosevelt Row and Monroe’s Hot Chicken to Luhrs City Center.

We also got three Bosa Donut shops and a new Mediterranean restaurant, Condesa, took the place of the former Tom’s Tavern space.

The past two years have seen a steady increase in residential completions and groundbreakings, with no sign of slowdown.

We saw our skyline rise with several developments and 1,196 units completed, including The Link – the second tallest residential building in Arizona. Currently, there are 2,483 residential units under construction and another 2,585 in predevelopment.

The Cambria Hotel joined Hampton Inn as our newest hotel offerings. Earlier this year, AC Hotel broke ground at Arizona Center and there are multiple hotels in the pipeline, including a new hotel/office tower at Central Avenue and Adams Street.

The Phoenix Suns signed a lease to remain in Downtown Phoenix until at least 2037, thanks to a city council vote earlier this year to renovate Talking Stick Resort Arena. Construction has begun and should be 60 percent complete before the 2020-21 NBA season, with the second phase completed before the start of the 2021-22 season.

This year, Northern Arizona University reached over 400 students, University of Arizona’s Downtown Phoenix campus was granted to increase class size to 100 per year and Arizona State University broke ground on the Thunderbird School of Global Management.

Public Art in the Core 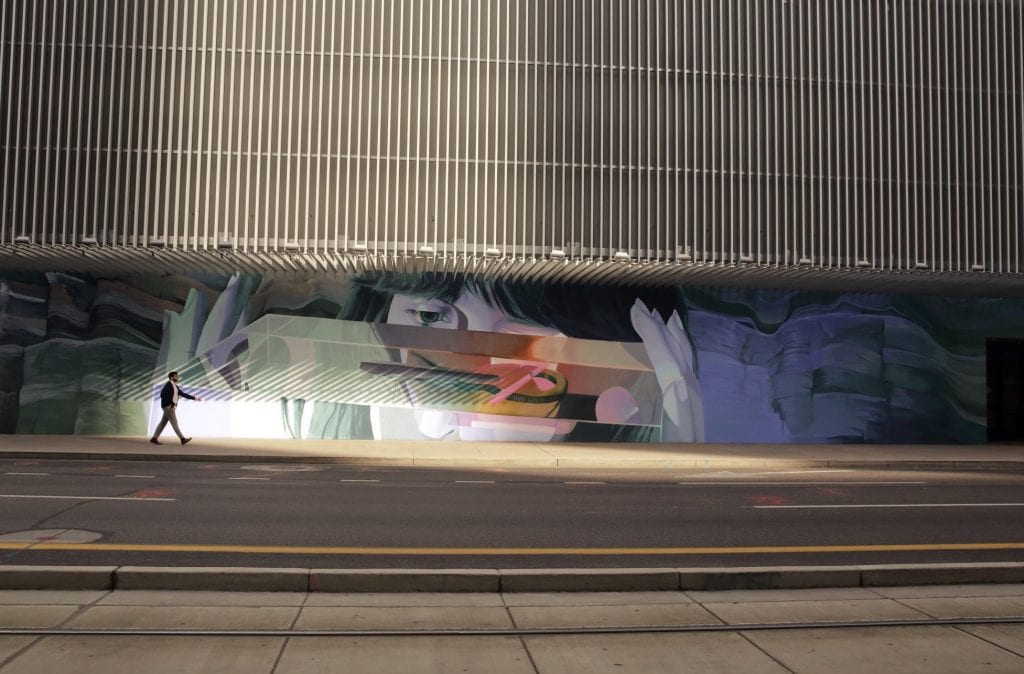 Completed in the fall of 2019, “Timeless” by Clyde is a 144-foot long mural on the west-facing wall of the Renaissance Phoenix Hotel. (Photo: Mycal Kay)

The Giving Meter program tapped into the talents of four local artists — Lydia Quinones, Chelsi Rossi, Terri Petersen and Paige Poppe — who each painted a re-purposed parking meter. The meters are located in four high-pedestrian areas in the Downtown Core, and are equipped to accept card and coin donations for the city’s PHX C.A.R.E.S program.

The walls of Downtown Phoenix were once again a canvas for creativity. Tempe artist Clyde brought cool blues, greens and purple tones to the west-facing wall of the Renaissance Hotel with his mural, “Timeless.”

Artists Kyllan Maney and Jayarr Steiner also collaborated on a piece on the corner of Adams and Second streets, which colorfully features the uplifting message, “you are amazing.” Stay tuned for more murals at Block 23 and 111 W. Monroe next year.

You may have seen this friendly giant on your feed. Inspired by the tech company surge in the area, a large metal robot sculpture by Doug Boyd of Artfully Rogue is at the corner of First Avenue and Monroe Street.

Adding to the public art portfolio of DTPHX, Artlink Inc. opened their ARTLAB in the lobby of the Kimpton Hotel Palomar Phoenix, which features a working public art studio with artists in residence switching out every few weeks.

A pilot program launched on Sept. 16 that brought several hundred Lime, Bird and Spin scooters to Downtown Phoenix. The City will determine if it will continue after the six-month trial ends in March 2020.

More and more DTPHX employees, residents and visitors are choosing to get from Point A to Point B and everywhere in between on two wheels. Downtown Pedal Around and numerous other weekly/monthly group bike rides are helping to change the bike culture in downtown. 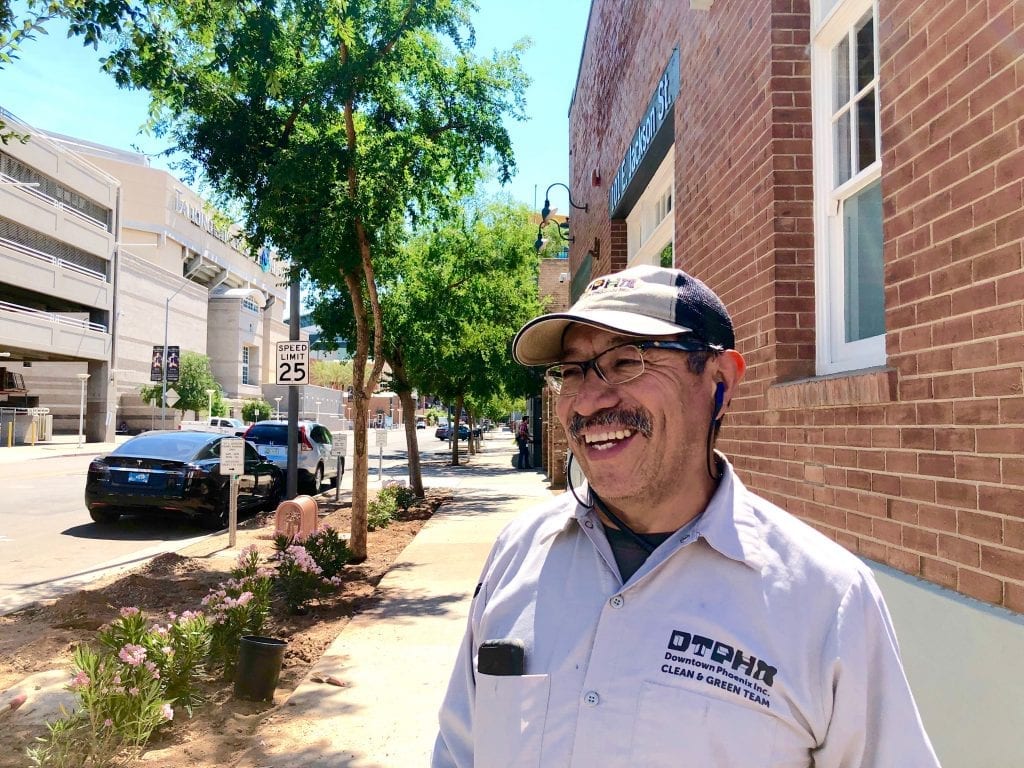 Yep, you read that right. Downtown brought locals and visitors from around the world with events filling more than two thirds of the days and nights of 2019 – a considerable jump from downtown happenings a decade ago.

We saw reoccurring events, like Phoenix Comic Fest and Howl-o-ween, as well as new events including Fried Festival and Phoenix Unknown.

Our growing downtown neighborhood needed a dog park, and the City of Phoenix, Downtown Phoenix Partnership and PetSmart delivered. Thelda Williams Paw-Pup Park is on the northeast corner of Third Avenue and Jefferson Street and is open from 7 a.m. to 9 p.m.

The Fiesta Bowl donated $2 million to build a 20,000-square-foot playground at Margaret T. Hance Park. This is the first piece of the park’s revitalization project to receive a seven-figure donation, with construction beginning in 2020.

The Downtown Phoenix Partnership Ambassador team distributed more than 2,700 gallons of water at these events. Instead of handing out water bottles, the team has a more sustainable Hydration Station – which encourages event goers to use their reusable bottles to fill up.

You can thank the Downtown Phoenix Partnership Clean & Green Team for the much-needed shade in our city. They planted 95 trees and hundreds of other plants in 2019.

Some of these trees were salvaged from sites that will be developed, like the trees at ASU’s Thunderbird School of Global Management.